Tottenham Hotspur will look to pick up another major scalp when they travel to the Allianz Stadium to take on Juventus in the Round of 16 first leg.

The UEFA Champions League moves into the knockout stages this week, with the commencement of the Round of 16. In Turin, one of the fixtures of the round will see Juventus and Tottenham lock horns in the first leg at the Allianz Stadium on Tuesday.

Juventus have turned around their form spectacularly over the last three months, having not lost a single game in their last 16, including 11 successive wins. The Bianconeri progressed to the Round of 16 having finished runners up to Barcelona in Group D.

Tottenham, too, come into the match in buoyant mood, after ending up on the right side of the result in the North London derby last weekend. Mauricio Pochettino’s men were one of the surprise packages of the group stages, eclipsing Real Madrid and Borussia Dortmund to clinch Group H.

The two sides last met in a pre-season friendly in August last year, with Tottenham beating Juventus 2-0 at Wembley. Ahead of their latest meeting, The Hard Tackle takes a closer look at the encounter.

Massimiliano Allegri has a few injury concerns on his hands ahead of the return of Champions League football. On Tuesday, the Juventus boss could be without as many as five first-team players due to various fitness problems.

Juan Cuadrado (hip), Bendikt Howedes and Blaise Matuidi (both thigh) are all certain to miss out on the first leg tie on Tuesday. There are doubts over the availability of Paulo Dybala (hamstring) and Andrea Barzagli (calf), although the duo did train with the entire squad on Monday.

If available, they are only likely to be on the bench, making Dybala’s absence a major one, with the Argentine being the talisman for Juventus this season. His void is likely to be filled by Federico Bernardeschi, with Mario Mandzukic starting on the opposite flank.

The hosts are likely to line up with a midfield trio in order to create overloads in the middle of the park to deny the space to the Tottenham attack and retain control of the possession for longer periods. At the back, Giorgio Chiellini and Medhi Benatia will be the men providing cover to Gianluigi Buffon, with Stephan Lichtsteiner and Alex Sandro the full-backs.

Mauricio Pochettino has no roster issues to deal with ahead of the big trip to Turin on Tuesday. But, it is being widely reported that the Tottenham boss has left Toby Alderweireld back home, snubbing the Belgian defender for a second game running as he continues to work on his fitness post recovery from hamstring injury.

In his absence, Davinson Sanchez and Jan Vertonghen should continue at the heart of the Tottenham defence once again, with the reliable duo of Kieran Trippier and Ben Davies flanking them. The back-four though, will need to be wary about aerial through balls towards Gonzalo Higuain and Mandzukic, particularly from Miralem Pjanic.

This is where the midfield duo of Mousa Dembele and Eric Dier comes in, with the former in particular the one who will be tasked with the pressing duties, alongside Dele Alli. In attack, Son Heung-Min and Christian Eriksen will share the creative responsibilities, with the link-up of Harry Kane crucial. 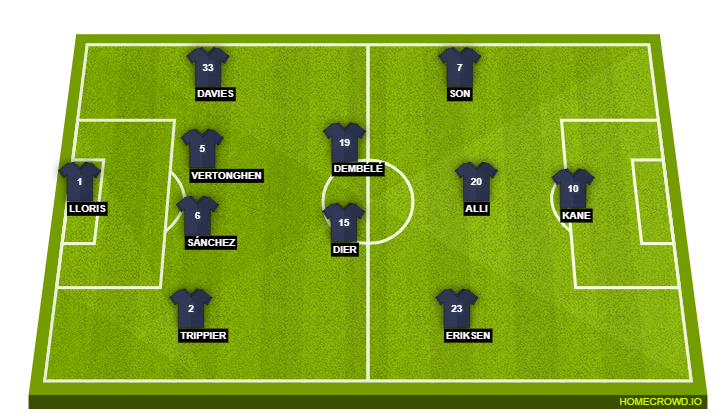 Speaking of Kane, the Tottenham hitman will be the key figure for his side once again, having shown his best form in Europe this season. The winner in the North London derby will spur him on as well, and it really is going to be a tall order for the fabled Juventus defender to stop the Harry Kane juggernaut.

Tuesday’s game at Allianz Stadium is easily one of the ties of the Round of 16, and more so because of the kind of form these two sides have shown in recent weeks. Neither side has lost a single game this year, meaning these two are the most in-form side heading into the Champions League knockout stages.

This is arguably going to be the biggest test yet for the Juventus defence, that has been imperious over the last two months. But, they really are a hard nut to crack at home, and despite the attacking riches at Mauricio Pochettino’s disposal, it is hard to look past the hosts on this one. We predict a close contest, with Juventus edging Tottenham by the odd-goal.