Premier League action returns quickly this weekend after the midweek round of fixtures with Gameweek 26. On Saturday, the evening kick-off sees Manchester United hoping to move over their disappointing midweek loss when they play hosts to Huddersfield Town at Old Trafford.

The aforementioned 2-0 loss to Tottenham Hotspur aside, Manchester United have been in fine form in 2018, winning each of their five previous matches in all competitions this year year without conceding a single goal. The defeat on Wednesday though, has put them under pressure, with fifth-placed Spurs just five points behind.

Huddersfield, too, are coming into Saturday’s game on the back of a loss, with Liverpool cruising to a 3-0 win over them at the John Smith’s Stadium on Tuesday. Their form apart from the midweek result has been poor as well, with the defeat stretching their winless run to seven in the Premier League.

The reverse fixture, played back in October at the John Smith’s Stadium, ended in a shock 2-1 win for Huddersfield, with Manchester United only managing a late consolation goal through Marcus Rashford. Ahead of their latest meeting on Saturday, The Hard Tackle takes a closer look at the encounter.

Jose Mourinho does not have many injury concerns on his hands ahead of the visit of Huddersfield. But, the Manchester United boss will be without three key first-team players on Saturday, with Marouane Fellaini the latest player on the treatment table.

The Belgian midfielder had a recurrence of the knee injury that has troubled him for the last three months, and is on the sidelines once again. Zlatan Ibrahimovic (hamstring) and Eric Bailly (ankle) are long-term absentees, although Mourinho is hopeful that the duo will return by the end of the month.

While the rest of his first-choice players are available to him, the Manchester United manager might just make a few changes as far as personnel and tactics are concerned. One player who looks the likeliest to return is Luke Shaw to replace Ashley Young, with the young defender has impressing in the chances afforded to him.

Ander Herrera might return in place of Jesse Lingard as well, in order to facilitate a chance to a three-man midfield to bring the best out of Paul Pogba. Another player who could return to the side is Marcus Rashford, with Anthony Martial failing to impress against Tottenham in the midweek loss.

The change to a 4-3-3 should give Pogba the license to burst forward while also enabling Nemanja Matic to share his defensive duties in midfield with Herrera. Alexis Sanchez should again be handed a free role. Alternatively, Juan Mata could start in place of Herrera too, if Mourinho chooses to stick to his preferred 4-2-3-1.

David Wagner has a few pressing injury concerns hampering his preparations for the game against Manchester United ahead of the trip to Old Trafford. On Saturday, the Huddersfield boss could be without as many as six first-team players.

Jon Gorenc Stankovic (ACL) and Elias Kachunga (MCL) are certain absentees, while the likes of Scott Malone (knock), Danny Williams (leg), Terence Kongolo (illness) and Chris Lowe (groin) are doubtful for the game, and will have their fitness assessed before the game.

Apart from the major concerns with respect to fitness, Wagner also needs to sort his side’s playing style on the field. Teams seem to have found a way around Huddersfield’s high pressing style of play, with the Terriers unable to sustain the high level of energy required for the system to flourish.

A slight change in the formation might be in the offing too, with a 3-4-3 system likely to be implemented to not just have numbers in midfield, but also in the wide areas with Rajiv van la Parra and Tom Ince. The duo will be tasked with supporting the wing-back on their respective flanks while defending, while creating overloads inside the box by drifting in from wide areas. 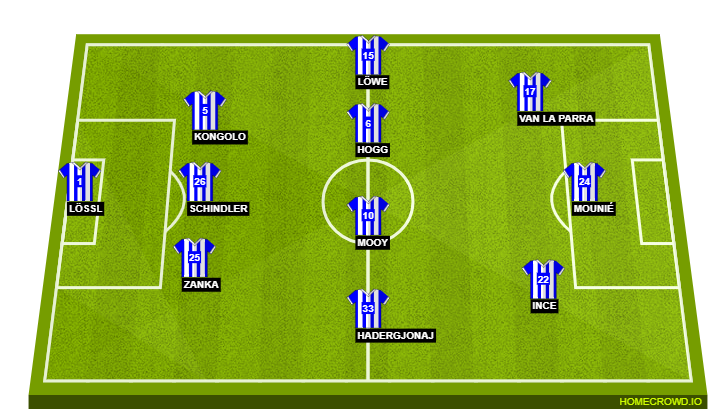 His Manchester United debut was impressive, but the league debut was one to forget. Now is the time for Alexis Sanchez to make his debut at Old Trafford, and he will hope to produce a performance similar to the one against Yeovil than the one against Tottenham.

Regardless, his energetic and nippy style of play will be important to negate Huddersfield’s pressing and create the space for the likes of Paul Pogba, Marcus Rashford and Romelu Lukaku to take advantage of. Time has come for the Old Trafford faithfuls to wax lyrical about the diminutive Chilean.

Manchester United would be smarting from their 2-0 loss to Tottenham on Wednesday, and we can expect a huge reaction from Jose Mourinho & co. Huddersfield Town, on the other hand, are struggling to win games, and confidence must be starting to become an issue.

This time around, the Terriers might just ditch their high pressing style to sit back and absorb the pressure in a bid to take something away from a daunting game. But, the quality at Mourinho’s disposal means anything other than a Manchester United win would be shocking, and The Hard Tackle predicts a comfortable 2-0 victory.