The second Carabao Cup finalists will be confirmed on Wednesday when Arsenal host Chelsea at the Emirates in the semi-final second leg.

Manchester City confirmed their safe passage to the Carabao Cup final by narrowly beating Bristol City on Tuesday. On Wednesday, the Citizens will know their opponents when Arsenal and Chelsea meet at the Emirates in the second leg of their semi-final.

The hosts only barely managed to scrape through by the odd goal in each of their previous ties in the competition, and are the lowest scorers in the League Cup this season. Chelsea, too, only won by the odd goal in two of their three previous games, with their opening contest ending in a convincing 5-1 win.

Both teams have been struggling of late, though, only managing to overturn their respective winless runs last weekend. While Arsenal overturned a five-game run by emphatically beating Crystal Palace 4-1, Chelsea saw off Brighton & Hove Albion convincingly in a 4-0 win.

The first leg, played two weeks ago at Stamford Bridge, ended in a goalless draw, leaving it all to be done in the second leg. Ahead of the fifth meeting between Arsenal and Chelsea this season, The Hard Tackle takes a closer look at the encounter.

Arsene Wenger’s injury woes have eased up considerably ahead of the visit of Chelsea on Wednesday. The Arsenal boss will just be without five first-team players in the crucial second leg encounter due to different restrictions.

Olivier Giroud (hamstring) and Santi Cazorla (Achilles) are long-term absentees who have been joined by Nacho Monreal (ankle) and Danny Welbeck (groin) on the treatment table. There are doubts over the availability of Aaron Ramsey as well, but the Welshman should be in contention to feature for Arsenal.

New signing Henrikh Mkhitaryan is unavailable though, having featured for previous club Manchester United in the quarter-finals against Bristol City. With Alexis Sanchez no longer an option, Alex Iwobi becomes an almost automatic selection in attack for the Gunners, alongside Mesut Ozil and Alexandre Lacazette.

Ozil, in particular, will be key, with his link-up with Lacazette as well as his creative abilities, which could make all the difference in the end. With Monreal unavailable, the impressive Calum Chambers is likely to get another chance to make a mark, although he would be hoping for better fortunes against Chelsea after their previous clash in North London.

The onus will also be on the wing-backs – Hector Bellerin and Ainsley Maitland-Niles – to keep their respective counterparts in check while also driving forward with pace and intent to support the attackers.

Conte does not have many injury concerns on his hands ahead of the trip to Arsenal, with more players returning than out. The Chelsea boss will be without just two first-team players on Wednesday, with four players set to return from their respective layoffs.

Alvaro Morata has picked up a back problem, and is on the sidelines alongside Cesc Fabregas, who is recovering from a hamstring injury. But, Andreas Christensen is fit and available after initially giving Conte a scare with his head injury.

The likes of Gary Cahill (hamstring), Danny Drinkwater and Thibaut Courtois (both ankle) could be in contention as well, although they face a late fitness test to determine their availability. If Cahill recovers, Christensen could be given the night off to complete his recovery, with David Luiz another option at Conte’s disposal.

Conte’s major selection headache is upfront, with Michy Batshuayi expected to retain his place in Morata’s absence. The Chelsea manager could also pick Eden Hazard in the false nine role, although Batshuayi cut a much improved figure over the weekend against Brighton.

The match could also serve as the debut for Ross Barkley after the new signing missed out on his chance against the Seagulls. But, he is only likely to feature from the bench, with Tiemoue Bakayoko paving the way for a more solid midfield duo with N’Golo Kante. 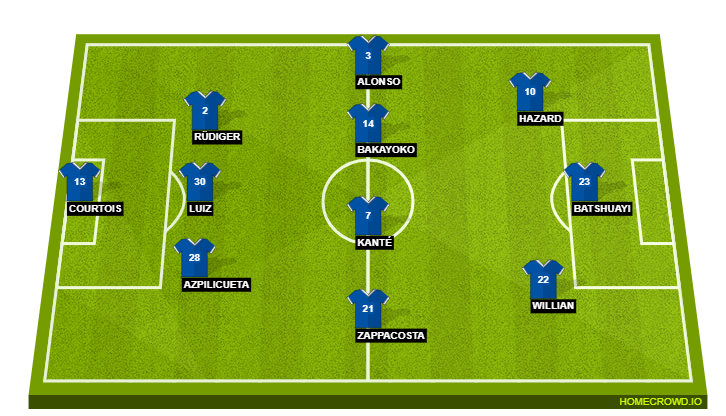 With Alexis Sanchez gone and Henrikh Mkhitaryan ineligible to feature, the creative burden will rest majorly on the able shoulders of Mesut Ozil on Wednesday night. His link-up with Alexandre Lacazette has been consistently improving, and that looks like the only way Arsenal can secure the big win against the Blues.

Regardless of everything, the German is the lynchpin for the Gunners, and if he performs at his best, Arsene Wenger & co. will fancy their chances against a Chelsea side that has been struggling for goals of late.

Arsenal and Chelsea renew their rivalry on Wednesday for the fifth time this season, when the stakes are too high, with the first trophy of the season involved. With a Premier League triumph nearly impossible, the Carabao Cup presents to both a realistic chance to win silverware this season.

Arsenal are slight underdogs according to bookmakers with the best betting sites placing them at 2.80 compared to Chelsea, who are at 2.62.

But, Arsenal tend to lift their game in the latter stages of cup competitions, and while the absence of Sanchez will be telling, the Wilshere-Ozil combo might just do the trick. Antonio Conte seems to struggle against Arsene Wenger, and it should just be more of the same on Wednesday, with Arsenal clinching a close win.