Liverpool will look to go level on points with Chelsea when they travel to the Liberty Stadium to take on Swansea City on Monday.

Gameweek 24 of the Premier League draws to a close on Monday at the Liberty Stadium. Swansea City play hosts to Liverpool, in a match that has some high stakes in battles on the opposite ends of the table.

Swansea City are still rock bottom in the Premier League, although their form has improved marginally since the appointment of Carlos Carvalhal. A win on Monday would still leave the Swans on 20th, but they can get three points away from safety.

Liverpool, on the other hand, last suffered a defeat way back in October and have silently gone about their job of climbing up the Premier League table. A win against Swansea would leave the Reds level on points with Chelsea, and three adrift of second placed Manchester United.

The reverse fixture, played last month, saw Liverpool cruising to a 5-0 win over a hapless Swansea side. Ahead of their latest meeting on Monday, The Hard Tackle takes a closer look at the encounter.

Carlos Carvalhal does not have a lot of pressing issues hampering his preparations for Monday, with no player struggling with a long-term injuries. While four players are doubtful for the visit of Liverpool, all of them are likely to be available.

Mike van der Hoorn (muscle injury), Renato Sanches (hamstring) and Angel Rangel (calf) are all off the treatment table, and are likely to be in contention. Tammy Abraham is a major doubt due to a hip injury that has sidelined him for the last four matches, and he will be assessed ahead of the game.

The return of Wilfried Bony has given the Swansea boss a huge reprieve though, with the Ivorian in some fine form before he succumbed to a hamstring injury. Bony is likely to don the armband on Monday and he will hope to lead his side from the front.

The primary focus though, will be on restricting the formidable Liverpool attack by shoring up the back-line and defending with numbers. A five-man back-line might just be the solution to thwart the menacing frontmen that the Reds have, with a centrally placed midfield trio also looking to deny the visitors the space they need to create chances. 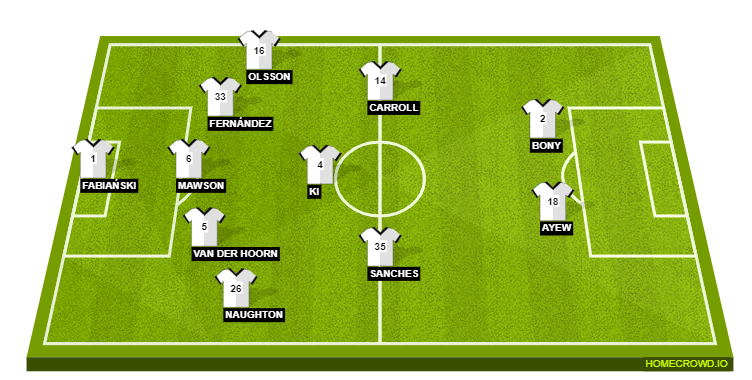 Unlike Carvalhal, Jurgen Klopp does have a few players on the treatment table, although it not affecting the composition of his preferred team much. The Liverpool boss will be without three players on Monday for the visit to the Liberty Stadium due to injury, with two more working their way back to fitness.

Daniel Sturridge (hamstring), Danny Ward and Nathaniel Clyne (both back) are sidelined, although the latter should be available for his first game of the season next month. Jordan Henderson (hamstring) and Alberto Moreno (ankle) have returned to training, but Monday’s game has come too soon for them.

There was a scare surrounding the availability Mohamed Salah, Dejan Lovren and Ragnar Klavan due to illness, but the trio are expected to be in the travelling squad on Monday. The presence of Salah is all the more important as Liverpool will look towards him for the goals once again.

The key man up front will be Roberto Firmino who, with his movement, will look to drag defenders wide and high to create space for Salah and Sadio Mane to drift in and get scoring opportunities. In defence, Virgil van Dijk is set to make his league debut for Liverpool, and his presence will boost defence considerably.

His Liverpool debut couldn’t have gone any better as Virgil van Dijk headed home the winner against Everton in the FA Cup. But after missing the stirring win over Manchester City last weekend, the Dutch defender will be itching to make his league debut for the Reds and get into the thick of things.

Monday’s game will give him that opportunity, perhaps the perfect game to get settled into his new side, with Swansea struggling to create chances consistently, let alone score goals. His return to fitness will also boost the Reds immensely in the long run, and Jurgen Klopp will hope this heralds the start of a successful stint.

Swansea have turned their form around recently, even if it’s ever so slightly, and the initial signs under Carlos Carvalhal have been positive. But, in Liverpool, the Swans face one of the Premier League’s most menacing sides, making this a seemingly impossible obstacle to clear.

The Reds have not had the best of times at the Liberty Stadium in the last few seasons, but they are hands down the most in-form side in the English top-flight. Anything other than a Liverpool win will be nothing short of shocking, which is why The Hard Tackle predicts a comfortable 3-0 win for the Reds.