Third place will be up for grabs when Inter Milan and AS Roma face off in a mouth watering clash at San Siro on Sunday.

Serie A action has resumed this weekend following the much needed winter break, and the marquee event of the gameweek takes place on Sunday. Inter Milan play hosts to AS Roma at San Siro, hoping to keep a firm hold on third place on the table.

Inter’s early season form seems to have disappeared, with the Nerazzurri failing to win any of their last seven games in all competitions. Three draws and two losses in the Serie A has left them third on the table, trailing Juventus and Napoli considerably, which has left them with a bleak chance of mounting a title run.

AS Roma, too, are going through a patchy run of form, having managed to win just one of their last five games in all competitions over the last one month. As a result, the Giallorossi have dropped down to 5th on the league table, three points adrift of Inter.

The reverse fixture, back in August, ended in a convincing 3-1 win for Inter as Mauro Icardi led his side through a brace. Ahead of their latest meeting on Sunday, The Hard Tackle takes a closer look at the encounter.

Luciano Spalletti does not have a lot of pressing injury concerns to deal with ahead of the visit of Roma. On Sunday, the Inter boss will be without just two first-team players, with Zinho Vanheusden and Danilo D’Ambrosio on the sidelines due to their respective injuries.

There is some good news in defence though, with Miranda likely to be available for selection and Lisandro Lopez another player who Spalletti can count on following his loan move from Benfica. The Argentine defender might have to bide his time though, with Miranda and Milan Skriniar expected to line up at the heart of defence.

In D’Ambrosio’s absence, Joao Cancelo is likely to continue at the right side of defence, with Davide Santon the left-back. In midfield, Roberto Gagliardini, Matias Vecino and Borja Valero will sit in front of defence to add steel in the middle of the park and stop the Roma attack in its tracks.

The key men will be Ivan Perisic and Antonio Candreva, who will need to supply balls to Mauro Icardi with good effect to give the hosts an upper hand. At the same time, Perisic, in particular, will also need to share the attacking burden with the Inter captain.

Like Spalletti, Eusebio Di Francesco has just one major absentee in Diego Perotti, who is recovering from a thigh injury. Other than the Italian winger, Rick Karsdorp and Gregoire Defrel are the other players unavailable, due to their respective problems with their knees.

Perotti’s void is likely to be filled by Gerson on the right side of attack, with Stephan El Shaarawy on the opposite flank. The duo will flank the prolific Edin Dzeko, but unlike Inter, the goalscoring burden is more evenly distributed, with El Shaarawy starting to find his feet in attack.

Much like Inter though, Di Francesco will have a three-pronged midfield unit, which should feature Maxime Gonalons, Kevin Strootman and Daniele De Rossi. While De Rossi is expected to do more of the dirty work in the middle of the park, Strootman will look to link up with the attackers.

In defence, Aleksandar Kolarov will be another key man, particularly with his attacking pursuits, as his pinpoint crossing should pose a lot of problems to the Roma defence. At the heart of defence, Kostas Manolas and Federico Fazio will need to keep things tight and be wary of not leaving a lot of space for Icardi to exploit. 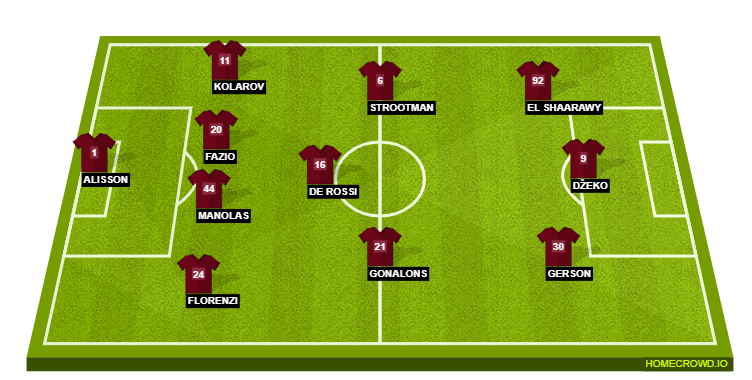 Things haven’t been easy for Inter over the last month or so, with goals hard to come by, as well as wins. In this period, Mauro Icardi has been the only player who has managed to remain consistent to a certain extent, scoring the bulk of the goals for the Nerazzurri.

On Saturday, he will need to have his scoring boots on once again. Otherwise, Inter stand to be in for a long night against an AS Roma side that might not have been consistent, but still tend trouble opposition defenders on a more regular basis as the hosts.

Clashes featuring Inter Milan and AS Roma almost always tend to serve up classic encounters, keenly contested between the two sides and Sunday should be more of the same. This might end up being more of a midfield battle though, with chances coming few and far between.

The attacking players, as a result, will need to be clinical enough to convert the chances that come their way. In the end, the game could hinge on the slimmest of margins, which is why The Hard Tackle predicts a 1-1 draw.