Atletico Madrid will look to consolidate second spot in the La Liga table when they travel to the Ipurua to take on Eibar on Saturday.

The Copa del Rey quarter-finalists have been decided in Spain, and the focus returns to La Liga this weekend. At the Ipurua, a high flying Eibar side will play hosts to Atletico Madrid on Saturday, hoping to take another big step towards a possible place in Europe.

Jose Luis Mendilibar’s men have built brilliantly on the success of last season, when they finished 10th on the La Liga table. This time around, the Basque club sit 7th on the table, a mere two points adrift of fifth-placed Sevilla, having last lost a game more than two months ago.

Atletico Madrid, on the other hand, have not been consistent enough to remain within touching distance with league leaders Barcelona. Diego Simeone’s men, though, are the best of the rest, having lost just one game so far this season, with Real Madrid a massive seven points behind them, albeit with a game in hand.

The corresponding fixture last season ended in a convincing 2-0 win for Los Rojiblancos, with Antoine Griezmann and Saul Niguez finding the back of the net. Ahead of their latest meeting on Saturday, The Hard Tackle takes a closer look at the encounter.

Jose Luis Mendilibar has a number of roster issues to contend with ahead of the visit of Atletico Madrid. The Eibar boss is set to be without as many as seven first-team players on Saturday due to injuries and suspension.

The biggest absentee is defender Anaitz Arbilla, who misses out due to suspension. The likes of Pedro Leon, Fran Rico (both knee), Ander Capa (muscular), Yoel Rodriguez (ACL), David Junca and Ivan Ramis (both thigh) are all unavailable due to their respective injury concerns, although some of them are inching closer to a return.

Eibar has also bid adieu to Christian Rivera, who has joined Barcelona on a loan deal until the end of the season.

When in possession, the hosts will look to create a 3v2 situation to keep hold of the ball for longer periods, with Dani Garcia key as an enabler. The focus will also be on attacking with pace in the wide areas to catch the visitors off guard and test the defence with an onslaught of crosses, with the hosts the strongest side in the league in that regard. 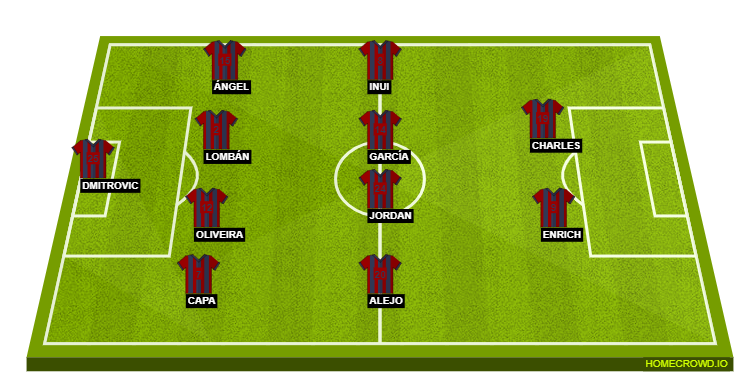 Atletico Madrid have kicked off 2018 in fine fashion, scoring nine goals and conceding none so far. And their positive showings have also been helped by the fact that Diego Simeone has very little pressing injury concerns to deal with, although he does have three players suspended heading into Saturday’s

Stefan Savic, Gabi and Diego Costa – sent off in his first La Liga game since joining from Chelsea – are all set to miss the trip to the Ipurua due to a one-match ban. The likes of Hector Hernandez (stomach), Axel Werner (unspecified) and Filipe Luis (thigh) are all doubtful, with the latter’s problem the only major concern for the Atletico Madrid boss.

In Luis’ absence, Lucas Hernandez could be deployed as the makeshift left-back, with Diego Godin and Jose Gimenez at the heart of defence and Sime Vrsaljko the right-back. The onus, as always, will be on the likes of Antoine Griezmann, Yannick Carrasco and Saul to take the game to the opposition defence.

Thomas Partey, likely to replace Gabi, will also be a key man to negate Eibar’s hard pressing style, by providing an additional outlet in midfield. At the back, Godin will be marshalling his back-line to kill off space and give away very little scoring opportunities.

2017-18 has been a rather mixed campaign so far for Antoine Griezmann, who has not looked anything like the player who once finished third behind Cristiano Ronaldo and Lionel Messi in the Ballon d’Or race.

But, having found the back of the net five times in his last eight outings, there are signs that a turnaround in form could be in the offing. Against an Eibar side that have been no pushovers, the French attacker’s movement will be important to open the defence up, in addition to his eye for goal.

Eibar have continued to surprise the entire league, carrying over from the last season. Backing their natural game, Los Armeros have seldom been awed by the occasion of playing a big team, which should again be the case on Saturday, setting up a mouthwatering clash at the Ipurua.

But, Atletico Madrid have a strong record against Eibar, with Diego Simeone also dominating his personal head-to-head battle against Jose Luis Mendilibar. The match should be closely contested, although Los Rojiblancos have enough firepower to just scrape through, which is why we predict a 2-1 win for the visitors.