Real Madrid will look to get back to winning ways in La Liga when they travel to Balaidos to take on Celta Vigo on Sunday night.

La Liga action has resumed this weekend after a long winter break. On Sunday, Real Madrid will be aiming to shrug off the massive disappointment of their El Clasico loss before the break, when they face Celta Vigo at Balaidos on Sunday.

Celta Vigo have blown hot and cold once again this season, failing to win back-to-back games even once in La Liga. The inconsistent run has seen them languish in 12th place on the table, although they have stepped up in the bigger games, as evidenced by the 1-1 draw against Barcelona on Wednesday.

Real Madrid, too, have been extremely poor this season. Los Blancos are enduring one of their worst league campaigns in recent history, and a gamut of poor results has seen them fall a massive 14 points adrift of Barcelona. Zinedine Zidane’s men are also lagging behind in the race for second spot, and will need to step up in the second half of the season.

The two sides last met in the Copa del Rey Quarter-finals last season, with Celta Vigo claiming a shock 4-3 aggregate win over Real Madrid. Ahead of their first meeting of the current campaign, The Hard Tackle takes a closer look at the encounter.

Zinedine Zidane has a few major roster issues to contend with ahead of the visit to Balaidos. The Real Madrid boss is set to be without three key first-team players on Sunday, with captain Sergio Ramos the latest player sidelined due to a calf strain that will keep him out of action for two to three weeks.

Karim Benzema is on the treatment table as well after sustaining a hamstring injury during the El Clasico. Dani Carvajal is the third player unavailable as he serves his one-match ban for being sent off in the game against Barcelona.

Carvajal should be replaced by Achraf Hakimi on the right side of the Real Madrid defence, while Nacho and Raphael Varane are likely to be the central defensive partnership in the absence of Ramos. Benzema’s unavailability should see Gareth Bale line up alongside Cristiano Ronaldo upfront.

Meanwhile, Zidane should stray clear of the high pressing approach that he employed against Barcelona, and instead focus on being direct through Ronaldo and Bale. Isco, Toni Kroos and Luka Modric will be the men assisting the front duo with their incisive passing. Marcelo and Achraf will be key too, with their pacy outlet on the flanks.

Unlike Zidane, Juan Carlos Unzue does not have a lot of injury problems bothering him. The Celta Vigo boss has a near-full strength squad at his disposal, with just Kevin Vazquez on the sidelines, recovering from a foot injury.

With the defender only a backup to Hugo Mallo, Unzue can name his first-choice starting lineup in an attempt to claim another shock win over Real Madrid. Ruben Blanco should be the man between the sticks, and the young shot stopper is expected to be peppered with a barrage of shots.

In front of Blanco, Gustavo Cabral and Sergi Gomez will be instructed to keep things tight and compact to frustrate Ronaldo and Bale, prompting them to take shots from distance.

The key men though, will be those upfront, with Unzue likely to play to his side’s strength and use pace and directness from the wings to test a Real Madrid defence that has been highly vulnerable this season. Pione Sisto and Iago Aspas will, therefore, be the men to look out for, with Maxi Gomez the focal point of attack. 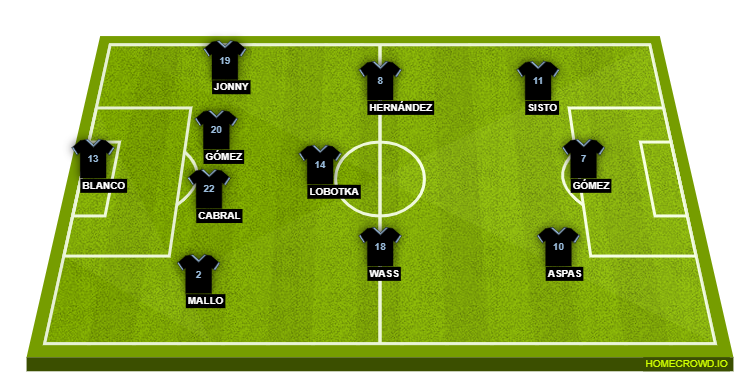 Iago Aspas’ career has taken off since he moved back to Celta Vigo in 2015, and in two years’ time, he has well and truly established himself as the talisman of the side. This season, the player has come into his own, even as the Galician side has struggled for consistency.

With 11 goals from the first 16 games, it is clear that Aspas has been the most in-form players in La Liga, and he looks well on course to book his ticket to Russia 2018 with Spain. On Sunday, he will again be a player under the spotlight, with his deadly change of pace, and a game changing outing can further enhance his reputation.

Things have spiralled out of control for Real Madrid this season, with the defending champions being strangely out of sorts. The current situation leaves just about every league game as a must-win, and they should treat Sunday’s game as one too.

Celta Vigo, on the other hand, may have struggled for consistency, but have pulled their socks up in the bigger games, as evidenced by two draws against Barcelona.

But, considering Cristiano Ronaldo’s history against them, coupled with Gareth Bale looking in fine form upon return from injury, and Real Madrid might just nick a keenly contested game. The Hard Tackle predicts a close shave for the visitors – a 2-1 win.