The frenzy of the Premier League festive fixtures finally come to an end on Thursday. The final match of the exciting period should be a mouthwatering one, as Tottenham welcome West Ham to Wembley, hoping to get the better of their bitter rivals for the second time this season.

Tottenham seem to have found their way again after a brief lull in November that saw them go on a four-game winless run. Mauricio Pochettino’s men have now won six of their last seven games, with the only unsatisfactory result coming against Manchester City. A win on Thursday would see them come within a point of Liverpool, who are fourth.

West Ham, too, have had decent results to boast in the last few weeks, the biggest scalp being that of champions Chelsea in this period. With just a solitary loss in their last six league games, David Moyes & co. have certainly built up some momentum. The come-from-behind 2-1 win over West Brom was evidence of the same.

The two sides have already met twice this season, each winning a game, with the result of both games being 3-2. Ahead of their latest, potentially fiery meeting on Thursday, The Hard Tackle takes a closer look at the encounter.

While his side’s form has been on the rise in recent weeks, Mauricio Pochettino also has the good fortune of having very few injuries to contend with. Heading into Thursday’s encounter, the Tottenham boss is without just Toby Alderweireld (hamstring) and Danny Rose (knee), although the problems do make defence a bit of a concern.

Victor Wanyama and Mousa Dembele are the latest players off the treatment table, with the former making just his third appearance of the season. The duo’s return to fitness bodes well for Pochettino, giving him plenty of quality options in midfield.

After appearing off the bench on Tuesday against Swansea, Wanyama could make his second league start of the season, with his return adding steel and strength in midfield. Should the Kenyan indeed start, the Tottenham manager could play Harry Winks alongside him in the pivot to add dynamism.

Another player who will be hoping to return to the starting lineup on Thursday is Harry Kane, who came off the bench on Tuesday having overcome a bout of illness. Behind him, Christian Eriksen, Son Heung-Min and Dele Alli are likely to be the men providing pace, width and creativity.

While there is a concern of possibly overworking them, the trio should be rested for the FA Cup tie against AFC Wimbledon, with their performance being key for the crucial derby game. The back-line is only likely to see one rotation, with Serge Aurier coming in for Kieran Trippier.

While Pochettino has very little injury woes, the same is not the case with David Moyes, who has to deal with a plethora of fitness problems heading into Thursday’s game. Ahead of the visit to Wembley, the West Ham boss could be without as many as nine first-team players.

The absence of Cresswell is the major concern, as the unavailability of the Englishman could force Moyes to change his system on Thursday. Instead of a back-three, a traditional four-man back-line could be employed by the West Ham boss, with Declan Rice unlikely to start in such a big game.

Moyes would also look to get men behind the ball and deny Tottenham any half space that Eriksen and Alli strive to exploit. With that in mind, a three-man midfield could be deployed, featuring captain Mark Noble, Pedro Obiang and Cheikhou Kouyate.

Up front, Andy Carroll could start once again, despite his fitness always being iffy, after scoring a match-winning brace. Behind him, Marko Arnautovic and Manuel Lanzini will be the duo bringing pace, explosiveness and creativity to support the front-man. 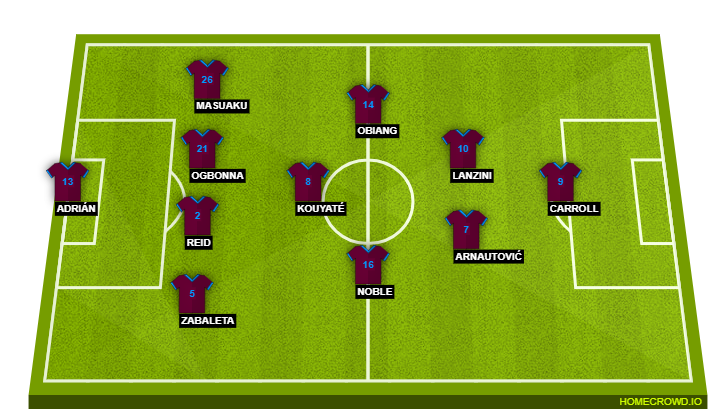 After a tough start to life as a West Ham player, Marko Arnautovic is finally starting to find his feet in East London. The arrival of David Moyes has been a catalyst for the upturn in form, with the Austrian forward scoring some important goals, including the winner against Chelsea last month.

Having discovered an element of consistency in his game in recent weeks, a game changing performance against Tottenham will further endear him with the West Ham fan base. Spurs have looked quite unconvincing at the back in the last two months, and the opportunity is certainly there to be taken.

The festive period is set to end with a banger of a game on Thursday and as is the case more often than not, the game should have goals in it, despite the potential element of fatigue in it. Tiredness should be more of a factor for West Ham though, with David Moyes not having the luxury of rotating much.

Mauricio Pochettino, on the other hand, can – and should – rotate, with a well rested Harry Kane set to be unleashed on the Hammers. The England hitman has scored two hat-tricks in each of his last two starts, and looked hungry off the bench on Tuesday as well.

With Kane in such form, it is hard to imagine anything but a Tottenham win, although it won’t be a surprise if West Ham manage to somehow grab a point. The Hard Tackle though, predicts a 3-1 win for Spurs.