The festive frenzy continues in the Premier League on Wednesday, with the marquee clash of Gameweek 22. Arsenal welcome Chelsea at the Emirates in the first of three meetings between the two sides in January, and both outfits would be hoping to do one better than the last time they met each other.

Arsenal have not lost a game since going down to Manchester United exactly a month ago. But, their form hasn’t inspired a lot of confidence, with just two wins from the subsequent six Premier League games. Three of the draws have come against sides in the bottom half of the table, meaning the Gunners have dropped a bit in the top four race.

Chelsea, on the other hand, have been relentless over the past four weeks, with four wins and a draw taking them further away from other top four contenders and into battle with Manchester United for the second spot. A win on Wednesday would see the Blues leapfrog the Red Devils back into second.

The reverse fixture ended in a keenly contested goalless stalemate that saw David Luiz being sent off. Ahead of the latest meeting between the two sides, The Hard Tackle takes a closer look at the encounter.

The injury list is growing for Arsene Wenger, who could be without as many as seven first-team players ahead of the visit of Chelsea. Laurent Koscielny and Sead Kolasinac are the latest players on the treatment table after the duo had to be taken off against West Brom over the weekend.

Wenger and his medical staff are pessimistic about their availability, while Mesut Ozil faces a late fitness test after missing the West Brom game. Nacho Monreal, Olivier Giroud, Aaron Ramsey and Santi Cazorla are the other players on the sidelines, with every player bar Cazorla set to return in the coming weeks.

The long list of absentees almost makes several players automatic selections, with the likes of Alexandre Lacazette, Alexis Sanchez, Jack Wilshere, Granit Xhaka, Shkodran Mustafi and Petr Cech certain starters. Ainsley Maitland-Niles should come into the side in place of Kolasinac, with a change in system a possibility.

If Wenger sticks to a back-three once again, Per Mertesacker is likely to come into the side, provided Koscielny isn’t fit to start. The remaining place, in attack, should be taken up by Alex Iwobi, despite not being impressive enough recently.

The onus, meanwhile, will be on Wilshere to take on the mantle of creating the chances for his side, and set up Lacazette, who hasn’t received good service lately. Mustafi should be the leader in defence to absorb the pressure of the Chelsea attack, while Chambers will be tasked with keeping Eden Hazard quiet.

Unlike Wenger, Conte does not have many players missing from his squad ahead of their short trip to the Emirates. David Luiz is the only major absentee due to a knee complaint, with Charly Musonda (foot) and Baba Rehman (knee) the other players on the sidelines.

The Brazilian though, is nearing his return to action, having stepped up his recovery in recent weeks, although sustained participation remains in doubt for two reasons. Firstly, his Chelsea future is uncertain, with reports linking him with an exit and Andreas Christensen growing into the sweeper role in the back-three.

Speaking of the Dane, he could be back in the starting lineup after missing the last two games due to illness. Gary Cahill has played at the heart of back-three in his absence, without being nearly as effective, and his return would provide a sense of control in defence.

In front of the back-three, Conte could go back to a five-man midfield to create an overload in the middle and wrest control of the game. N’Golo Kante could, thus, be joined by Tiemoue Bakayoko and Cesc Fabregas, who would be the creator-in-chief for Chelsea.

Upfront, Eden Hazard would be relishing a reinstatement as the free roaming attacker behind Alvaro Morata – a role that he has loved reprising this season. The Spaniard’s aerial abilities, meanwhile, could see the Arsenal defence being bombarded with many a long balls, from different angles. 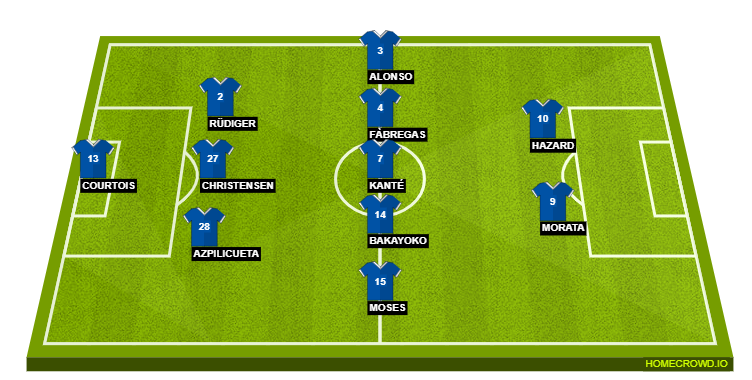 Which Sanchez will turn up on Wednesday? (Photo courtesy – Michael Steele/Getty Images)

He has clearly been far from his best this season, but an apparent lull hasn’t stopped Alexis Sanchez from being the most major contributor for Arsenal this season. The last few weeks have shown that a turnaround may be in the offing, with the Chilean scoring two in his last two games.

An uncertain January transfer window beckons, but if he remains an Arsenal player beyond this month, the Chilean would be a vital cog for Arsene Wenger. In the shorter term, he will be key for the hosts to keep their mini unbeaten run intact against Chelsea, especially if Mesut Ozil continues to be unavailable.

London derbies often throw up some of the most fascinating contests in the Premier League, and games involving Arsenal and Chelsea have been no less. On Wednesday, the two sides meet once again, with the stakes quite high for each side.

Arsenal can’t afford any more slip ups in their bid to get back into the top four, while Chelsea must win to keep pace with Manchester United. The game is, thus, tantalisingly set up, although, with the hosts missing several key figures, Chelsea hold a slight edge.

Alvaro Morata’s inconsistent performances don’t help though, and 3-5-2 might not be the ideal formation to strangle the Arsenal back-line, which is why The Hard Tackle predicts a 1-1 draw.