The Premier League season reaches its midway point this weekend, with Gameweek 19. At the heart of Lancashire, Burnley can make some huge strides once again when they welcome a stuttering Tottenham Hotspur side at Turf Moor on Saturday.

The hosts have been the surprise package in the English top flight this season, with the joint-best defensive record in the Premier League catapulting them to sixth on the Premier League table. With just one loss in their last five games, the Clarets come into the game playing some of their best ever football in the division.

Tottenham, on the other hand, have seen their campaign peter out horribly, having already lost more games so far than they did in the entirety of last season. With just two wins in their last seven Premier League games, Mauricio Pochettino & co. are languishing at seventh on the table.

The reverse fixture, back in August, was one of the many games this season when Tottenham have been left frustrated as a late Chris Wood goal saw Burnley hold them to a 1-1 draw. Ahead of their latest meeting on Saturday, The Hard Tackle takes a closer look at the encounter.

The results on the field have been fantastic, and ever so often these have come despite some key absences. On Saturday too, Sean Dyche will be without a few important players, with as many as five likely to be unavailable for the visit of Tottenham.

The major absentee is James Tarkowski, an ever present at the back this season, who will miss the next three matches due to suspension, and maybe a few more beyond the designated period, after undergoing surgery on his hand. In the Englishman’s absence, Ben Mee should have Kevin Long as his partner at the heart of defence.

Robbie Brady, Jon Walters (both knee) and Tom Heaton (shoulder) are three other players who are certain to miss Saturday’s game. The Burnley boss is also sweating over the fitness of Stephen Ward, who is recovering from a knee injury and is rated as doubtful.

Meanwhile, Dyche should again set his side up to defend with numbers to kill the half spaces and frustrate a Tottenham side that has thrived down the middle. Jack Cork will be a key man in midfield to hold fort in front of the back-four. 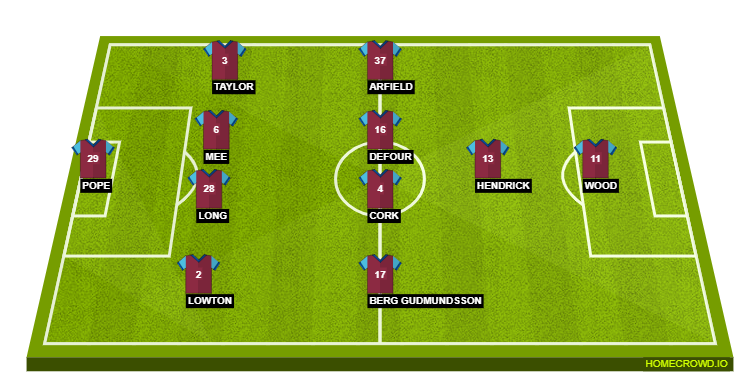 In stark contrast to Sean Dyche, Mauricio Pochettino has not really had a glut lot of roster issues bothering him in recent weeks, although the results have hardly been ideal. Ahead of the trip to Turf Moor, the Tottenham boss will be without just two first-team players.

Toby Alderweireld (hamstring) and Victor Wanyama are the only players on the treatment table, as they recover from their respective long-term injuries. But, the duo have stepped up their respective recoveries and could come back into contention in the coming weeks.

Meanwhile, Davinson Sanchez is set to return to the starting lineup after serving his three-match ban. The Colombian’s return might just see Pochettino revert to a back-three, with Eric Dier struggling in a traditional back-four.

Alternatively, Dier could also slot in midfield alongside Harry Winks, with Son Heung-Min in a brilliant run of form and unlikely to be dropped. The performance of a certain Harry Kane will be key though, with the English striker’s hot and cold showings a major reason for the poor run of results.

With his partner in crime James Tarkowski set to miss at least the next three games, a returning Ben Mee has the bulk of the responsibility. The Englishman will not just don the armband, but will also need to organise his side’s back-line while quickly settling alongside Kevin Long, if the hosts are to deny Tottenham again.

What a story Burnley have been this season. One of the most defensively sound teams in the Premier League, their ability to solidify things at the back first and then build up from there has seen them scale unprecedented heights so far.

On Saturday, it should be the same once again as a stuttering Tottenham side pay them a visit. The respective forms of each side also provides cause for optimism to the hosts as well, with very little troubling Burnley at Turf Moor, while Tottenham have failed to notch up three points in their last five away games.

The form of Harry Kane and Dele Alli is quite concerning for Mauricio Pochettino too, and keeping all that in mind, Sean Dyche & co. should have another night of frustration to provide the big boys of the league – a 1-1 draw.