The frenzied Premier League action will continue on Wednesday as Gameweek 17 comes to an end. In London, Tottenham will be aiming to resume their charge towards a place back in Top 4 when they play hosts to a struggling Brighton side at Wembley.

Tottenham overturned their four-game winless run over the weekend as they cruised to an emphatic 5-1 win over Stoke City at Wembley on Saturday. The North Londoners are still out of Top 4, although the gap is now down to two points with Liverpool only managing a stalemate in the Merseyside derby.

Brighton, on the other hand, are going through a horrible run of form, having failed to win each of their last five games, including a six-pointer against Huddersfield over the weekend. The poor run of results has now left them out of the top half of the table, just four point out of the relegation zone.

The two sides are meeting for the very first time in the Premier League and ahead of the match on Tuesday, The Hard Tackle takes a closer look at the encounter.

Mauricio Pochettino does not have any fresh roster issues to contend with ahead of the visit of Brighton. The Tottenham boss, therefore, continues to remain without three first-team players for Wednesday’s game due to injuries and suspension.

Toby Alderweireld (hamstring) and Victor Wanyama (knee) are long-term absentees, with the duo only expected to be available post the turn of the year. Davinson Sanchez is the third player out, as he serves the second of his three-match ban.

So, Pochettino has the same squad to choose from, although a few changes may be in the offing. The full-backs, in particular, are likely to be rotated, although there is little scope for the central defenders and central midfielders to be rested.

The quartet of Harry Kane, Dele Alli, Christian Eriksen and Son Heung-Min are expected to continue as well, despite Erik Lamela providing an additional option, with results of paramount importance currently.

Former Tottenham man Chris Hughton returns to the club where he spent several fruitful years, making nearly 400 appearances. This time though, he’ll be a part of the visiting side, leading Brighton as their manager and looking to spring a surprise on the North Londoners.

As far as team news is concerned, there is very little troubling the Brighton boss, with Steve Sidwell the only absentee. The veteran midfielder is yet to feature this season as he continues recovering from a long-term back injury.

Meanwhile, Anthony Knockaert is in contention to return to the starting lineup after being omitted from the matchday squad last weekend. But, Izzy Brown could continue after impressing in the chances that he has received in recent weeks. 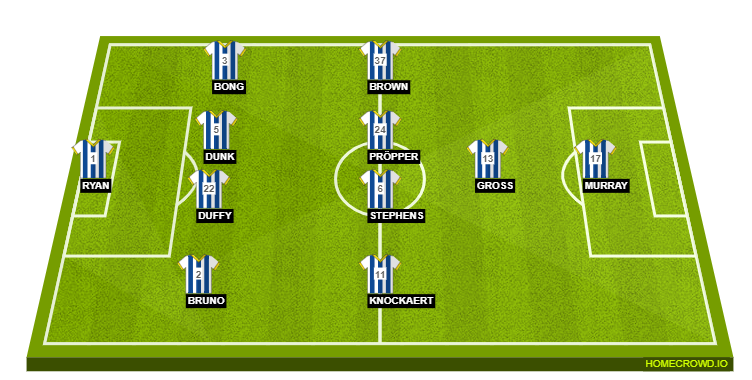 After a fantastic start to his maiden Premier League campaign, things have suddenly gone pear-shaped for Gross, much like the rest of the Brighton side. The German attacker has failed to make a direct contribution to a goal in each of the last four games, with his side scoring just once in the period.

With the Seagulls in search of a shock win to overturn their slump in form, their talisman needs to raise his hand and step up in order to set his side back on the rise. He will also need support from the rest of his teammates though, with Chris Hughton’s men failing to measure up in the final third of late.

After a run of poor results, Tottenham seem to back in the ascendancy, following a crushing win over Stoke City over the weekend. Midweek rest in the Champions League last week seems to have done Harry Kane and Christian Eriksen a world of good, with the duo firing on all cylinders on Saturday.

Brighton, on the other hand, are going through a miserable run of form, having scored just one goal in their last four games. So ideally, just one result looks likely, on paper and otherwise, and the hosts should coast to a comfortable 3-0 win on the night.