The curtains are set to fall on the UEFA Champions League Group Stage on Wednesday, with Matchday 6. At Anfield, Liverpool will be aiming to finally clinch their place in the Round of 16 while sealing top spot in Group E at the same time, when they play hosts to Spartak Moscow at Anfield.

The two sides are currently separated by just three points in a wide open Group E. While the hosts sit top of the table with nine points, Spartak are in third place with six points. The Reds do look like the favourites to progress to the knockout stages, but a shock loss could spell trouble for their Champions League aspirations.

The reverse fixture at the Otkytiye Arena, on Matchday 2, ended in a 1-1 draw as a resolute Spartak side held off a relentless Liverpool attack. Ahead of their latest meeting on Wednesday, The Hard Tackle takes a closer look at the encounter.

Jurgen Klopp has a few injury concerns to deal with ahead of the visit of Spartak Moscow. The Liverpool boss could, in fact, be without as many as seven first-team players for Wednesday’s tie due to various short-to-long term injuries.

The latest player on the treatment table is Marko Grujic, who is recovering from a hand injury. The Serb has joined Nathaniel Clyne (back), Adam Bogdan (ACL) and Danny Ward (back) on the sidelines, while there are doubts over the availability of Adam Lallana (match fitness) and Joe Gomez (illness).

But, the worst piece of news surrounds the continues absence of Joel Matip, who is on the treatment table due to a muscle injury. The Cameroonian’s situation leaves Klopp down to his bare bones at the heart of defence, with just Dejan Lovren and Ragnar Klavan the fit centre-backs.

Meanwhile, Loris Karius should resume his exclusive Champions League place between the sticks on Wednesday. Sadio Mane and Alex Oxlade-Chamberlain are also likely to return to the starting lineup as Jurgen Klopp continues to rotate his squad in a busy December.

Like Klopp, Massimo Carrera, too, has several fitness problems hampering his preparations for the crunch Champions League tie. Ahead of the visit to Liverpool on Wednesday, the Spartak Moscow boss is set to be without four key first-team players.

There are major problems in midfield, with Artem Timofeev (knee), Dmitri Kombarov (rib) and Jano Ananidze (ankle) on the treatment table due to their respective short-to-long-term injuries. Georgi Tigiev is absent too, with the left-back recovering from ruptured cruciate ligament.

Meanwhile, the onus will be on Spartak’s in-form Dutchman Quincy Promes to provide the attacking threat from the left flank, while the dead-ball abilities of Fernando are all to well known for the Liverpool fans. Artem Rebrov is likely to be a busy man in goal, just like the reverse fixture, back in September. 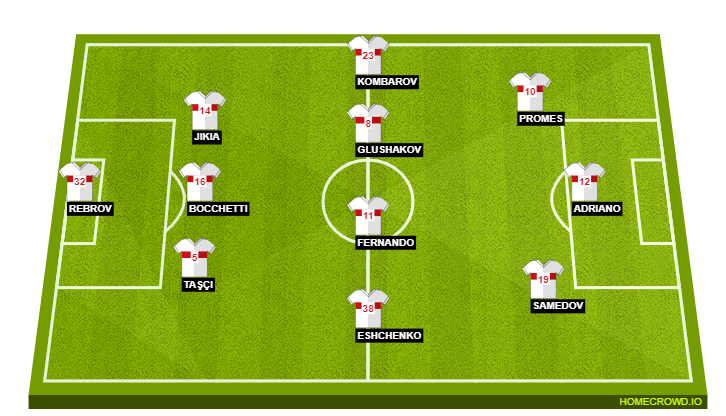 A calm head at the back? (Photo courtesy – Aitor Alcalde/Getty Images)

Liverpool have been flying after receiving a 4-1 thrashing at the hands of Tottenham in October. While much of the recent success has been built on the back of their undoubted attacking prowess, the Reds’ defence has stepped up as well, bar a few failures, in recent weeks.

At the heart of defence, a certain Dejan Lovren has boasted a much improved look of late, and with the likelihood of either Emre Can or Georginio Wijnaldum again, the task of organising the back four will fall on his shoulders. Only time will tell if he can continue this run of form but for now, his importance can’t be stressed enough.

Things have gone right down the wire in Group E, with none of the qualifiers confirmed yet for the Round of 16. Liverpool find themselves in the driver’s seat as far as qualification permutations are concerned, and are the favourites to proceed, with the final game being played at home.

Spartak Moscow are no pushovers though, as they have shown so effectively so far in the Group Stage. When up against it, Massimo Carrera’s men can absorb the pressure, but on the night, the Reds’ attacking form could be too good to contain.

The Hard Tackle predicts a hard-fought 2-1 win for Jurgen Klopp & co. to proceed to the Round of 16 as winners of Group E.