La Liga moves into Matchweek 14 this weekend as the season gets closer to its midway point. At Barcelona, the league leaders could make it a full calendar year without dropping a single point at home in the Spanish top flight when they welcome Celta Vigo to Camp Nou on Saturday.

The Blaugrana have been in fine form for the most part this season, and are yet to taste defeat since the onset of the campaign. Ernesto Valverde’s men comfortably sit atop La Liga, with a four-point lead over second placed Valencia, who held them to a 1-1 draw at Mestalla last weekend.

Celta Vigo, on the other hand, have struggled to string together a run of positive results this season, even though they sit ninth in the league table. Juan Carlos Unzue’s men will be looking to notch up back-to-back league wins for the first time this season on Saturday, although their task wouldn’t be any easy against the formidable hosts.

The corresponding fixture last season ended in a thumping 5-0 win for Barcelona, with Lionel Messi inspiring the rampaging one-sided result. Ahead of the latest meeting between the two sides, The Hard Tackle takes a closer look at the encounter.

Ernesto Valverde does not have any fresh injury concerns ahead of the visit of Celta Vigo on Saturday. In fact, the Barcelona manager’s injury woes have eased up considerably in the last few weeks, with just three players remaining on the treatment table.

Roberto is unlikely to start after only coming off the bench in the Copa Del Rey tie against Real Murcia on Wednesday, although his return gives Valverde another option for the right-back slot, with Nelson Semedo blowing hot and cold. Pique should start alongside Samuel Umtiti at the heart of defence.

Meanwhile, the Barcelona boss is likely to restore his strongest starting eleven on Saturday after playing a largely second string side in the cup tie. The likes of Marc-Andre ter Stegen, Umtiti, Jordi Alba, Andres Iniesta, Lionel Messi and Luis Suarez should definitely return after being rested for the game.

While Valverde still has a few players missing through injury, Juan Carlos Unzue has a clean bill of health ahead of his return to Barcelona on Saturday. The last player off the treatment table is centre-back Sergi Gomez, who has completed his recovery from a calf injury.

But, the match has come too soon for the Spaniard, who is likely to remain on the sidelines for one more week. In his place, Andreu Fontas is expected to come into the starting lineup to partner Gustavo Cabral at the heart of defence.

The only other player missing for Unzue is Jonny, who is serving a one-match suspension after picking up his fifth yellow card of the domestic campaign last weekend.

Meanwhile, the onus will be on top scorer Iago Aspas and Maxi Gomez to have their scoring boots on in order to earn the visitors a shock win on Saturday, with the defence likely to have a hard time against the Barcelona attack, even if Messi’s month-long drought continues. 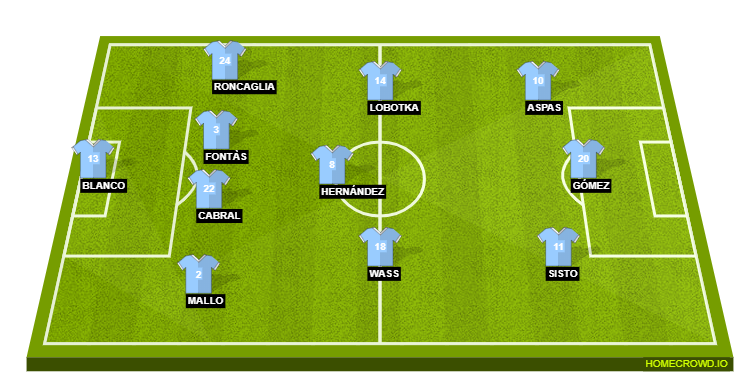 After a fine start to the season, things have slowed down slightly in recent weeks, with three draws in November in all competitions. That is thanks, in large part, to Lionel Messi’s month-long drought, with his last goal coming against Athletic Bilbao, in October.

With the Argentine wizard not managing to find the back of the net, the goalscoring burden has fallen on the shoulders of Luis Suarez, for the most part. But, his own slump in form hasn’t helped matters much, with goals certainly coming at a premium of late.

The same can’t continue for the foreseeable future though, especially with Real Madrid’s form seemingly on a gradual rise. With Paco Alcacer showing an upsurge in form, El Pistolero is looking over his shoulder as well, and a fine performance against Celta Vigo should put quite a few concerns to rest for a while.

After a few sub-par performances in November, Barcelona have started the last month of 2017 on a high with a thumping win over Real Murcia in Copa Del Rey. With Ernesto Valverde having all of his first-choice players at his disposal in time for Celta Vigo’s visit, a return to top form is on the cards.

The visitors have a shambolic recent record at Camp Nou, having conceded 11 goals on their last two visits, and Juan Carlos Unzue’s men should continue their trend of victory being followed by a winless result in La Liga this season.

This could also be a game in which Lionel Messi ends what has now become quite a long drought, with Barcelona likely to enjoy a comfortable win. The Hard Tackle predicts a straightforward 3-0 win for Valverde & co.