The Premier League moves into Gameweek 15 this weekend as the frenzied festive period continues. At the south coast of England, Liverpool will be aiming to continue their fine unbeaten run when they visit the Amex Stadium to take on Brighton & Hove Albion on Saturday.

The Seagulls have taken to life in the Premier League well, steering well clear of the relegation zone and into the top half of the table. But, sides from the bottom ten are closing in on Chris Hughton’s men, who have failed to win any of their last three games.

Liverpool, on the other hand, have picked up form since their 4-1 loss to Tottenham last month and have, in fact, gone on to leapfrog the North Londoners in the Premier League table. Jurgen Klopp’s men are coming off a comfortable 3-1 win over Stoke City on Wednesday to climb up to 5th.

The two sides last met in top flight action in 1983, with Brighton managing to Liverpool to a 2-2 draw at the erstwhile Goldstone Ground. Ahead of their first Premier League meeting on Saturday, The Hard Tackle takes a closer look at the encounter.

Chris Hughton does not have a pressing injury concern to contend with ahead of the visit of Liverpool, with Steve Sidwell the only player missing due to a long-term back injury. The Brighton boss, in fact, has some good news coming his way this week, with Gaetan Bong looking likely to return from a minor knee injury.

The onus on Saturday will again be on the central defensive partnership of Shane Duffy and Lewis Dunk, who have frustrated the best of attacking units this season, to continue their unbeaten run at home, with the Seagulls not losing a single game at the Amex Stadium since the opening gameweek.

In midfield, Dale Stephens and Davy Propper are likely to be tasked with the responsibility of keeping Philippe Coutinho quiet. Up front, Hughton will look towards Anthony Knockaert and Jose Izquierdo to provide the width and stretch a vulnerable Liverpool defence, while Pascal Gross will be the creative workhorse for the hosts. 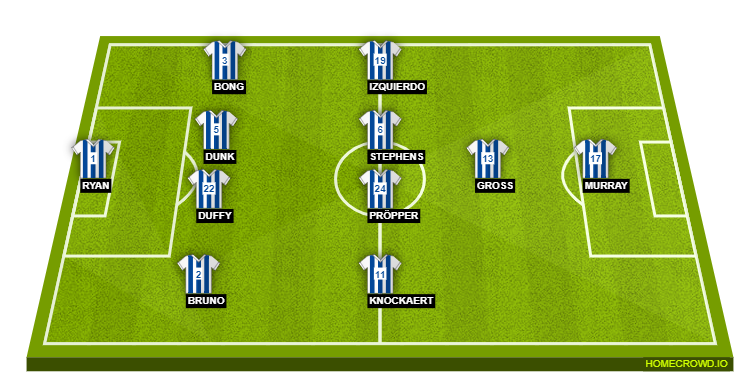 Unlike his counterpart, Jurgen Klopp has a few issues to deal with before making the trip to the south coast. The Liverpool boss could, in fact, be without as many as five key first-team players on Saturday due to various problems.

Defence, and in particular the heart of defence, is a major area of concern for Klopp, with Joel Matip set to miss the game due to a muscle injury that he picked up at Stoke on Wednesday. Ragnar Klavan is a doubt for the trip to Brighton as well due to the illness that forced him to miss the game against Stoke.

Should Klavan be unable to recover from his issues, Joe Gomez could be asked to fill in at the heart of defence alongside Dejan Lovren, with Trent Alexander-Arnold returning to the starting lineup in the right-back slot.

The other absentees are Nathaniel Clyne (back), Adam Bogdan (ACL) and Danny Ward (back), who are all recovering from their respective long-term injuries. Meanwhile, Philippe Coutinho and Mohamed Salah are expected to return to the lineup on Saturday after starting on the bench against the Potters.

After a slow start to his Premier League bow, Knockaert seems to be retracing the kind of form that saw him being named the Championship Player of the Year last season. The game against Manchester United was perhaps the biggest indication of the same, with the Frenchman the only Brighton player who gave the Red Devils any jitters.

Against Liverpool, with Alberto Moreno looking extremely vulnerable in recent weeks, his pacy outlet out wide could reap dividends. With Pascal Gross looking dangerous as well, Knockaert’s upsurge in form could just be what Brighton need on Saturday afternoon.

Brighton haven’t taken long to accustomed to the challenges in the Premier League, and look the part to continue in the English top flight bar a spectacular slump in form. But, against the Big Six sides, the Seagulls have shown that there is still some work need to be done to spring a surprise or two this season.

Liverpool, on the other hand, have looked quite imperious in the last one month, with Mohamed Salah arguably the most in-form player in the league. On Saturday, the Egyptian is likely to be a factor once again, and it could be a long night for Chris Hughton’s men. The Hard Tackle predicts a comfortable 3-1 win for Jurgen Klopp & co.