The La Liga title race is set to take another interesting turn on Sunday, with this weekend’s marquee clash. The top two sides in the Spanish top flight will face off when Valencia play hosts to Barcelona at the Mestalla in what will be the toughest test of their title credentials so far for either outfit.

Valencia have, by far, been the surprise package in La Liga this season, having not lost a single game after the first twelve rounds of matches. Their superb unbeaten run has put them second in the league table, four points behind their visitors on Sunday.

Barcelona, on the other hand, have been flying high so far this season, having dropped points just once in twelve games. Ernesto Valverde’s men come into the game on the back of a 0-0 draw at Juventus that also confirmed top spot in their Champions League group.

The corresponding fixture last season was a keenly contested affair, with Barcelona edging out a 3-2 win after Lionel Messi struck the winner in injury time. Ahead of the latest meeting between the two sides on Sunday, The Hard Tackle takes a closer look at the encounter.

Los Che made history last weekend when they beat Espanyol 2-0 as they notched up a club record eighth successive win to maintain pace with Barcelona. While things on field have gone swimmingly, off field too there have been very few issues bothering Marcelino, as far as injuries are concerned.

The Valencia boss has just three first-team players on the treatment table, with defence a minor area of concern as a result. Javier Jimenez (knee) and Jeison Murillo (groin) are sidelined with their respective injuries. Nemanja Maksimovic is the third player unavailable, due to a back injury.

Robert Ibanez is back in training after recovering from a long-term knee injury, but Sunday’s game will come too soon for him. Meanwhile, Marcelino is expected to make a few changes for Barcelona’s visit, with the likes of Simone Zaza, Carlos Soler and Goncalo Guedes expected to return to the starting lineup.

While the aforementioned players would be expected to take the game to Barcelona and trouble what looks like a vulnerable back-four, the onus will also be on Ezequiel Garay and Gabriel to keep things tight at the heart of defence, while former Barcelona defender Martin Montoya will aim to get one up on his boyhood club. 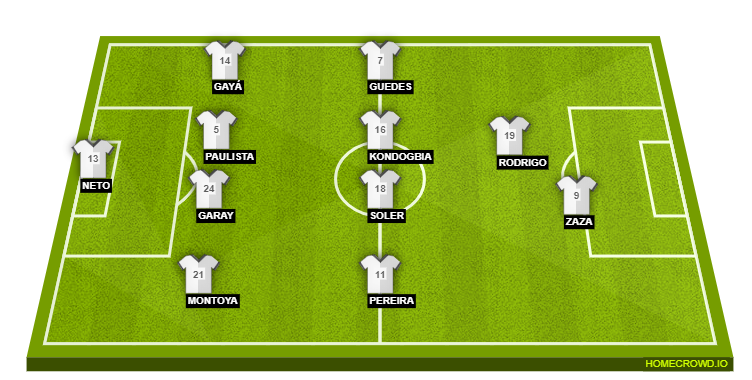 While his counterpart does not have a lot of roster issues to deal with, Ernesto Valverde has a number of problems on hands ahead of the trip to Mestalla. The Barcelona boss is likely to be without seven first-team players due to suspension and injury concerns on Sunday.

Defence is a major area of concern, with Gerard Pique suspended for the match after picking up his fifth yellow card in the league last week. With Javier Mascherano sidelined due to a hamstring injury, Valverde is down to his bare bones at the heart of defence.

Thomas Vermaelen is, thus, set to receive a rare start, and should line up alongside Samuel Umtiti on the night. The other absentees for the Barcelona boss are Rafinha (knee), Ousmane Dembele (hamstring), Andre Gomes (thigh) and Sergi Roberto (hamstring), with each player likely to return at some point next month.

Arda Turan is the final player unavailable, having only recently resumed training after an ankle injury. Lionel Messi is expected to return to the starting lineup after starting on the bench on Wednesday, while Paco Alcacer should start as well against his former side.

How dreams can quickly turn into nightmares. After joining Barcelona in the summer of 2014 from Arsenal, Thomas Vermaelen had the world at his feet. But, the last three years have been nothing short of tumultuous for the Belgian defender, who has struggled to remain fit for long periods.

As a result, he has barely featured for the La Liga heavyweights, managing a mere 22 appearances. On Sunday though, he is expected to start only his second game this season, and a solid outing could go a long way in ensuring a future at Camp Nou, with reports claiming that a January exit is on the cards.

The title race could take an interesting shape on Sunday, when Valencia and Barcelona meet at Mestalla. Los Che have been surprisingly flying high and are hoping to challenge for the title for the first time in years this season, and a positive result against the league leaders could prove just that.

Barcelona have not been at their fluent best for a while now, and their are defensive vulnerabilities waiting to be exploited. With the likes of Simone Zaza, Rodrigo and Goncalo Guedes in stunning form, Samuel Umtiti should have his hands full.

On the other end, Lionel Messi will need Luis Suarez and Paco Alcacer to support him well, with the former, in particular, blowing hot and cold this season. Another keenly contested affair is in the offing, and The Hard Tackle predicts a 2-2 draw on Sunday.