Arsenal will look to guarantee top spot in the UEFA Europa League Group H when they visit the RheinEnergieStadion to face 1. FC Koln on Thursday.

The UEFA Europa League returns on Thursday with Matchday 5 of the Group Stage. In Group H, Arsenal will look to confirm safe passage into the Round of 32 while also clinching top spot when they take on 1. FC Koln at the RheinEnergieStadion.

The Gunners are the runaway leaders in Group H, with ten points after the first four matchdays, and need just one more win to confirm top spot. Koln on the other hand, are fighting to finish as the runners up, with only two points separating them and second-placed Red Star Belgrade.

As far as recent results are concerned, the hosts are going through a miserable run of form as they remain rooted to the bottom of the Bundesliga table, still winless after the first 12 games while Arsenal come into this game on the back of a confidence boosting 2-0 win over rivals Tottenham last weekend.

The reverse fixture ended in a 3-1 win for Arsenal, as they overturned a one-goal half-time deficit to earn three points on Matchday 1. Ahead of the latest meeting between the two sides, The Hard Tackle takes a closer look at the encounter.

Peter Stoger has an injury crisis on his hands ahead of the visit of Arsenal, with as many as nine first-team players sidelined for Thursday’s tie. The problems run all across the park, with defenders Jonas Hector (ankle) and Dominique Heintz (thigh) sidelined with their respective long-term injuries.

In midfield, Marius Laux (unspecified), Nikolas Nartey (meniscus), Marco Hoger (thigh), Marcel Risse (knee) and Christian Clemens (groin) are on the treatment table due to various short-to-long injuries. Up front, Simon Zoller is recovering from a thigh injury, and will only be available after the turn of the year.

The key man for the hosts will be Timo Horn, a goalkeeper who has already faced a barrage of shots this season and will expect more of the same on Thursday. The 24-year-old has been one of the few players who have acquitted themselves well this season, and he will need to be at his best to deny Arsenal a win.

Up front, Jhon Cordoba will be aiming to get on the score sheet once again against Arsenal, having given his side a shock lead in the reverse fixture back in September. 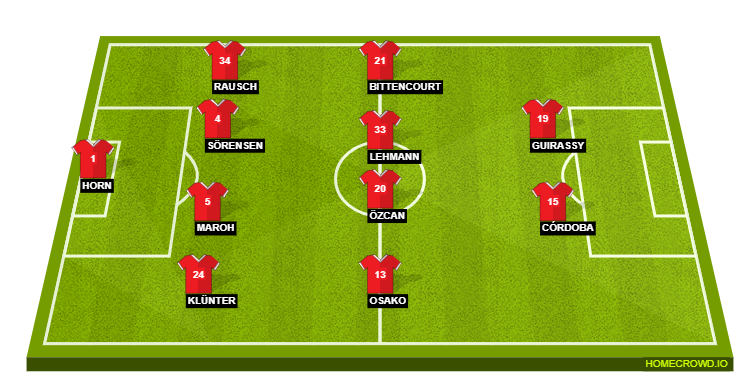 Arsene Wenger’s injury problems have eased up considerably in the last few weeks, with just Santi Cazorla on the treatment table due to a long-term Achilles injury. Theo Walcott has also missed the trip to Cologne after not taking part in training on Wednesday through illness.

When it comes to the players who are a part of the traveling squad, there is some good news, with Danny Welbeck (groin), Olivier Giroud (thigh) and David Ospina (groin) fit and likely to be involved on Thursday.

As far as team selection is concerned, as has been the case in Europe this season, wholesale changes can be expected from Wenger, with the likes of Jack Wilshere, Per Mertesacker, Reiss Nelson, Ainsley Maitland-Niles likely to return to the starting lineup.

Wilshere, in particular, will be aiming to impress once again in order to claim a starting berth in the Premier League, having only made two appearances from the bench so far this season.

After an impressive start to the season, two injury-riddled spells on the sidelines have killed off all the momentum that Welbeck created till September. At one stage, it even looked like the Englishman would be able to compete with Mesut Ozil, Alexis Sanchez and Alexandre Lacazette for a regular starting spot.

But, with the trio rediscovering their form, Welbeck needs to start from scratch to come back into contention in the Premier League. The Europa League game on game on Thursday might be a good place to start for the player, and a good outing could go a long way for him, especially with the game against former side Manchester United looming.

The Europa League has pretty much been plain sailing for Arsene Wenger and Arsenal so far, having not been troubled much in any of their previous four Group Stage games. The match on Thursday provides some of the fringe players another opportunity to flex their muscle against a struggling Koln side.

The German outfit has only marginally improved in Europe so far, and are carrying little momentum into the tie. With the likes of Olivier Giroud and Jack Wilshere proving to be too strong for the competition so far, it should be a straightforward win for the visitors. We predict a 3-1 win for Arsenal.