Liverpool will aim to continue their pre-international break winning momentum when they welcome Southampton to Anfield on Saturday.

A high-octane encounter awaits at Anfield on Saturday, when two sides that infamously met each other in the summer transfer window clash on the field. Liverpool play hosts to Southampton, looking to build on their recent upturn in form, after two tough months of inconsistent results.

The Reds have turned things recently, winning each of their last three games by a three-goal margin to climb up to fifth place in the Premier League table. Their most recent match saw Jurgen Klopp’s men make light work of West Ham United at the London Stadium, comfortably beating the hapless hosts 4-1.

Southampton, on the other hand, have failed create any sort of momentum under new manager Mauricio Pellegrino, and are in desperate need of some inspiration as they languish in 13th place. The Saints come into this match on the back of a disappointing 1-0 loss to Burnley at home.

The corresponding fixture last season ended in a goalless stalemate as a resolute Southampton defence stood tall to the threat of the Liverpool attack. Ahead of the latest meeting between the two sides on Saturday, The Hard Tackle takes a closer look at the encounter.

Jurgen Klopp’s injury troubles have eased up considerably despite the dreaded international break, with just one key first-team player absent through injury. Nathaniel Clyne has undergone back surgery, and will not return until 2018.

In the senior Englishman’s absence, Joe Gomez and Trent Alexander-Arnold will continue to deputise at right-back, with the former expected to continue getting the nod in league games. Backup goalkeepers Danny Ward (back) and Adam Bogdan (ACL) are the other certain absentees.

The good news for the Liverpool boss is that the likes of Sadio Mane, Jordan Henderson and Adam Lallana are in contention to feature on Saturday. Mane has completely recovered after returning from international duty early, with what was feared to be a recurrence of his hamstring injury, and is likely to start.

Meanwhile, Henderson has returned to full training after pulling out of England duty due to a thigh injury, while Lallana could be introduced from the bench, having completed his recovery from his own long-term thigh injury.

Also expected to start, after missing the last three games, is Philippe Coutinho after he featured for Brazil against England. A four-pronged attack featuring Coutinho, Mane, Roberto Firmino and Mohamed Salah bodes well for Klopp, who would now be aiming to mount a serious challenge for the title.

Mauricio Pellegrino does not have a lot of pressing injury concerns ahead of the game on Saturday, with just two key first-team players missing the trip to Liverpool – summer signings Mario Lemina (ankle) and Wesley Hoedt (knock).

Lemina is back in training after missing the match against Burnley due to an ankle injury, but this weekend’s game has come too soon for him. Hoedt, on the other hand, has not completed his recovery from the minor knee injury that forced him to pull out of the Netherlands squad.

In Hoedt’s absence, Pellegrino is likely to deploy Maya Yoshida alongside Virgil van Dijk at the heart of the Southampton defence. The Dutchman, in particular, will be the man under the spotlight after his long drawn out transfer saga involving Liverpool in the summer.

Meanwhile, the likes of Dusan Tadic, Nathan Redmond, Steven Davis and Manolo Gabbiadini will have to rediscover their best form if Southampton are to continue their fine run of results against the Reds. 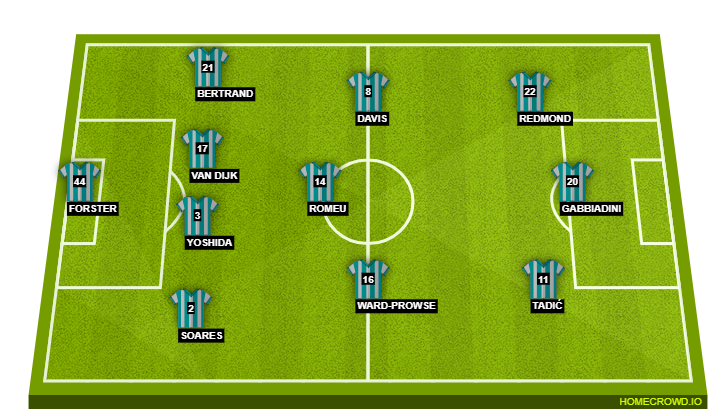 Thumbs up for a return to goalscoring ways? (Photo courtesy – Julian Finney/Getty Images)

After a rampaging start to his stint in England with Southampton back in January, things have gone pear-shaped for Manolo Gabbiadini. While the Italian striker has still been the leading goalscorer for Southampton over the last ten months, he hasn’t been consistent in front of goal.

It has been more of the same so far this season as well, with Gabbiadini only managing to find the back of the net three times in 11 games. However, if Southampton are to continue their unbeaten run against the Reds, the form of the 25-year-old will be crucial, and he will need to have his scoring boots on on Saturday.

Liverpool and Southampton renew their rivalry on the field on Saturday, when a win is paramount for the confidence of either outfit. Both sides have arguably made a disappointing start to the season than they would have envisioned at its onset.

Having said that, Mauricio Pellegrino’s men have failed to get going at all this season, and will look to sit back on Saturday in order to have the slightest chance of grabbing a point or three. But, the Saints defence is unlikely to measure up to the formidable Liverpool attacking quartet, which is why we predict a 2-0 win for Jurgen Klopp & co.