League football will take a break after this weekend for the fortnight-long international break, the last one this year. Liverpool will look to enter the latest break for international fixtures with positive momentum, when they travel to the London Stadium to face West Ham United on Saturday.

West Ham have not been in good form in the first quarter of the Premier League campaign, failing to stitch together a run of positive results, which has left them 16th, a point outside the relegation zone. Their most recent results was a 2-2 draw at Crystal Palace, when they let slip a two-goal lead to drop two precious points.

Liverpool, too, have been going through a poor run of form over the last two months, having only managed to win two of their last seven Premier League games. This has left them a massive twelve points adrift of league leaders Manchester City, although they did well to beat Huddersfield 3-0 last week.

The corresponding fixture last season ended in a commanding 4-0 win for Liverpool as Philippe Coutinho & co. ran riot. Ahead of the latest meeting between the two sides, The Hard Tackle takes a closer look at the encounter.

After a month full of speculations surrounding his job, speculation continues to mount around Slaven Bilic’s future at West Ham. The comeback win over Tottenham in the Carabao Cup would have brought some relief, but the Croat continues to feel the heat following a disappointing draw at Crystal Palace.

His bid to return to winning ways is not being helped by an injury crisis, with four key first-team players sidelined due to various fitness problems. On top of that, with Pablo Zabaleta suspended for Saturday’s game, Bilic has a major selection headache in defence.

That is because with Sam Byram on the treatment due to a thigh injury, the West Ham boss is without a recognised right-back. Furthermore, Jose Fonte (foot) and James Collins’ (ankle) injuries have left Bilic with just two fit centre-backs. Michail Antonio’s absence through a rib injury doesn’t help either.

But, Winston Reid (calf) and Aaron Cresswell (leg) have recovered from their respective injuries to give their manager some respite. However, in the absence of Fonte and Collins, Bilic is expected to deploy Cheikhou Kouyate as a makeshift centre-back in a back-three.

The absence of Byram and Zabaleta might force the West Ham boss to field Marko Arnautovic in an unfamiliar right wing-back slot. Andy Carroll might have to suffice with a place on the bench against his former club, with Andre Ayew and Javier Hernandez showing some goalscoring form. 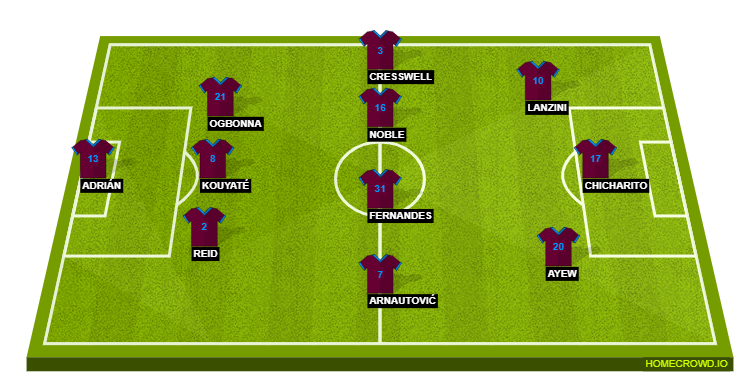 Like his counterpart, Jurgen Klopp has to deal with a number of injury concerns as well, with as many as seven first-team players likely to miss the trip to East London to take on West Ham on Saturday.

The major absentee for the Reds is Philippe Coutinho as he continues to struggle with a thigh injury, and will only be available till after the international break. Georginio Wijnaldum is a major doubt due to an ankle injury he picked up in the midweek fixture against Maribor.

Dejan Lovren is doubtful as well due to a thigh injury, and the Croat will have to undergo a late fitness test to determine his availability. In case he is unable to recover in time, Ragnar Klavan is likely to continue at the heart of defence alongside Joel Matip.

Danny Ward (back), Adam Bogdan (ACL), Adam Lallana (thigh) and Nathaniel Clyne (back) are all long-term absentees. However, Sadio Mane returned to training earlier this week, with Jurgen Klopp providing positive news on his recovery, claiming that the Senegalese winger might just be able to make a cameo appearance.

Meanwhile, the injury woes for the Reds could prove to be good news for Alex Oxlade-Chamberlain, who is closer than ever to make his first Premier League start on Saturday. The front trio, though, selects itself, with Roberto Firmino, Daniel Sturridge and Mohamed Salah expected to start.

Jurgen Klopp has somewhat of an injury crisis on his hands, with his attacking unit, in particular, not in a great shape. The absence of Philippe Coutinho and Sadio Mane has been a big blow for the Liverpool boss, but his players have stepped up in the last two games.

In particular, the form of Daniel Sturridge has provided some cause for optimism, with the Englishman finding the back of the net in each of his last two outings. With his Liverpool future up in the air, he needs to continue his scoring run to not only save his career with the Reds but also guide his side to another win.

September and October were two horrible months for Liverpool, with more losses and draws than wins to show for their efforts. But, the last two games are bringing back some optimism, with Jurgen Klopp’s men clawing their way back into some form.

West Ham, on the other hand, have not been able to move on from the miseries of last season, as they find themselves in the lower reaches of the Premier League once again. Although the Hammers have won their only two games at home, the last result saw them surrender meekly to Brighton.

Furthermore, the form of Mohamed Salah will be a major worry for the hosts, with the Egyptian going from strength to strength. Therefore, The Hard Tackle predicts a 3-1 win for the Reds, although it should be a closer contest than what the scoreline suggests.