The UEFA Champions League is back with Matchday 4 of the Group Stage. In Group A, Manchester United will be bidding to clinch qualification to the Round of 16 for the first time since the 2013-14 season, when they play hosts to Benfica at Old Trafford on Tuesday.

The hosts currently sit atop Group A, with a perfect record after the first three Matchdays, having also not conceded a single goal thus far. Jose Mourinho’s men come into this match on the back of a hard-fought 1-0 win over Tottenham Hotspur in the Premier League on Saturday.

Benfica, on the other hand, are at the other end of the spectrum, rock bottom in the group and yet to win a single point so far. Rui Vitoria’s men, too, had to fight hard on the weekend to earn all three points in Primeira Liga, beating Feirense 1-0 at Estadio da Luz on Friday.

The reverse fixture, in Matchday 3 two weeks ago, ended in a 1-0 win for Manchester United, thanks to a bizarre error by Mile Svilar from Marcus Rashford’s goalbound free-kick. Ahead of their latest meeting on Tuesday, The Hard Tackle takes a closer look at the encounter.

Jose Mourinho’s injury woes have eased up in the last few weeks, but he still continues to remain without several important members of his squad. In fact, the Manchester United boss will be without as many as five key first-team players ahead of the visit of Benfica.

Marco Rojo (knee), Marouane Fellaini (knee), Michael Carrick (calf), Paul Pogba (hamstring) and Zlatan Ibrahimovic (knee) are all sidelined. Mourinho has provided clarity on the situation of just Rojo, with the Argentine defender set to return after the international break, that begins in a week’s time.

But, the absence of Carrick, Fellaini and Pogba is a major cause for concern for Manchester United fans, with Ander Herrera and Nemanja Matic the only remaining, fit senior midfielders. And the duo is likely to continue at the heart of midfield on Tuesday.

At the back, Victor Lindelof is expected to be restored into the starting eleven, and he is expected to line up alongside Chris Smalling at the heart of defence. Antonio Valencia and Daley Blind are likely to be the full-backs.

Rui Vitoria does not have many fitness issues on his hands ahead of the trip to Manchester on Tuesday. But, the Benfica boss has two players suspended, in addition to an injury absentee, meaning three key first-team players will be unavailable for the Matchday 4 clash.

Defensive duo Andre Almeida and Luisao are serving their respective bans, with the latter missing the game after seeing red in the reverse fixture two weeks ago. Centre-back Jardel is also unavailable due to a minor muscle injury.

Meanwhile, Mile Svilar is set to continue between the sticks for the Portuguese side on Tuesday despite a howler in the reverse fixture, with Vitoria imposing his faith in the youngster. Up front, Jonas is likely to get the nod ahead of Haris Seferovic, having shown remarkable form in front of goal in the league. 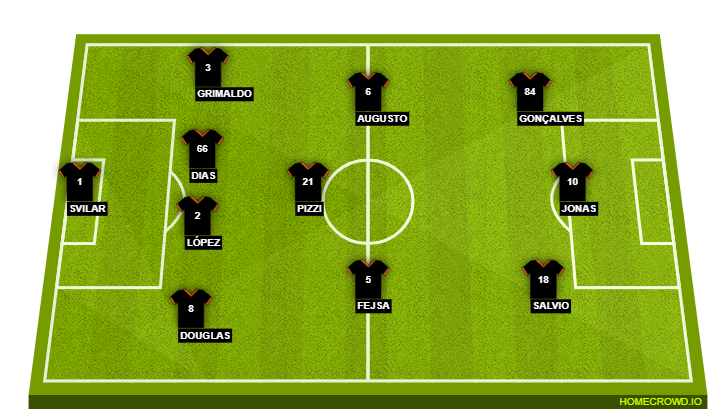 Two weeks ago, when Mile Svilar made his Champions League debut against Manchester United, he had a night to remember and forget at the same time. While he became the youngest ever goalkeeper in Champions League history, his costly error was the difference between the two sides in the end.

However, the mistake aside, the young Belgian had stood tall to the threat of the star-studded Manchester United attack, keeping them at bay for the most part. Another solid outing on Tuesday will go a long way in rebuilding his confidence, regardless of the result, and Benfica would be banking on his young shoulders.

Round of 16 qualification is almost secured for Manchester United, but a win against Benfica might just seal it for Jose Mourinho’s men. But, the Portuguese manager would have one eye on the weekend’s Premier League clash against Chelsea, and the intensity might just be pegged back a bit.

That being said, the hosts have enough quality in their ranks to pull off another positive result and continue their perfect run. The Hard Tackle, therefore, predicts a hard-fought 2-0 win for Manchester United, with Benfica getting closer to elimination from Europe.