Premier League moves into Gameweek 9 this weekend, with the first quarter of the season already set to be completed. In West Yorkshire, Manchester United will be aiming to get back to winning ways and continue their unbeaten run when they travel to The John Smith’s Stadium to face Huddersfield Town on Saturday.

The hosts’ form has petered out after a strong start to life in the Premier League. The Terriers have failed to win any of their last six games, having gone unbeaten in August and have plummeted to 12th in the table. David Wagner’s men come into the match on the back of a 2-0 loss to Swansea last weekend.

Manchester United, on the other hand, are flying high at the start of the season. Jose Mourinho’s men are yet to lose a game thus far, and have won all but two of their games. Their most recent result was a hard-fought 1-0 win over Benfica in the Champions League after what was an equally hard-earned point at Anfield over the last weekend.

The two sides last met in the erstwhile Division One League, with Manchester United running out 2-0 winners at Old Trafford. Ahead of their first ever meeting in the Premier League, The Hard Tackle takes a closer look at the encounter.

David Wagner does not have any fresh injury concerns ahead of the visit of Manchester United. However, the Huddersfield boss has a number of players dealing with fitness issues, and could be without as many as six first-team players on Saturday.

Kasey Palmer (hamstring), Michael Hefele (Achilles) and Jon Gorenc-Stankovic (knee) are certain absentees, with none of the players expected to return till mid-November at the earliest. But, Wagner is sweating over the fitness of Steve Mounie (heel), Collin Quaner (knee) and Philip Billing (ankle).

Aaron Mooy, though, is poised to return to the starting eleven after being dropped from the side against Swansea last weekend. Meanwhile, Jonas Lossl will be hoping to rediscover his early season form in order to frustrate Romelu Lukaku & co. 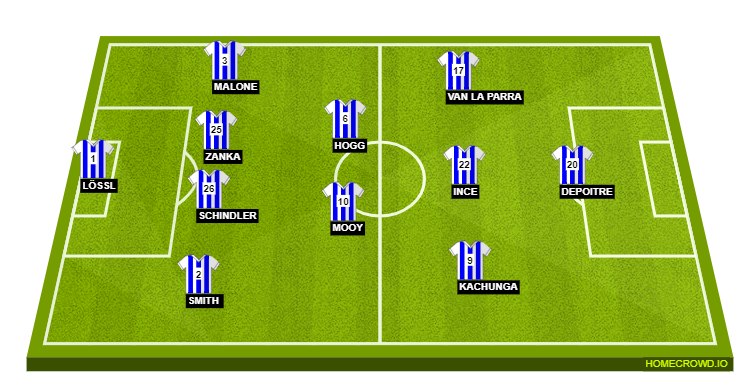 Jose Mourinho’s injury woes are easing with each passing week, with only one long-term absentee from his first-team squad. However, the Manchester United boss is still dealing with a number of short-term roster issues ahead of the trip to Huddersfield.

Zlatan Ibrahimovic is the long-term absentee, but the Swede returned to training earlier this week, and is targeting a return in December – a month ahead of schedule. Marcos Rojo, too, has made an early recovery from knee injury, and will be available in the next two weeks.

There are concerns around the fitness of Eric Bailly (groin) and Michael Carrick (calf) though, with Mourinho unable to provide a set return date for the duo. But, Paul Pogba (hamstring) and Marouane Fellaini (knee) are expected to be available within the next two weeks.

Meanwhile, there are additional concerns on the team news front, with reports claiming that Henrikh Mkhitaryan isn’t a part of the travelling squad. In the Armenian’s absence, Juan Mata could start in the number ten role, with Jesse Lingard or Ashley Young likely to be deployed on the right flank.

However, Marcus Rashford is fit and available after recovering from a minor knee injury that caused him to limp off the field against Benfica. But, Anthony Martial is expected to start in the Englishman’s stead, with Mourinho unlikely to risk the teenager.

Considered as one of the best playmakers in the Premier League, Juan Mata has seldom been able to showcase his entire set of skills at Manchester United, having been mostly deployed on the right side of the attack, albeit with a slightly free role.

With Henrikh Mkhitaryan reportedly not making the trip to West Yorkshire due to unspecified reasons, Mata has the opportunity to start in his preferred number 10 role. The Armenian has struggled to produce his early season form in the last few gameweeks.

Thus, a strong outing in the hole by Mata could perhaps help him cement a place in the role he favours playing in. His creativity from a central role could also prove to be beneficial to the form of Romelu Lukaku, who hasn’t been as effective in recent weeks.

After a rampaging start to the campaign, things have slowed down somewhat in the last two games for Manchester United. The game against a struggling Huddersfield side though, provides Jose Mourinho’s men with a chance to get back to their best form ahead of far tougher tests in the coming weeks.

The Terriers have largely been listless since August and are unlikely to pose much of a threat against a solid Manchester United side. Romelu Lukaku might find this game as the perfect outing to get back to scoring ways, and the Belgian should guide his side to a comfortable 2-0 win on Saturday.