Premier League action resumes this weekend as we move into Gameweek 9. At the Etihad Stadium, Manchester City will be aiming to continue their fine winning run and consolidate their place at the top of the table when they play hosts to high flying Burnley.

The hosts are yet to lose a match this season, and have only dropped points in league and Europe on one occasion – way back in August against Everton. Since then, the Pep Guardiola’s men have won ten games in a row, with the latest coming against a formidable Napoli side in the Champions League.

Burnley, on the other hand, have defied expectations and the infamous “second season syndrome” thus far, as they currently sit seventh in the Premier League table, having lost just once after the first eight gameweeks. The Clarets come into the match on the back of a closely contested 1-1 draw against West Ham United.

The corresponding fixture last season ended in a hard fought 2-1 win for Manchester City as the hosts saw off a resolute Burnley side. Ahead of their latest meeting on Saturday, The Hard Tackle takes a closer look at the encounter.

A 7-2 thrashing of Stoke City followed by a battling 2-1 win over one of the most in-form sides in Europe currently, Napoli, there’s just no stopping Manchester City at the moment. With one of the most fierce attacking units at his disposal, Pep Guardiola is well and truly starting to work wonders at the Etihad.

Kevin De Bruyne and David Silva have been given the task of dictating the pace of the game, which the duo have done effortlessly so far, running the games with elan, and with the likes of Leroy Sane, Raheem Sterling, Gabriel Jesus and Sergio Aguero in front of them, the Citizens are often scoring goals for fun.

On the injury front, there is very little troubling Guardiola, with Vincent Kompany (calf) and Benjamin Mendy (knee) the only absentees from his squad. But, with the likes of John Stones, Nicolas Otamendi and Fabian Delph defending well for the most part, the Manchester City boss wouldn’t be too bothered just yet.

Guardiola, though, could make a few changes to his starting eleven, having name an unchanged lineup in the last three games. The major change is likely to be Sergio Aguero, who has recovered from a rib injury and has made the matchday squads in the last two matches. Ilkay Gundogan is in contention for a start as well.

Burnley have started their 2017-18 Premier League campaign on a strong note, with Sean Dyche retaining the defensive shape that the Clarets are known for while also adding dynamism to their attack following the arrival of Chris Wood.

On the injury front, things are easing for the Burnley boss, although he still continues to remain without captain Tom Heaton, who is expected to remain sidelined for several weeks due to a shoulder injury. Also unavailable are Dean Marney (knee) and summer signings Jonathan Walters (knee) and Nahki Wells (foot).

Marney and Wells featured in Premier League 2 action for the Burnley under-23 side last week, but are still some way off coming into contention for the first team. Meanwhile, Dyche is expected to stick with the same starting eleven that came from behind to hold West Ham last week. 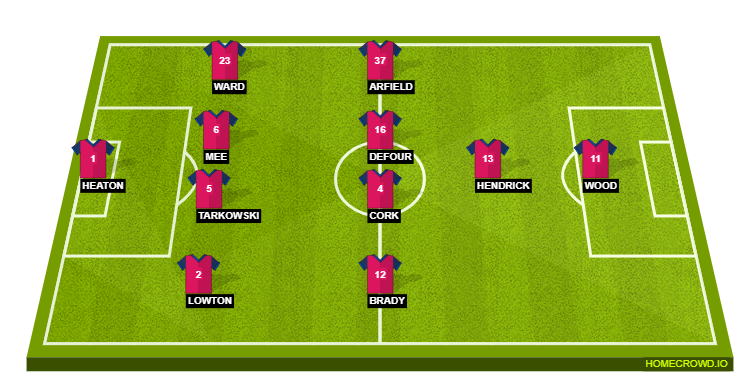 Mee will need to provide solidity and discipline at the back. (Photo courtesy Ian MacNicol/Getty Images)

An uncharacteristic error against West Ham turned out to be costly to a great extent as that arguably saw Burnley drop two points. Against Manchester City though, the English defender will need to be at his best against a formidable attacking unit in order to ensure his side take a point at the very least.

Not just that, the 28-year-old will also have to marshall his back four smartly to frustrate his former side throughout the match. Dyche will, therefore, be depending on his skipper to lead his side effectively in order to halt the Manchester City run.

There’s just no stopping Manchester City right now as they continue to scale newer heights with each passing game. Against Burnley, though, patience will be virtue for the Citizens, with Sean Dyche’s men boasting a well drilled, organised look that often frustrates the best of attacks.

The Clarets already have a major scalp in Chelsea on the road this season, and are yet to be beaten away from Turf Moor so far. However, Manchester City might just be a mountain too high to climb. Therefore, The Hard Tackle predicts a 3-1 win for the hosts, with Burnley to provide them some stiff competition on the day.