Arsenal will look to continue to their perfect start to the Europa League campaign when they face Red Star Belgrade on Thursday.

Arsenal turn their attention to European action on Thursday, aiming to extend their perfect start to the Europa League campaign and consolidate their place atop Group H. The Gunners travel to the Rajko Mitic Stadium to take on second placed Red Star Belgrade.

The hosts have kicked off their campaign in the Serbian SuperLiga on a strong note, having built up a four-point lead over rivals Partizan Belgrade at the top of the table. In Group H, the club is unbeaten after two games, but sit two points adrift of their visitors on Thursday.

The North London club, on the other hand, have made a poor start to their Premier League campaign, having taken just 13 points from their opening eight games. In Europe though, their maiden Europa League Group Stage campaign has started with a bang, with a perfect record after their first two games.

The two sides have previously met twice, with Red Star beating Arsenal in the 1978-79 edition of the UEFA Cup. Ahead of their latest meeting on Thursday, The Hard Tackle takes a closer look at the encounter.

Vladan Milojevic has a few roster issues to contend with ahead of the visit of Arsenal, and the Red Star Belgrade boss could be without as many as four first-team players on Thursday due to several injury concerns.

Ghanaian defender Abraham Frimpong and Brazilian winger Ricardinho are on the treatment table, with Milojevic unable to set an exact return date for the duo. Serbian forward Nemanja Milic has returned to training this week, but hasn’t built up enough fitness to be in line to face Arsenal on Thursday.

But, Milojevic confirmed that Gabon international Guelor Kanga is in contention to make the matchday squad, although his availability is likely to be determined by a late fitness test. The spotlight on the night though, will likely be on Richmond Boakye.

The Ghanaian striker has made a lot of waves with a stellar start to the campaign, scoring 11 goals from 17 appearances across all competitions, and has several clubs reportedly tailing him. Boakye will need to have his scoring boots on agains the Gunners to ensure a shock result for his side on Thursday. 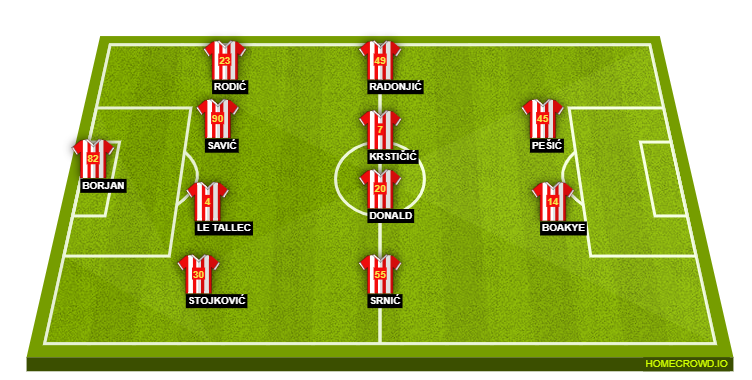 Arsene Wenger has a number of injury concerns to deal with ahead of the trip to Belgrade as well. The Arsenal boss could, in fact, be without the services of as many as five key first-team players on Thursday.

The major concern surrounds the fitness of Laurent Koscielny, who hobbled off the pitch against Watford on Saturday due to what is believed to be a recurrence of his Achilles injury. The Arsenal medical team is actively monitoring his recovery, and the Frenchman could be available on the weekend.

Danny Welbeck, too, limped off over the weekend after picking up a hamstring injury, and the English forward could be sidelined for a few weeks. Shkodran Mustafi (thigh), Santi Cazorla (Achilles) and Calum Chambers (hip) are long-term absentees.

Alexis Sanchez and Aaron Ramsey have taken part in training this week after missing the match against Watford due to fatigue. But, the duo is unlikely to feature on Thursday with Wenger likely to use the majority of his fringe players on the night once again.

Therefore, the likes of David Ospina, Reiss Nelson, Joe Willock, Ainsley Maitland-Niles, Theo Walcott and Olivier Giroud are expected to return to the starting lineup, with Jack Wilshere the creative powerhouse of the side.

One to look out for. (Photo courtesy – Cameron Spencer/Getty Images)

One of the young players who have benefitted from Arsene Wenger’s preference to play a second-string side in the Europa League, Willock has already managed to capture the adulation of fans in his young Arsenal career.

The teenager came close to scoring his first senior goal for the Gunners last time out against BATE Borisov, and his movement has proven to be quite menacing for defenders to deal with thus far. Another solid outing will be a step in the right direction, and Willock will hope to build on a strong start to his senior Arsenal career.

Things may not have been easy in the Premier League for Arsenal, but they have begun their Europa League campaign in the best possible way, with the fringe and youth players grabbing the opportunities being handed to them by Arsene Wenger.

On Thursday, the Gunners can get closer to qualification into the Round of 32 if they manage to open up a five-point gap over their nearest rivals, Red Star Belgrade. However, the Serbian side has been solid at the back thus far this season, having conceded just three goals in 14 games in league and Europe.

Therefore, it should be a keenly contested tie in Belgrade, with midfield control being key to success. Jack Wilshere’s form and class though, give Arsenal a distinct edge heading into the match, and the Englishman should lead his side to a hard-fought win on the night. The Hard Tackle predicts a 2-1 win for the visitors.