Bayern Munich will kick off their 2017-18 Champions League campaign when they welcome Anderlecht to the Allianz Arena on Tuesday.

Bayern Munich’s 2017-18 Champions League campaign begins with the group stage on Tuesday, as the German champions host last term’s Belgian champions RSC Anderlecht at the Allianz Arena. Anderlecht are currently 10th in the Jupiler Pro League, with a 2-2-2 record.

A dominant performance by Bayern tonight can help the club move past a few ongoing scandals. Robert Lewandowski is believed to be unhappy at the club while speculation seems rife regarding Thomas Müller leaving the club and playing elsewhere. To top it off, they endured a 0-2 loss to TSG Hoffenheim on the weekend, and will be looking to set things right.

Anderlecht, on the other hand, do have a very long history in European football, but they were left behind long ago as money started to equal power. This is their first Champions League group appearance since 2014, and whilst they have been regulars in the Europa League, it’s the furthest they have managed in a long time.

Rafinha is expected to fill in for David Alaba at left-back, and Bayern will have the added support at the heart of defence, with Jerome Boateng now deemed fit to play. Arturo Vidal, though, will serve a one-game suspension for being sent off in Bayern’s second quarter-final match against Real Madrid last season.

No goals over the weekend will mean that Lewandowski will be very eager to get his name on the score sheet and prevent the onslaught of a possible drought period.  The Polish striker was in hot form during international duty, and he will likely be back on the score sheet here against a weaker Anderlecht side.

As for how the rest of the team lines up, Carlo Ancelotti has does have some flexibility, especially in the midfield and attack. 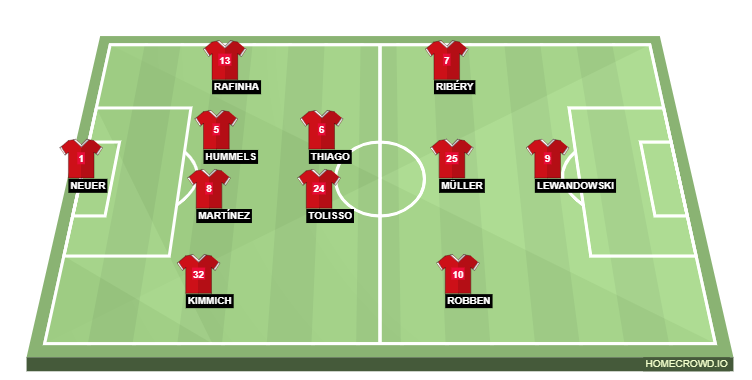 Rene Weiler has no injuries or suspensions to deal with as his side faces the daunting task of traveling to Munich to face off with Bayern. Anderlecht have not started their season off with much form, having notched up just two wins in their six league matches so far. But one of them came on Friday at home against Lokeren.

One man who can cause some serious problems for Bayern is winger Henry Onyekuru. The 20-year-old Nigerian scored two goals over the weekend to get up and running for the season.  His pace and skill could present a real danger to Bayern if they lose the ball in the midfield area since Anderlecht can break quickly.

Meanwhile, the prospect of restricting a player like Lewandowski can prove to be a scary thought for Anderlecht’s back-line. Olivier Deschacht and Uros Spajic are the likely central defensive pairing to play tonight and will have to be on top of their game if they are to stop the Pole from bagging a goal or two.

Anderlecht don’t have too many star names going forward, so scoring goals could pose a problem for the Belgians, especially as they’re coming up against a strong Bayern defence. As a result, it will be vital for the Anderlecht defence to keep Lewandowski at bay, if they are to get anything out of the game.

Anderlecht could park the bus from the kick-off as they try to avoid the onslaught from Bayern, who will be peppering the Belgian champions’ goal from the outset. Regardless, it will be a long night for the travelling fans as Bayern are expected to run rampant on the opening night of the Champions League.

Besides, Bayern are overwhelming favourites in this match and they would have been favourites even if this was an away fixture. In addition to that, this is not a team that takes losing lightly, and they rarely ever lose two matches in a row. They will be motivated to find success, and that means preventing a losing streak.

The Belgians could have been a side that causes some problems for them if they were in good form, but that is far from the reality at the moment given how they have performed in the Jupiler Pro League so far this season. Hence, THT predicts a comfortable 2-0 victory for the home side.