Arsenal will look to maintain pace with Liverpool and Manchester City when they travel to the Bet365 Stadium to take on Stoke City on Saturday.

Arsenal will aim to keep their Top 4 hopes alive when they face Stoke City at the Bet365 Stadium on Saturday. With just three games left in their campaign, Arsene Wenger’s men cannot afford any more slip-ups in their late bid to make the Champions League.

Stoke come into this match on the back of a 2-2 draw at Bournemouth last week after the Cherries twice came from a goal down to ensure a share of the spoils. Mark Hughes’ men have stuttered of late, with just one win in their last nine games – a sequence of results that have left them 13th and only an outside chance to finish in the top half of the table.

Meanwhile, the visitors have been showing signs of a late turnaround in form, coming into this match on the back of a comfortable 2-0 win over Southampton on Wednesday. Having won 4 of their last 5 league games, Arsenal are just a point adrift of fourth-placed Manchester City.

The reverse fixture, at the Emirates, ended in a 3-1 win for the Gunners as they came from a goal down to convincingly beat Stoke. The Hard Tackle now takes a closer look at the return game, due to be played at the Bet365 Stadium on Saturday.

Mark Hughes has no fresh injury concerns to deal with ahead of the visit of Arsene Wenger’s men on Saturday, as he has just two players missing from his squad due to long-term injuries.

Dutch midfielder Ibrahim Afellay is recovering from a knee injury, while Irish midfielder Stephen Ireland has a broken leg. The duo have had their seasons end prematurely and will only return in time for the pre-season for the 2017/18 campaign.

Thus, Mark Hughes has some big decisions to make ahead of Saturday’s match, particularly in attack where Mame Biram Diouf, Peter Crouch and Jonathan Walters all being enticing options to be the focal point up front.

The other dilemma will revolve around the selection of a right-back with Glen Johnson and Phil Bardsley at Mark Hughes’ disposal. Meanwhile, the onus on getting all three points will rest on the shoulders of the mercurial duo of Marko Arnautovic and Xherdan Shaqiri, both of whom can create a moment of magic out of nowhere. 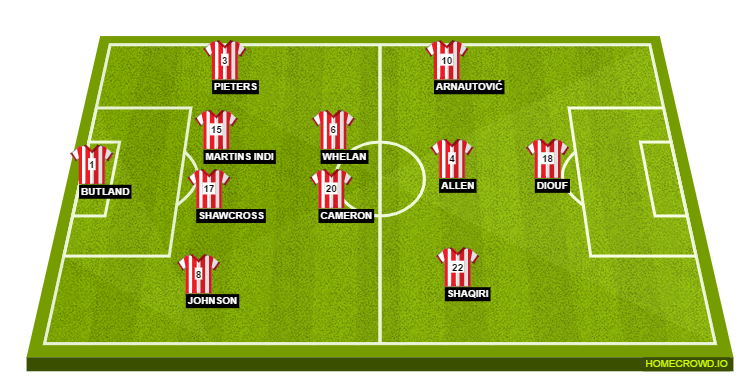 Mark Hughes’ counterpart in the Arsenal dugout, Arsene Wenger, meanwhile, is not as lucky as the Stoke City boss as far as personnel availability issues are concerned, with two key players missing the trip to the Bet365 Stadium.

Laurent Koscielny, who has filled in as Arsenal’s captain in the absence of Per Mertesacker all through the campaign, is still not at a 100% having picked up a knock in the win over Manchester United last weekend.

In his absence, Rob Holding, Shkodran Mustafi and Nacho Monreal are likely to continue in the three-man central defensive partnership, with Gabriel the fourth option at Wenger’s disposal. Alex Oxlade-Chamberlain is also a big miss for the Gunners as he is sidelined with a calf injury.

The Englishman sustained the injury in the midweek game against Southampton, and he is unlikely to be available before the FA Cup final, if at all. Out-of-favour Spaniard Hector Bellerin is expected to start in Oxlade-Chamberlain’s stead as the right wing-back on Saturday. 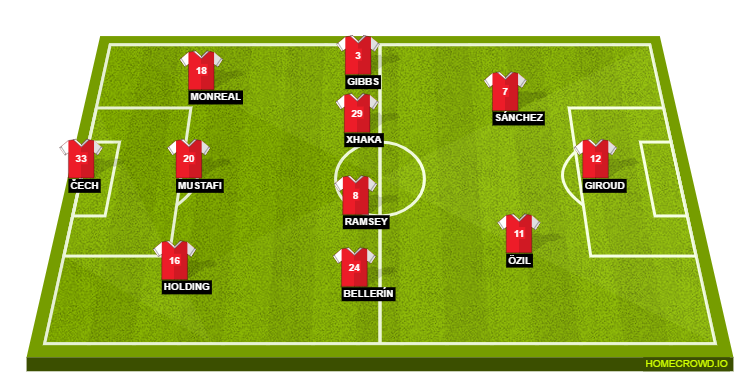 Just three games remain in the season for Arsenal, and with third-placed Liverpool – who have a game in hand – just four points ahead, a direct qualification into the Champions League can’t be ruled out. The first of these three finals come against Stoke City – a daunting away day trip in the years gone by.

However, recent form suggests that Stoke might not have quite the same upper hand as they usually have over the years. That is because the hosts’ form has petered out in stunning fashion, and they have won just three of their 15 league games this season, dropping out of the top half of the table in the process.

On the other hand, Arsene Wenger’s men have showed signs of turning their fortunes around in the last leg of the season. They also seem to be in the mood to turn around some of their poor records, with an away win over Southampton following Arsene Wenger’s first league win over Jose Mourinho last weekend.

Aaron Ramsey and Granit Xhaka will be the key players for Arsenal, and with the duo finding form at the right time, they are likely to be the difference makers for their side. The Hard Tackle predicts another comfortable win for the Gunners.