The penultimate stage of the UEFA Champions League is underway and the second semifinal sees the most prolific team in Europe come up against the best defence in the continent to set up a tantalising contest as AS Monaco host Juventus at Stade Louis II on Wednesday.

Leonardo Jardim’s men progressed to the semifinals thanks to an impressive 6-3 aggregate win over Borussia Dortmund in the Last 8 stage. The principality club come into this match on the back of a 3-1 win over Tolouse in Ligue 1 that got them a step closer to the title.

The visitors, meanwhile, qualified for the last 4 stage with a comfortable 3-0 aggregate win over the mighty Barcelona in the quarterfinals. However, they will be looking to get back to winning ways on Wednesday after they were held to a 2-2 draw at Atalanta on the weekend.

The two sides have met four times previously, with Juventus holding a slightly superior record over Monaco (W2 D1 L1). The Hard Tackle takes a closer look at Wednesday’s match as the French and Italian champions-elect face off against each other.

Leonardo Jardim does not have many injury concerns on his hands, but he will be without the services of two key first-team players on Wednesday, with Djibril Sidibe a certain absentee and Tiemoue Bakayoko a major doubt.

Right-back Sidibe has been out of action for nearly a month now due to appendicitis and no set date has been earmarked for his return. Meanwhile, Bakayoko is suffered a broken nose in a training ground incident involving teammate Kamil Glik and is unlikely to feature on Wednesday.

In Sidibe’s absence Nabil Dirar is expected to continue as right-back, with Glik and Andrea Raggi manning the heart of the Monaco defence. Benjamin Mendy is likely to return at the left side of defence, providing a timely boost to Jardim’s side.

Portuguese midfielder Joao Moutinho is likely to replace Bakayoko in the centre of the park, where he should have Fabinho for company. But the spotlight will be on the likes of Bernardo Silva, Thomas Lemar, Kylian Mbappe and Radamel Falcao, who will attempt to breach the meanest defence in Europe. 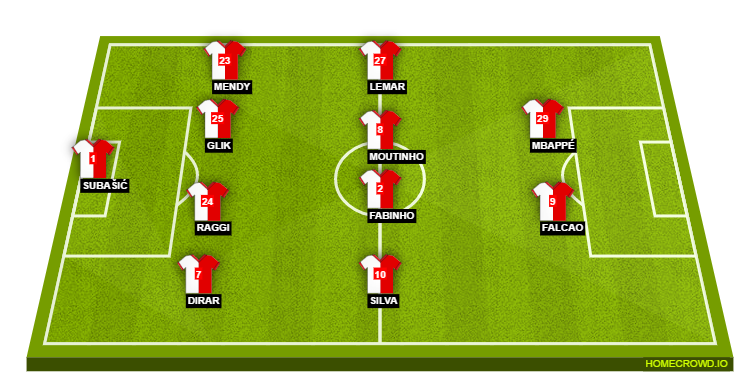 Like his counterpart in the Monaco dugout, Massimiliano Allegri does not have many fitness issues to deal with either. But, he is missing three players due to injuries and suspension, with Marko Pjaca, Daniele Rugani and Sami Khedira missing out on Wednesday.

Croatian forward Pjaca is a long-term absentee, having sustained a cruciate ligament injury in March. He will not play any further part this season and is unlikely to regain fitness in time for the onset of next season.

Centre-back Rugani, meanwhile, sustained an injury to his knee last week and it is likely that his season has ended prematurely. However, his absence is unlikely to affect Allegri’s defensive plans for the trip to Monaco, with Leonardo Bonucci and Giorgio Chiellini set to be deployed as the centre-backs.

Meanwhile, German midfielder Khedira is suspended for a match and will only be able to play a part in the second leg. In his absence, veteran midfielder Claudio Marchisio should partner Bosnian playmaker Miralem Pjanic at the heart of the Juventus midfield. 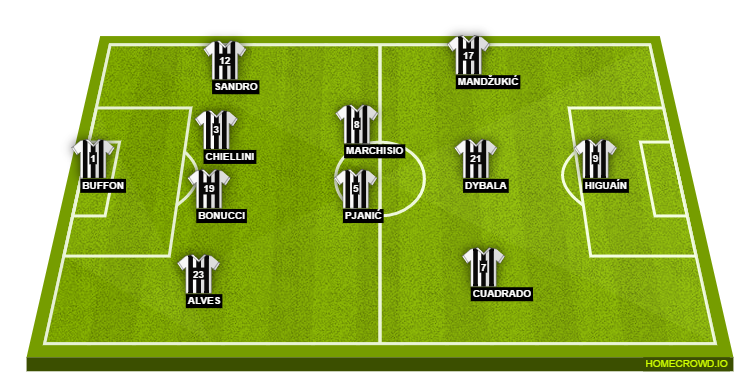 The kid is on fire! (Photo courtesy – Sacha Schuermann/AFP/Getty Images)

Monaco have taken European football by storm this season with their exploits in Ligue 1 and Champions League. While it has been a complete team effort, a few players have surprised one and all with their performances.

One such player is Kylian Mbappe. All of 18, the French wonderkid has turned into a prolific forward and has the whole of Europe chasing after him after what has been a sensational breakthrough campaign.

The records he boasts of are exemplary, the most impressive of which is that he is the youngest player to reach 5 goals in Champions League knockout stages. He was one of the best performers for Monaco in the last two stages and he will need to be at his best yet again to make an impact against the best defence in Europe on Wednesday.

This has become one of the most highly anticipated encounters in the Champions League in recent memory, bringing the most dangerous attack in Europe as well as the meanest defence in the continent together on the same pitch.

Monaco and Juventus are two sides that look destined to clinch the top flight titles in their respective leagues, and are thus looking to make it a season truly worth remembering by attempting to win the Champions League.

One side can get closer to realising that dream on Wednesday, while the other could be teetering on the brink of exit at the penultimate stage. Based on form and knockout records, Leonardo Jardim’s men hold a slim advantage ahead of the Bianconeri.

Juventus’ away record in the Champions League is quite dismal while Monaco are one of the strongest teams at home. So while it is set to be a closely contested affair at Stade Louis II on Wednesday, Monaco look the likeliest to get the win. The Hard Tackle predicts a 2-1 win for the Principality club.