A severely depleted Manchester United will look to close the gap on fourth-placed Manchester City when they take on Burnley at Turf Moor on Sunday. The reverse fixture at Old Trafford saw Burnley captain Tom Heaton make 11 saves to frustrate Jose Mourinho’s men to a goalless draw.

The hosts come into this match on the back of a 3-1 loss against Everton at Goodison Park that dropped them below West Ham United in 14th place in the Premier League table. The Clarets are just 4 points away from a place in the top 10, and a strong end to the season could see them finish inside that half of the table.

Meanwhile, Manchester United most recent league outing was their remarkably comfortable 2-0 winner over table-toppers Chelsea, as Marcus Rashford and Ander Herrera ensured a big win for Mourinho’s side. The result meant that Manchester United remain four points behind Manchester City, who are 4th in the table.

The Hard Tackle takes a closer look at the return fixture at Turf Moor, with Manchester United looking to continue their unbeaten run.

Sean Dyche has a few injury concerns on his hands ahead of the visit of Manchester United on Sunday, with two key players major doubts due to fitness issues. Sam Vokes is suffering from a “tight hamstring” as per the Burnley boss and is a 50-50 for Sunday.

Midfielder Scott Arfield also finds himself in a similar predicament as he struggles with a knee injury. Dyche is unlikely to take a risk with either on Sunday, with Ashley Barnes and George Boyd available for selection.

Meanwhile, veteran midfielder Dean Marney will not play a part again this season after he suffered a cruciate ligament injury in January. However, Dyche is greeted with the good news of the fit-again Johann Berg Gudmundsson, who has missed the last two months of action due to a knee injury.

The Iceland international is unlikely to slot straight back into the starting eleven, but he does hand his manager an additional option. One player who is set to return to the lineup on Sunday, though, is Joey Barton after he was cleared to feature following the adjournment of the FA hearing into his alleged betting breaches.

The onus on Sunday will be on Manchester United graduate Michael Keane and his partner Ben Mee, alongside their experienced captain Tom Heaton, to repeat the exploits from the reverse fixture in October, in order to thwart the visitors in their Top 4 charge. 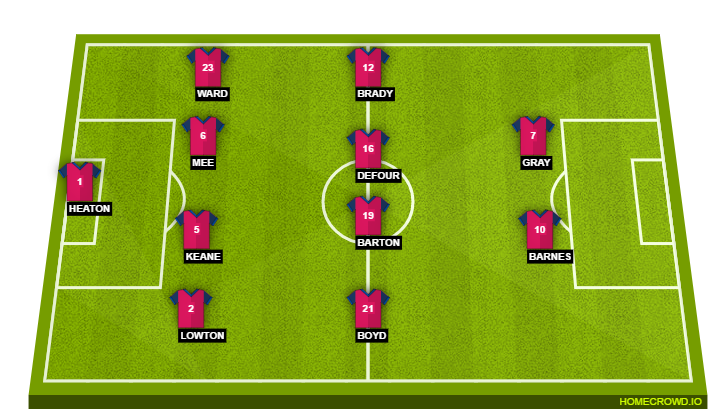 Sean Dyche’s counterpart in the Manchester United dugout, Jose Mourinho, meanwhile is in deep trouble as far as fitness issues are concerned, with as many five key first team players who will not play another minute of football again this month.

The latest players on the treatment table are Marcos Rojo and Zlatan Ibrahimovic who sustained long-term knee injuries in Manchester United’s Europa League match against Anderlecht on Thursday, thus in all likelihood ending their campaigns.

The Manchester United boss is effectively forced into fielding Eric Bailly and Daley Blind as his central defensive partnership. Mourinho also hinted that Ashley Young will start, and the English veteran is likely to replace Luke Shaw at left-back after he suffered from cramps in the midweek game.

Meanwhile, Wayne Rooney is fit and available after recovering from an ankle injury, and he could play a part to provide some relief to a squad that has barely been able to catch a breath of late. Marcus Rashford is set to lead the Manchester United attack for the rest of the season in Ibrahimovic’s absence. 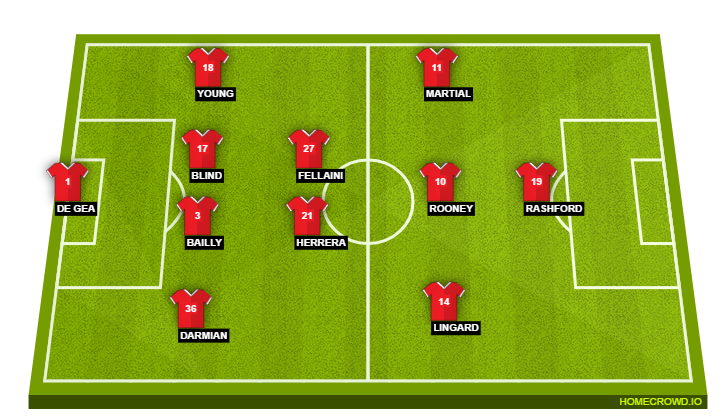 Zlatan Ibrahimovic suffered a gruesome knee injury in Manchester United’s 2-1 win over Anderlecht on Thursday, and it is believed that it has brought about an end to his campaign a month early.

As a result, it is almost certain that Marcus Rashford will now be thrust into the starting lineup for the trip to Burnley and beyond. Thus, the bulk of the goalscoring burden will now rest on his young shoulders.

It goes without saying that the Englishman will have to continue a fine run of form that has seen him make a direct contribution to four goals in his last four appearances for Manchester United. He will need to be on top of his game again on Sunday in order to eke out a win for Mourinho’s side.

The final leg of the season is well underway, and it is that part of the campaign when every point is precious for different teams in different parts of the table. Manchester United need all three to continue their charge towards the Top 4, while Burnley need a few more to ensure Premier League safety for the first time.

Having said that, recent form suggests that the visitors hold a bit of an upper hand despite Burnley boasting of such a formidable record at Turf Moor. Manchester United are much better performers on the road having earned 30 points from 14 games, and Burnley have only won once in their last 10 games.

However, fatigue could play a part, with some of the most key Manchester United players playing their third game within a week, and this is likely to be another closely contested affair between the two sides. The Hard Tackle predicts a hard-fought 1-0 win for Jose Mourinho’s men.