England host Lithuania at the Wembley Stadium needing a draw to maintain their top spot in Group F of the European Qualifiers for the 2018 FIFA World Cup.

England have been providing everyone with perhaps the perfect spectacle on how to be dominating in the qualifiers without scoring much goals. The Three Lions have just 6 goals in 4 games but are yet to concede a goal in the group yet, a statistic that has helped them to the top of the table.

Lithuania, on the other hand, were never expected to give much competition for the top places in the group. However, they currently find themselves above Scotland in 4th place, just 1 point behind third-placed Slovakia. And, they can further establish themselves as a noteworthy side in Europe, with a result on Sunday.

A win for England could see them move to 13 points after 5 games, a brilliant tally to have as the first half draws to a close. We at The Hard Tackle take a closer look at the fixture.

Gareth Southgate has been hit with an injury crisis with several players withdrawing due to injuries received in training. Manchester United duo Phil Jones and Chris Smalling have both withdrawn from the squad, which will deplete the Three Lions’ defence to a large extent, especially with Gary Cahill serving a suspension.

Southgate used a 3-4-2-1 formation in the narrow 1-0 loss to Germany in a friendly on Wednesday evening but is expected to revert to a back four. Defensive injuries could see Michael Keane retain his spot at the back, with John Stones the likely player to be called to the starting eleven.

However, the boss does have Ben Gibson in the squad as well, who could come into the picture if Southgate retains his formation from the Germany friendly. Elsewhere, Sterling is a doubt and is unlikely to start, with so many talented players at Southgate’s disposal.

Ross Barkley could see some game time, especially with no Wayne Rooney. Southgate has three options for the forward position – Defoe, Rashford and Vardy. Vardy was handed the start in the friendly which is likely to mean that either Defoe or Rashford could be the manager’s choice for Sunday. 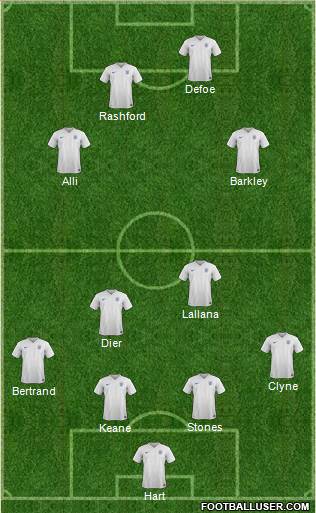 Lithuania come into the match as huge underdogs but have no injury concerns or players out with suspensions. Edgaras Jankauskas is likely to deploy a 4-2-3-1 formation on Sunday, with 31-year-old Ernestas Setkus commanding the goal.

The veteran is probably the most high-profile player to be in the starting eleven, currently plying his trade in the Eredivisie. England are the heavy favourites and given the attacking talent at their disposal, they are likely to pose continuous threats on Lithuania’s goal.

Setkus could prove to be the shield that guards Lithuania’s chances of gaining a result and avoiding a humiliation on Sunday.

2. Ben Gibson could be in line to make his senior Three Lions debut on Sunday, which is most likely possible if Southgate starts with a back three.

3. Jermaine Defoe has received a call-up after a very long time and while he did not feature against Germany, he could be in line to appear against Lithuania.

4. Lithuania could become the first team in Group F to breach the Three Lions’ defence, with England yet to concede in the group stage thus far in the 2018 qualifiers.

It would be cruel from Gareth Southgate to call Defoe to the national squad and not give him some playing time and a chance to don the Three Lions jersey again.

Defoe is by far the most natural English striker in recent times to grace the England jersey, which can be mapped by his magnificent return for Sunderland, at the age of 34, in what is termed the most competitive and tasking league in football.

It would be amazing to see how Defoe features and whether the player is able to mark his return to the national setup with a goal.

Lithuania’s matches, as mentioned above, average about 3 goals per game and Sunday could see just as many goals, albeit with all of them coming from the home side.

England suffered a narrow loss to Germany in the friendly on Wednesday and would be keen to get going in front of goal after what has been a very quiet Qualifying campaign thus far.

Dele Alli was impressive against Germany and could be one of the players to get their name on the scoresheet.