It’s Matchday 19, and Barcelona will look to continue their recent positive form when they visit the Ipurua Municipal Stadium to face Eibar on Sunday.

The title race has been thrown wide open after Sevilla beat Real Madrid 2-1 at the Ramon Sanchez Pizjuan Stadium to leave the Top 3 separated by just two points, albeit with Los Blancos having a game in hand on their La Liga title rivals.

Barcelona now have a chance to re-establish their title credentials, and keep the pressure on Real Madrid and Sevilla when they take on Eibar on Sunday night. Also, with this being the final fixture of Matchday 19, Barcelona will be under pressure to improve or match their rival’s results.

The hosts come into this match on the back of a thumping 3-0 loss at the hands of Atletico Madrid at the Vicente Calderon. The visitors Barcelona, on the other hand, have now won three in a row and will be full of confidence after their first win at Real Sociedad in ten years.

The Hard Tackle takes a closer look at what promises to be a very intriguing match at the Ipurua Municipal Stadium on Sunday.

Eibar manager Jose Luis Mendilibar has quite a few injury concerns on his hands, particularly in defence, where his side is severely depleted in terms of resources, with Ivan Ramis (ankle), Anaitz Arbilla (doubtful), David Junca (ankle sprain) and Asier Riesgo (knee) all unlikely to feature due to their respective injuries.

That will prompt Mendilibar to field a back four, with Yoel manning the goal. Mauro Dos Santos and Florian Lejeune are likely to start in the heart of the Eibar defence, with Ander Capa and Antonio Manuel Luna starting on either side of the centre-backs.

Meanwhile, Kike (fractured leg) and Nano (ankle) are the other absentees, with the two attackers out with mid-to-long term injuries. Eibar no. 9 Sergi Enrich will start as the focal point of the Eibar attack in their stead.

Thankfully for Mendilibar, he has all his first choice midfielders fit and available and the likes of Fran Rico, Dani Garcia, Adrian, Pedro Leon and Takashi Inui are all expected to start to counter Barcelona’s superstar midfield and attack. 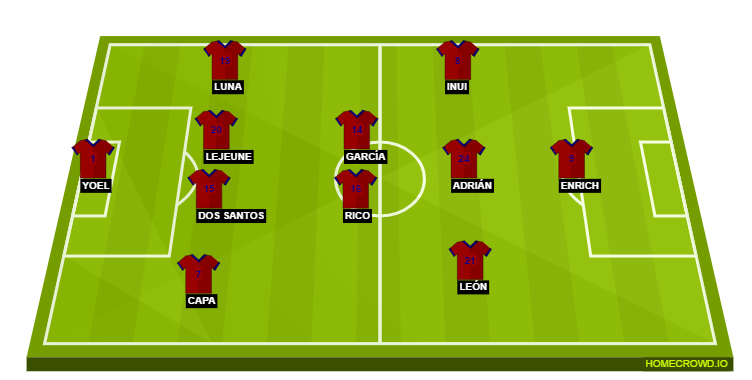 The Barcelona manager Luis Enrique, on the other hand, does not have as many injury concerns on his hands, and takes a near full strength squad to the Ipurua Municipal Stadium on Sunday night to take on Eibar.

However, the Barcelona boss does have a huge blow to deal with, as club captain Andres Iniesta is ruled out from Sunday’s match due to a calf injury, which requires further tests to be assessed on. Meanwhile, Rafinha is doubtful with a hamstring strain, and Enrique is unlikely to risk the midfielder.

Argentina international Javier Mascherano will also remain unavailable on the night as he is suspended after picking up his fifth yellow card of the season in the 5-0 win over Las Palmas last week.

Iniesta’s absence, though, means that Ivan Rakitic is all set to start his first game in La Liga since the 1-1 draw against Real Madrid last month, having turned in impressive performances in cup ties against Real Sociedad and Athletic Bilbao this month. Andre Gomes could also make a rare start in the Barcelona midfield. 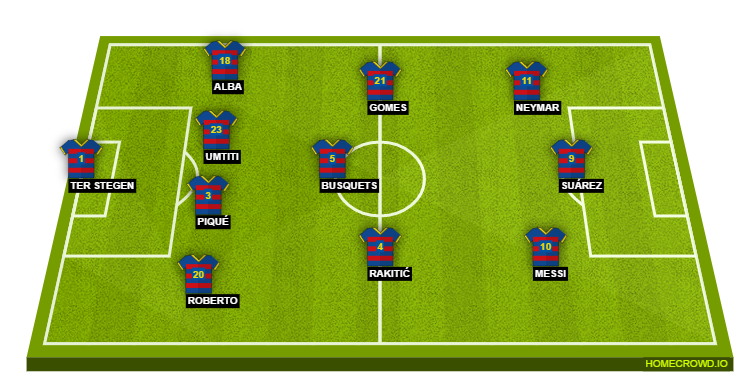 Barcelona have rediscovered their winning touch in the last week or so, with impressive victories over Ahtletic Bilbao, Las Palmas and, more tellingly at Real Sociedad, indicating that Luis Enrique’s side may have turned a corner this season.

Sevilla’s win over Real Madrid last week has put the Blaugrana within touching distance of their fierce rivals, who looked to be cruising to the league title. However, it now looks as if this will be one of the most closely contested title race in recent memory, with Sevilla surprisingly in the mix as well.

Luis Suarez and Lionel Messi seemed to have found their scoring boots; the Uruguayan having scored in four of his last five games, while the Argentina captain has found the back of the net in each of his last four outings.

However, Sunday’s match might not be as straightforward as it seems, with Eibar only losing two games at home all season. The impetus will be on their midfield to withstand the Barcelona test, and come up with the goods. We predict a close win for Barcelona, with Enrique’s side winning by the odd goal.