Joachim Löw’s Germany overcame the test against Antonio Conte’s Italy last week. They are now tasked with breaking down a French side in their own backyard to secure progress to a seventh European Championship final.

By overcoming Italy and qualifying for the semi-finals, Joachim Löw managed to keep intact his track record of having guided Germany to a semi-final in every major tournament that he’s been in-charge. Löw stands at the cusp of managerial glory, with a potential continental triumph making him only the second German manager after Helmut Schön (West Germany – Euro 1972, World Cup 1974) to win both the Euros and the World Cup.

Hosts France, on the other hand, are only two matches away from winning yet another major tournament on home soil after a Michel Platini-led European triumph in 1984 and a 1998 World Cup win under the leadership of current manager Didier Deschamps. The massive semi-final clash on Thursday will write a new chapter into the footballing rivalry between the two European powerhouses as France will look to end a dismal record in major competitions by beating Germany for the first time since their 6-3 win over West Germany in the 1958 World Cup.

Incidentally, the two sides have never faced each other in the Euros before. Marseille, on Thursday, will stage the first continental encounter between them.

After a run of unconvincing victories, Didier Deschamps’ side comfortably demolished a spirited Iceland outfit with an emphatic 5-2 scoreline to seal their date with the Germans in the semi-final. Their victory over Iceland came at the back of a change in formation in lieu with N’Golo Kante’s absence, who was suspended after picking up his 2nd yellow card in the competition against the Republic of Ireland. The deployment of a 4-2-3-1 formation where Moussa Sissoko, Antoine Griezmann and Dimitri Payet sat behind Olivier Giroud in attack with Paul Pogba and Blaise Matuidi taking the midfield roles gave the French more attacking impetus and freedom than they had all competition.

The return of Kante will present a tactical dilemma for Deschamps who will have to take a decision over the kind of formation he’d like to field against the Germans. Their 4-3-3 formation saw them concede just two goals (both being penalties) in the four games prior to the quarter-final, whereas they conceded two goals from open play against Iceland fielding the 4-2-3-1 formation. With Germany’s midfield and forward line taking a hit with injuries, Deschamps may be inclined to field Kante in their normal three-man midfield along with Pogba and Matuidi to give his French side control over the centre of the park.

That said, it’s worth noting that since Kante’s half-time substitution in the Republic of Ireland game, France have gone on to score seven goals in 135 minutes when they managed only four in the previous 315 minutes. While there’s no questioning the quality Kante brings to that midfield, a deficiency in attacking verve over players like Kinglsey Coman and Moussa Sissoko may work against the Leicester City starlet. Therefore we can expect Deschamps to field a 4-2-3-1 formation that brought the best out of Griezmann and Giroud up-front.

FC Barcelona bound Samuel Umtiti enjoyed a brilliant debut for Les Bleus and didn’t put a foot wrong in an authoritative performance over the Vikings. This will give Deschamps another selection dilemma ahead of the semi-final with Adil Rami returning to the scheme of things after serving his one match suspension. 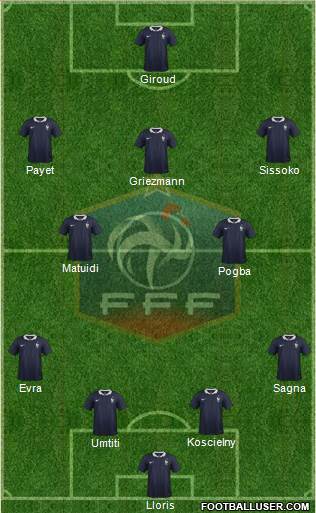 The World champions have a host of injuries and a suspension to worry about going into the crunch game against France on Thursday, with key figures like Sami Khedira, Mats Hummels and Mario Gomez all ruled out. With Manchester United’s Bastian Schweinsteiger also doubtful, Liverpool’s Emre Can along with Borussia Dortmund’s Julian Weigl are in pole position to take up one of those midfield roles.

Joachim Löw spoke highly of the young midfield duo and refused to eliminate the possibility of the two players featuring for the Nationalmannschaft on a big occasion like a European semi-final against France. It’s quite certain that Germany will not employ the 3-5-2 formation from their quarter-final victory over the Italians and could return to their preferred 4-2-3-1 set-up. While their deployment of the 3-5-2 against Antonio Conte’s Italy was a successful tactical move, Löw, at the moment, doesn’t have the resources to field the similar formation once more against Les Bleus and is expected to revert to fielding four at the back.

Andre Schurrle could be deployed as a lone striker with the trio of Julian Draxler, Thomas Muller and Mesut Ozil sitting behind the Wolfsburg star. Can or Weigl could take their spot next to Real Madrid’s Toni Kroos with Benedikt Howedes and Jerome Boateng holding the defence together from their centre-back positions. Jonas Hector and Joshua Kimmich have been solid for the Germans in the tournament and are primed to start in the fixture against France as well. 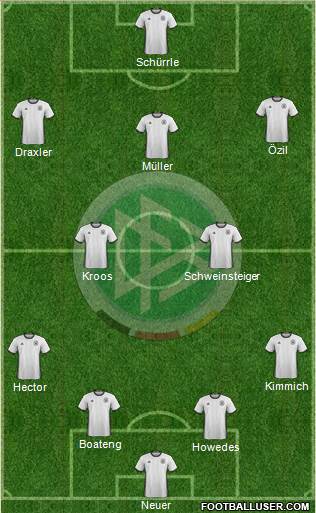 France’s forward Antoine Griezmann celebrates after he scoring the fourth goal for France during the Euro 2016 quarter-final football match between France and Iceland at the Stade de France in Saint-Denis, near Paris, on July 3, 2016.
(Photo credit: FRANCK FIFE/AFP/Getty Images)

The Atletico Madrid star thrived in the 4-2-3-1 set-up deployed by Deschamps in their 5-2 quarter-final victory over Iceland. Should the French boss decide to field the same formation once more, the German defence, in the absence of Mats Hummels, will have a huge task on their hands keeping Griezmann at bay. The 23-year old has consistently pulled the French out of trouble this tournament and the semi-final clash against World Champions Germany could prove to be the ideal test of his match-winning credentials.

In the absence of Sami Khedira and Bastian Schweinsteiger, the manner in which Real Madrid star Toni Kroos goes about his work in midfield could go a long way in influencing Germany’s game-plan against the French. Kroos will have to lead from the front if his side are to take control of the midfield over an opponent lineup featuring the likes of Paul Pogba and Blaise Matuidi.

France have shown that they can create opportunities and demolish opposition on their day but with Germany presenting Les Bleus’ first real test in the competition, Deschamps will be tasked with tactically making the best use of his talented squad against a dangerous World Champion side. Having historically failed to muster domination over the Germans in major competition and the latter’s terrific record of six wins out of seven in semi-finals against major tournament hosts, the odds are stacked against the French.

But this tournament has also shown Deschamps’ side’s tremendous fighting spirit often taking it till late but completing the job for the host nation. It will be a marvellous exhibition of talent and despite the award winning pedigree of Low’s team, France may just pip the World Champions to a European final place.

One would have to dig up the archives and go all the way back to 1958 if they were to date the last time the French beat the Germans in a major tournament when Les Bleus emerged 6-3 victors in a 3rd place match at the World Cup staged in Sweden.