Chelsea star Marcos Alonso has opened the door for a return to Spain, as he is eager to test himself in La Liga before his career ends.

Marcos Alonso is a well-known footballer who has made a name for himself while playing for Chelsea. He has turned out 200 times for the Blues, scoring on 26 occasions since joining in 2016, winning the Premier League title in his first season in London.

Despite starting well under then manager Antonio Conte, Alonso has not been a regular feature for Chelsea over the years, under the Italian’s successors. Maurizio Sarri seemed to be split between him and Emerson Palmieri, while Frank Lampard barely used him during his time at the helm.

He has regained a regular place under Thomas Tuchel, owing to the German’s specific system needing wing-backs. Alonso has also been fortunate due to Ben Chilwell’s injury, which has seen him play many games this season. There have been times when the full-back came close to leaving Chelsea in the past, and the time for an exit may be inching closer as interest from La Liga clubs mounts.

Alonso has opened the door for a return to Spain, as his comments, quoted by Sport Witness via AS, reveal. The full-back insisted that he would like to test himself in his homeland. 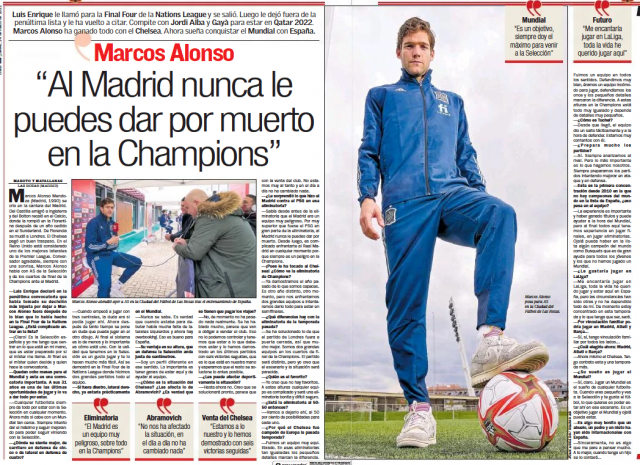 Alonso said, “I would love to play in La Liga, all my life I have wanted to play and be here in Spain, but the circumstances have been different and not everything has depended on me. At the moment I am focused on this season and what has to be, will be.”

On further probing by Spanish outlet AS, the wing-back revealed he has multiple ties to Real Madrid, Atletico Madrid and Barcelona. He hinted at a move by pointing towards his current Chelsea deal, saying, “Yes, yes, I have family ties on all sides. Chelsea right now. I have a contract for this and one more season.”

The Spanish full-back started his playing days at Real Madrid, where he came through the Spanish club’s youth system, making a solitary senior appearance. That game was against Racing Santander back in April 2010, when Alonso played a single minute of league football in his native Spain.

Also Read: Chelsea and Abramovich in limbo: What do the UK government sanctions mean for the club?

Since then, Alonso has featured for Bolton Wanderers, Fiorentina and now Chelsea. He would certainly have ambitions to test himself in La Liga before the time comes to hang up his boots. However, considering the current scenario at Chelsea, the club may look to keep him until 2023, then let him leave on a free transfer.