You are here: Home » news » Predicted Barcelona lineup against Elche: Fati in for Dembele; de Jong to return
Football News 24/7

Ansu Fati and Frenkie de Jong will likely return in a heavily-rotated Barcelona lineup against Elche at the Spotify Camp Nou on Saturday.

Barcelona will look to bounce back to winning ways after the midweek defeat in the UEFA Champions League when they play hosts to Elche at the Spotify Camp Nou on Saturday afternoon. And Xavi Hernandez barely has an injury concern hampering his preparations ahead of his side’s latest fixture.

Sergi Roberto is the only player unavailable for Barcelona this weekend, with the Spanish utility man missing out on the matchday squad due to an Achilles injury. But Xavi did not speak about Roberto during his pre-match press conference, instead taking the time to impose his faith in Ansu Fati and Ferran Torres.

The Barcelona boss said, “Ansu is fine. He’s a great player and he makes the difference when he comes on. It’s important to us. We may be expecting a little more intensity during the match, but he is gradually coming back, and he understands that is he coming out of a difficult situation.”

“I will decide [about Ansu]. You have to be prudent. Last year, we were maybe too rash with the decision, and it was a problem. I have a lot of confidence in him [Torres]. The other day he made the difference, he’s an important players for the team and for me.”

Judging by Xavi’s comments, Fati and Torres should be a part of Barcelona’s starting lineup on Saturday against Elche, with Robert Lewandowski spearheading the attacking unit. That will also help Ousmane Dembele and Raphinha get a breather after their excursions in the opening month of the season.

Rotation will be the running theme across the starting lineup, and Frenkie de Jong and Franck Kessie will likely earn a spot in the eleven. Kessie and de Jong will join Sergio Busquets in the middle of the park, with Pedri and Gavi dropping to the bench to get some rest. 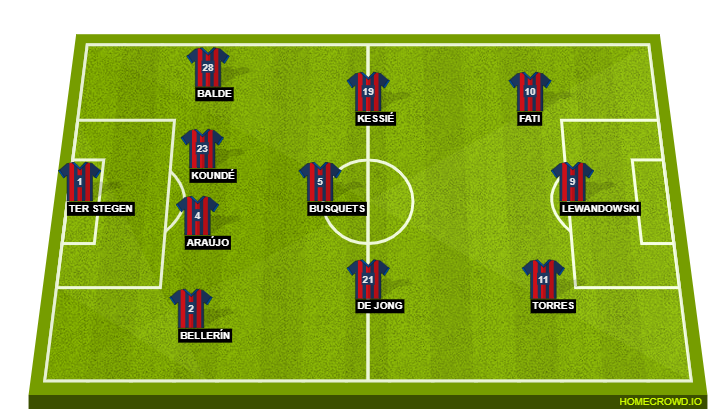 As for the defensive unit, Hector Bellerin will make his second start for Barcelona, with Jules Kounde likely to move into the heart of the backline. Kounde will form the central defensive partnership with Ronald Araujo, with Alejandro Balde expected to replace Marcos Alonso at left-back. Finally, Marc-Andre ter Stegen picks himself between the sticks.

2 Responses to “Predicted Barcelona lineup against Elche: Fati in for Dembele; de Jong to return”