Karim Benzema and Luka Modric will return, but Dani Carvajal will be unavailable when Real Madrid and Levante face off on Thursday.

Real Madrid will look to return to winning ways when they play hosts to Levante at the Santiago Bernabeu on Thursday night. And Carlo Ancelotti will be without two additional first-team members heading into his side’s latest fixture.

Dani Carvajal and Marco Asensio are not a part of the Real Madrid matchday squad, and there is insufficient information about their absence. The Spanish duo has joined Marcelo, David Alaba, Dani Ceballos, Gareth Bale, Isco and Eden Hazard on the sidelines.

During his pre-match press conference, Ancelotti did not provide a team news update but did reveal that the regulars who did not start against Atletico Madrid will be in the eleven versus Levante. The Real Madrid boss also asserted that his players need to retain their “competitiveness” ahead of the UEFA Champions League final against Liverpool.

Ancelotti said, “We spent our time this week preparing for the Levante game. Those who didn’t play against Atlético will need minutes. After that we have another game on Sunday, we’re not preparing for the final. We’re trying to get players back up to full fitness so that they can be right to face Betis. Players like Courtois and Benzema, who didn’t play against Atlético, will be back in action and we’re focussed on this game.”

“If we lose our competitiveness, we’re not going to do well in the Champions League. We’ve got to manage the players’ fatigue and make the most of this time we’ve got so that they’ll be 100% fit. I changed the team around against Atlético. Throughout the year we’ve been talking about how the coach didn’t rotate and now that he is doing, no one is happy. Now’s the right time to give minutes to everyone in order to be at our best on the 28th.”

Courtois will return to the starting lineup, as iterated by Ancelotti, with Real Madrid lining up in a 4-3-3 formation in front of him. But with Carvajal unavailable, Lucas Vazquez will retain his spot as the makeshift right-back. However, Ferland Mendy will return on the left flank, with Nacho moving into the heart of the Real Madrid defence along with Eder Militao.

Up ahead in midfield, Luka Modric will continue the theme of regulars returning to the side. Modric will join Federico Valverde and Casemiro in the middle of the park, with Toni Kroos and Eduardo Camavinga dropping to the bench. 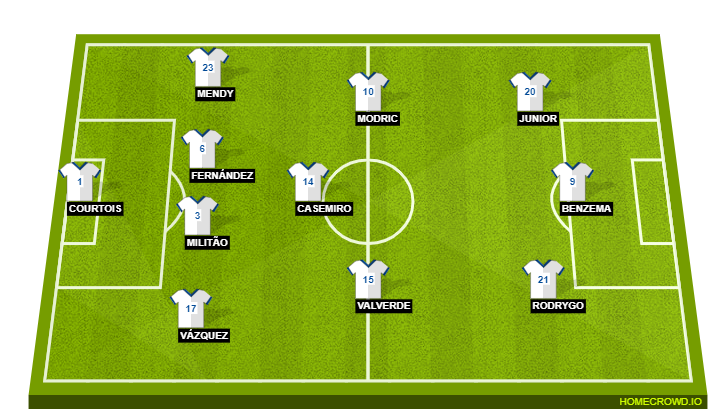 Asensio’s unavailability means Rodrygo Goes picks himself on the right flank. Karim Benzema will spearhead the Real Madrid attack against Levante, with Vinicius Jr. completing the attacking unit on Thursday, leaving Luka Jovic on the bench for the hosts.