Diogo Jota and Naby Keita will return, but Sadio Mane could get some rest when Liverpool and Aston Villa face off at Villa Park on Tuesday.

Liverpool will look to bounce back from a frustrating game against Tottenham Hotspur when they lock horns with Aston Villa at Villa Park on Tuesday night. And Jurgen Klopp has a near full-strength squad at his disposal ahead of his side’s latest fixture.

Roberto Firmino has been training well and could be in contention to feature against Aston Villa. Klopp spoke about the Brazilian international during his pre-match press conference, suggesting he has a chance to make it to the squad.

The Liverpool boss said, “Bobby now trained before the last game [for] two days. We don’t train a lot so he always has to do more, that is what he is still doing. So, [a] decision for tomorrow. He gets closer and closer and closer. Hopefully he can be involved.”

Klopp then spoke about the challenge of keeping his troops fresh in a busy run-in period, and the Liverpool boss said, “Yeah, it’s a challenge, to be honest. But very often the decisions get easier with all the information I get from the medical department because then I don’t have to choose between all of them, I have only a few.”

“In these short periods between the games I didn’t get all the information yet, or not the final information, so when I leave here I go to the medical department and collect some more and then we will see. Is it difficult? It’s challenging, that’s it.”

Firmino will likely be an option on the bench for Liverpool against Aston Villa, with Sadio Mane expected to be a fellow substitute. With Mane in line to get some rest, Diogo Jota will line up alongside Mohamed Salah and Luis Diaz in Liverpool’s offensive unit.

The running theme of the game will be resting some of the regulars, and Jordan Henderson will also drop to the bench, with Naby Keita starting in his stead. Keita will join Fabinho and Thiago Alcantara in the middle of the park. 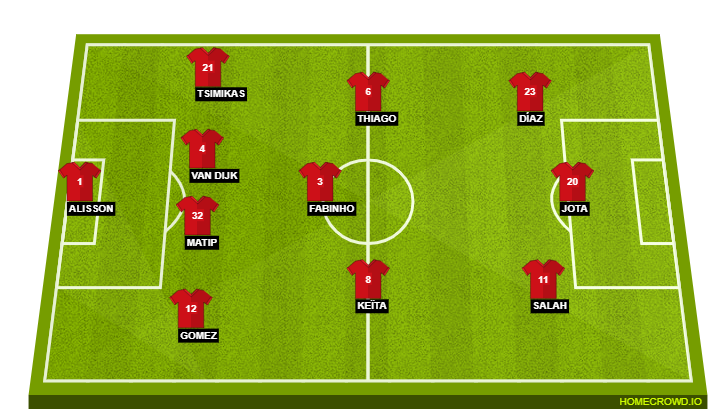 As for the defensive unit, Trent Alexander-Arnold and Andrew Robertson will get preserved for the FA Cup final, with Joe Gomez and Kostas Tsimikas making rare starts on the flanks. Joel Matip will replace Ibrahima Konate to be Virgil van Dijk’s central defensive partner, with Alisson Becker picking himself in the Liverpool goal.