Mason Mount and Jorginho will return to the starting lineup when Chelsea and Brighton & Hove Albion face off at the Amex Stadium on Tuesday.

Chelsea will hope to bounce back to winning ways when they lock horns with Brighton & Hove Albion at the Amex Stadium on Tuesday night. And Thomas Tuchel does not have any fresh roster issues hampering his preparations ahead of his side’s latest fixture.

The Chelsea boss remains bereft of the services of Andreas Christensen (COVID-19), Trevoh Chalobah (hamstring), Ben Chilwell (knee) and Reece James (hamstring), while Edouard Mendy is in Cameroon representing Senegal at the Africa Cup of Nations.

During his pre-match press conference, Tuchel appeared relieved at the unchanged status of his squad with respect to injuries and other availability issues. But the Chelsea boss lamented the timing of the Brighton game at the same time.

“We train later but we have no re-injuries and no new injuries,” said Tuchel. “This is actually the good news but I think nobody is coming back for tomorrow’s game. It’s very hard to understand. Both us and Brighton have our next game on Sunday so there was no need to put it on a Tuesday.”

Despite his issues with the schedule, Tuchel will be glad that he has a strong squad at his disposal. Kepa Arrizabalaga will deputise for Edouard Mendy between the sticks again, with Chelsea likely to line up in a 3-4-2-1 formation.

Malang Sarr has been one of the most impressive performers for Chelsea this month, and the young French defender will form the central defensive partnership alongside Antonio Rudiger and Thiago Silva again.

That means Cesar Azpilicueta will be the right wing-back for a second successive game, with Marcos Alonso starting ahead of Kenedy in the left wing-back slot. The two wing-backs will flank Jorginho and N’Golo Kante, with the former coming into the side in place of Mateo Kovacic, who will get a deserved breather. 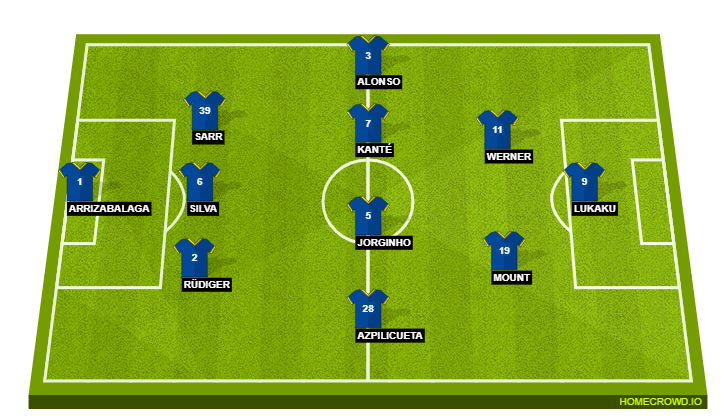 Finally, the attacking unit will see two major changes. Hakim Ziyech and Christian Pulisic failed to impress last time out against Manchester City and will drop to the bench. Mason Mount and Timo Werner were surprise exclusions, and the duo will combine with Romelu Lukaku in the final third. Ziyech, Pulisic and Kai Havertz will be attacking backups.