Alisson and Trent Alexander-Arnold will return, while Kaide Gordon will start again when Liverpool and Arsenal face off at Anfield on Thursday.

Liverpool will aim to move one step closer to clinching a place in the Carabao Cup final when they play hosts to Arsenal at Anfield in the semi-final first leg on Thursday night. And Jurgen Klopp has been handed a double boost on the team news front ahead of his side’s latest fixture.

Alisson Becker and Trent Alexander-Arnold have resumed training after recovering from COVID-19 and will be available to take on Arsenal. The duo’s return leaves Harvey Elliott (ankle), Thiago Alcantara (hip), Nathaniel Phillips (head) and Divock Origi (knee) on the sidelines, while Mohamed Salah, Sadio Mane and Naby Keita are at the Africa Cup of Nations.

Andrew Robertson has shrugged off the heavy knock he sustained in the FA Cup semi-final clash with Shrewsbury Town last weekend and will be at Klopp’s disposal. The Liverpool boss provided a team news update during his pre-match press conference.

Klopp said, “Trent and Ali trained yesterday. Div and Thiago not. That’s it pretty much. Like always in these times, all players, apart from the injured ones or in Africa playing [the] Africa Cup of Nations, who test negative should be available.”

“Harvey Elliott looks really promising, out on the pitch – didn’t train with the team yet but I don’t think we are too far away from team training. What he’s doing in the moment looks really good. Robbo got a little knock in the Shrewsbury game but is fine. I’m not sure if I forgot anybody but the rest are available.”

Klopp also suggested during his presser that Alisson Becker could make his Carabao Cup debut, even though Caoimhin Kelleher is the cup goalkeeper. The Liverpool manager said, “Caoimh is the goalkeeper for this competition but there is a chance Ali will play tomorrow just because of the situation we were in. I think he needs the game now.”

Alisson should thus be stationed between the sticks, with Liverpool lining up in a 4-3-3 formation in front of him. Joel Matip will likely be Virgil van Dijk’s central defensive partner, while Alexander-Arnold and Kostas Tsimikas will be the two full-backs.

Up ahead in midfield, Jordan Henderson will hope to return, with Fabinho retaining his spot at the base. Tyler Morton has been a regular in the cup games, and the talented midfielder will complete the numbers in the middle of the park ahead of Curtis Jones. 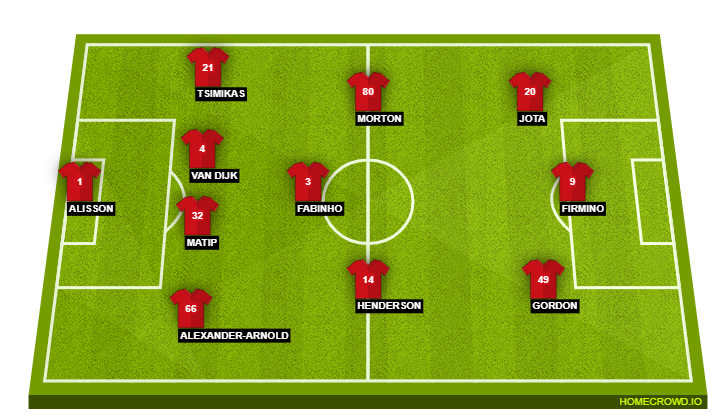 Finally, with Origi unavailable, there is a high chance that Kaide Gordon will get another opportunity to impress. The teenage prodigy will likely line up alongside Roberto Firmino and Diogo Jota, with Takumi Minamino possibly being a surprise omission from the starting lineup.