Charlie Patino will start again, while Kieran Tierney will replace Nuno Tavares when Arsenal and Liverpool face off at Anfield on Thursday.

Arsenal will hope to put one foot in the Carabao Cup final when they lock horns with Liverpool at Anfield in the semi-final first leg on Thursday night. And Mikel Arteta does not have any new fitness issue hampering his preparations ahead of his side’s latest fixture.

The only absentees for Arsenal against Liverpool will be the four players representing their national sides at the Africa Cup of nations, namely Mohamed Elneny, Thomas Partey, Nicolas Pepe and ex-captain Pierre-Emerick Aubameyang. But Arteta is sweating over the fitness of three players, with Takehiro Tomiyasu (calf), Granit Xhaka (COVID-19), and Emile Smith Rowe (groin) minor doubts.

During his pre-match press conference, Arteta did not reveal whether Tomiyasu, Xhaka and Smith Rowe would be available. But the Arsenal manager did provide a general team news update, saying, “It is extremely volatile and uncertain, I don’t know what the situation is that we will have today or if it is different to yesterday. Obviously I cannot get into any detail with that.”

Tomiyasu should be fit enough to start, with the Japanese international resuming his duties as the right-back. At the heart of the Arsenal defence, Ben White will likely have Gabriel Magalhaes as his partner after the Brazilian defender served a suspension this past weekend. As for the left-back slot, Kieran Tierney will come in for Nuno Tavares, a topic of discussion for Areta in his presser.

The Arsenal boss said, “That’s a really personal thing. It’s not what you prepare. It’s something that you don’t certainly train for so I think it comes into the emotional moment and the character of that player.”

Up ahead in midfield, Charlie Patino will likely retain his spot in the starting lineup, with Albert Sambi Lokonga starting alongside him. Xhaka will thus only be an option on the bench at best, with Arteta having no other recognised central midfielder at his disposal. 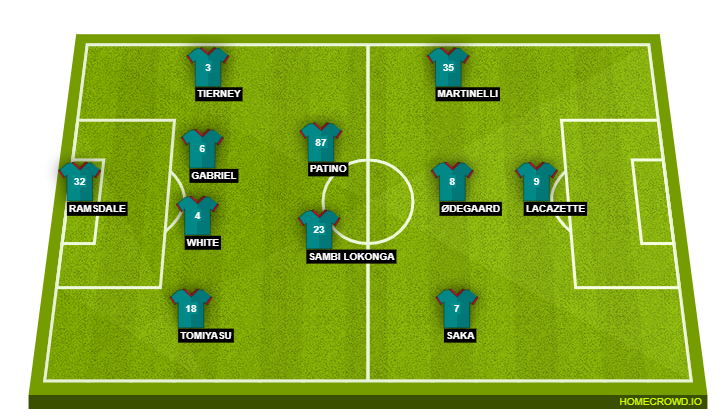 Finally, Alexandre Lacazette will spearhead the Arsenal attack against Liverpool, with Martin Odegaard likely to reprise the no. 10 role. Gabriel Martinelli and Nicolas Pepe should continue as the two wide-attackers, with Smith Rowe a backup option for the Gunners.