Romelu Lukaku and Andreas Christensen should return, but Thiago Silva will miss out when Chelsea and Brighton & Hove Albion face off on Wednesday.

Chelsea will hope to win a third successive domestic game for the first time in weeks when they play hosts to Brighton & Hove Albion at Stamford Bridge on Wednesday. And Thomas Tuchel has greeted a mixed bag of updates on the team news front ahead of his side’s latest fixture.

The good news is that N’Golo Kante is fit and available despite sustaining a knock on his knee this past weekend against Aston Villa. In addition, Kai Havertz has resumed training while Ruben Loftus-Cheek is in contention to feature. So, only three players are likely to be unavailable when Chelsea and Brighton face off on Wednesday.

Thiago Silva is the latest player to be sidelined after picking up a hamstring injury on Boxing Day. In addition, Timo Werner’s status remains a mystery, with the German international unlikely to feature against Brighton. Finally, Ben Chilwell is a long-term absentee, with his campaign brought to a premature end as he has to undergo knee surgery, as revealed by Chelsea on Tuesday.

In his pre-match conference, Tuchel did not reveal any team news updates but spoke about the dire situation borne out of the latest coronavirus outbreak in England. The Chelsea boss said, “We have infected people who have three vaccinations, we have infected players without vaccination, so we have everything.”

“If you just speak about central midfield, let’s assume that maybe N’Golo is out [of the Brighton game], maybe Ruben is still out, so one [positive] test in central midfield is enough for the thing to collapse again, because then Kova will play again 90 minutes but from where, from out of nothing, and you risk injuries. This is what we do at the moment. I cannot see how we are out of Covid threat at the moment as it does not feel like it.”

Kante is unlikely to start despite taking part in training on Tuesday. Instead, Mateo Kovacic and Jorginho will form the double-pivot in midfield. Reece James and Marcos Alonso will continue as the two wing-backs due to a lack of alternatives.

At the back, Andreas Christensen should replace Thiago Silva in the central defensive partnership. The Dane will be partnered by Cesar Azpilicueta and Antonio Rudiger, with Edouard Mendy taking his usual place in the Chelsea goal. 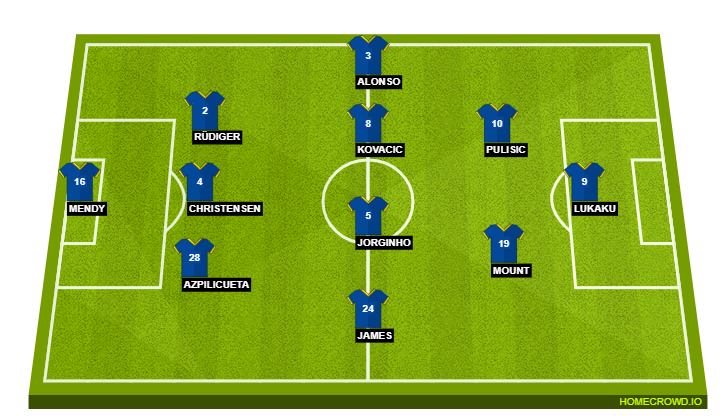 At the opposite end of the pitch, Romelu Lukaku should return to the starting lineup to spearhead the Chelsea attack. Mason Mount and Christian Pulisic will likely supplement Lukaku, leaving Callum Hudson-Odoi, Kai Havertz and Hakim Ziyech as backup options.