Diogo Jota is a major doubt, but Trent Alexander-Arnold and Andrew Robertson will return when Liverpool and Aston Villa face off on Saturday.

Liverpool will hope to keep pace with Manchester City at the top of the Premier League table when they play hosts to Aston Villa at Anfield on Saturday afternoon. And Jurgen Klopp has a new roster issue to deal with ahead of his side’s latest fixture.

In particular, the Liverpool boss is sweating over the fitness of Diogo Jota, who is recovering from a knock that forced him to miss the UEFA Champions League tie with AC Milan earlier this week. In addition, Nathaniel Phillips sustained a head injury in the midweek contest and has joined Curtis Jones (eyes), Harvey Elliott (ankle) and Roberto Firmino (hamstring) on the sidelines.

In his pre-match press conference, Klopp addressed questions over Jota’s availability and confirmed that Divock Origi is fit and available after missing training on Thursday. The Liverpool boss said, “Diogo felt something after the last Premier League game and he didn’t train yet.”

“We will see, maybe he can train today and then he is an option and if not, then not. Divock was just intensity, we took him out for a day, extra recovery day, and I think he will be fine for tomorrow. I didn’t hear anything different.”

Origi’s availability is a major boost for Klopp, especially with the Belgian striker scoring the match-winning goals against Wolverhampton Wanderers and AC Milan in the past week. Origi will spearhead the Liverpool attack, lining up alongside Mohamed Salah and Sadio Mane in the final third.

The rest of the starting lineup will be rotated entirely, except in the goalkeeping slot, with Alisson Becker a certainty between the sticks. In front of Liverpool’s no. 1, Virgil van Dijk, Joel Matip, Andrew Robertson and Trent Alexander-Arnold will return in the back four.

Matip and van Dijk will form the central defensive partnership, while Alexander-Arnold and Robertson will be the two full-backs. Phillips, Ibrahima Konate, Neco Williams and Kostas Tsimikas will make way for the first-choice defensive quartet. 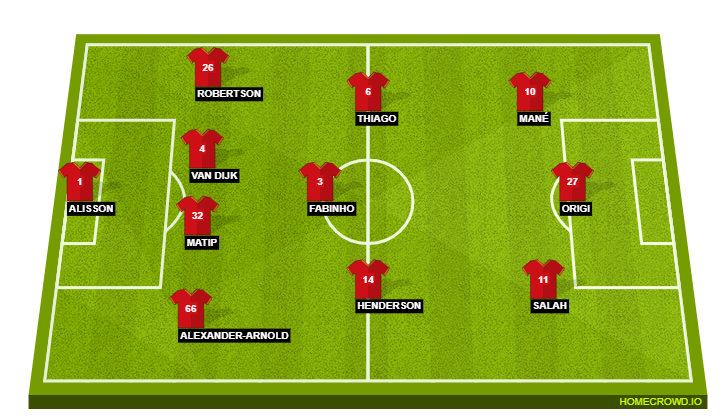 Finally, in the midfield unit, Jordan Henderson, Fabinho, and Thiago Alcantara will be back in the starting eleven, with Tyler Morton, Alex Oxlade-Chamberlain and Takumi Minamino dropping to the bench.