Sadio Mane and Thiago Alcantara will return while Roberto Firmino will miss out when Liverpool welcome Crystal Palace to Anfield on Saturday.

Liverpool will have the chance to climb to the top of the Premier League standings when they play hosts to Crystal Palace at Anfield on Saturday afternoon. And Jurgen Klopp does not have any fresh pressing concern to contend with ahead of his side’s latest fixture.

Roberto Firmino remains the only major absentee for Liverpool, as he continues to recover from a hamstring issue. Another big player missing for the Reds is Harvey Elliott, after he sustained an ankle injury last week against Leeds United while Divock Origi is a doubt after picking up a knock earlier in the week versus AC Milan.

During his pre-match press conference, Klopp was asked to comment on the situation of Firmino ahead of the visit of Crystal Palace. The Liverpool boss was also quizzed about the prospect of quick turnovers between games following the beginning of their campaign in Europe.

“We spoke a lot of the schedule and stuff like this but this [having three games a week] is normal for us. But the Sunday-Wednesday-Saturday thing is a tough one and the shortest one you can get in a normal week. You have to think about these kind of things. We did that [for the Milan game] and thank God we came through.”

“I really thought the boys did really well and we will have to make changes again, that’s clear. He’s not ready. Bobby didn’t even start training with the team. It will happen at some point next week, he will be back in training and then we will see.”

Firmino’s continued absence coupled with the doubts surrounding the availability of Origi means Sadio Mane is a certainty to return to the starting lineup, with Diogo Jota and Mohamed Salah being his attacking partners. Jota will be deployed centrally while Mane and Salah will be the two wide men.

In midfield, the absence of Elliott could prompt the return of Thiago Alcantara, especially keeping the quick turnover between games in mind, which essentially rules Naby Keita out as a starter. Thiago will have Jordan Henderson and Fabinho as his partners in the middle of the park. 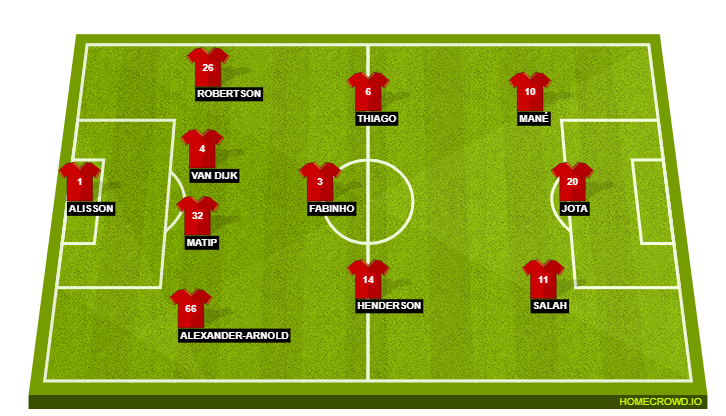 The only other change to the starting lineup will bring Virgil van Dijk back into the starting lineup, with Joe Gomez making way. There is a sense that Ibrahima Konate could come in for Joel Matip, but the Frenchman is only likely to make his Liverpool debut in the midweek cup fixture. Finally, Andrew Robertson and Trent Alexander-Arnold will be the two full-backs, with Alisson Becker picking himself in goal.