Manchester United will be hoping to continue their unbeaten start to the 2021/22 season when they begin their UEFA Champions League campaign against BSC Young Boys at the Wankdorf Stadium on Tuesday night. And Ole Gunnar Solskjaer does not have a fresh injury concern to deal with ahead of his side’s latest fixture.

The likes of Dean Henderson, Alex Telles, Phil Jones, Scott McTominay and Marcus Rashford remain unavailable due to their respective injuries. In addition, Edinson Cavani is not a part of the travelling squad either, as he is recovering from a knock that forced him to miss out against Newcastle United as well on the weekend.

During his pre-match press conference, though, Solskjaer largely spoke about the way his squad is developing. The Manchester United boss first commented on the prospect of facing their conquerors in the UEFA Europa League final last season, Villarreal, later on in the group stage before hailing the group he has at his disposal.

“We’ve had enough disappointments. That’s for sure. This team now has matured and grown. I have to say, that was always the plan when I came in. With players like David [De Gea], Harry [Maguire] has had a couple of years now.”

“We have a spine in the team. With Raphael [Varane] and Cristiano [Ronaldo], they added something extra you have to buy unless you win it four times yourselves. We’ve definitely learned. The group is special. They look after each other and we’re in good stead.”

As for the team selection on Tuesday against Young Boys, de Gea is a certainty following a strong start to the season as well as the fact that Henderson is unavailable. In front of the Spaniard, Manchester United will line up in a 4-2-3-1 formation, with the defensive line unlikely to be tinkered with.

So, Harry Maguire and Raphael Varane will once again pair up at the heart of the Manchester United defence, with Luke Shaw and Aaron Wan-Bissaka continuing as the full-backs. The first and only change to the starting lineup will likely come in midfield, with Fred expected to replace Nemanja Matic.

Fred will pair up with Paul Pogba in the double pivot, especially with McTominay still on the road to recovery. So, that essentially means Jadon Sancho will get another chance to impress on the left flank, with Bruno Fernandes and Mason Greenwood being automatic picks. 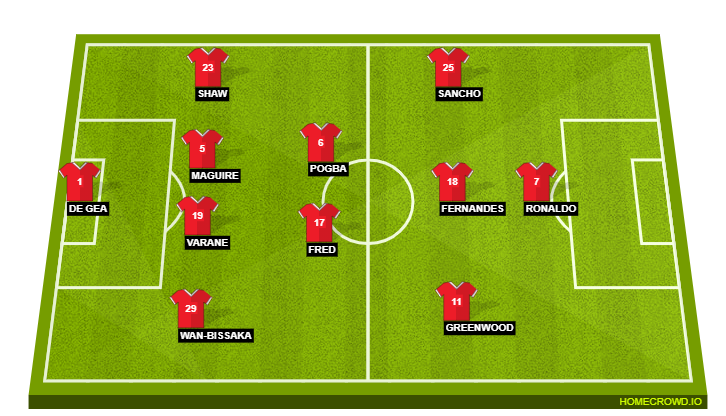 As for the central striker’s berth, as iterated earlier, Cavani is unavailable and Solskjaer did briefly speak on the extent of his injury. The Manchester United boss said, “He had a slight strain during the international week after the in-house game we played. He is hopefully back with us soon. He’s working hard to get back.”

With Cavani not fit to face Young Boys, Cristiano Ronaldo becomes a certainty to lead the line for Manchester United, although he was likely to do that anyway in the wake of a stunning second debut against Newcastle United on the weekend. Anthony Martial, meanwhile, will be an option on the bench along with Jesse Lingard.