Arsenal have entered the race to sign Takehiro Tomiyasu of Bologna, whose agents are keen on sanctioning a move to Premier League.

According to Corriere Dello Sport, as relayed by Sport Witness, Arsenal are ready to hijack Tottenham Hotspur’s deal to sign Takehiro Tomiyasu. The Lilywhites were in pole position to secure the services of the Bologna centre-back, but the club is slowly backing away from the deal.

It appears the impending arrival of Cristian Romero is having a major impact on Spurs’ desire to sign Tomiyasu. It has opened the door for Arsenal to make a fresh approach for the talented defender, whose agents are intent on helping him seal a move to the Premier League this summer. The player is not averse to prolonging his stay at Bologna, but he does prefer a move to England over remaining in Italy.

A native of Japan, Tomiyasu has enjoyed a rapid rise to prominence since his move to Serie A in 2019. He has notched up 63 competitive appearances for Bologna in just two years, establishing himself as one of the best defensive talents in the Italian top-flight.

His physical and aerial prowess have also made the 22-year-old one of Japan’s main footballing prospects. The player is now hoping to earn a move to the Premier League that may further increase his reputation, with Arsenal seemingly emerging as a potential destination. 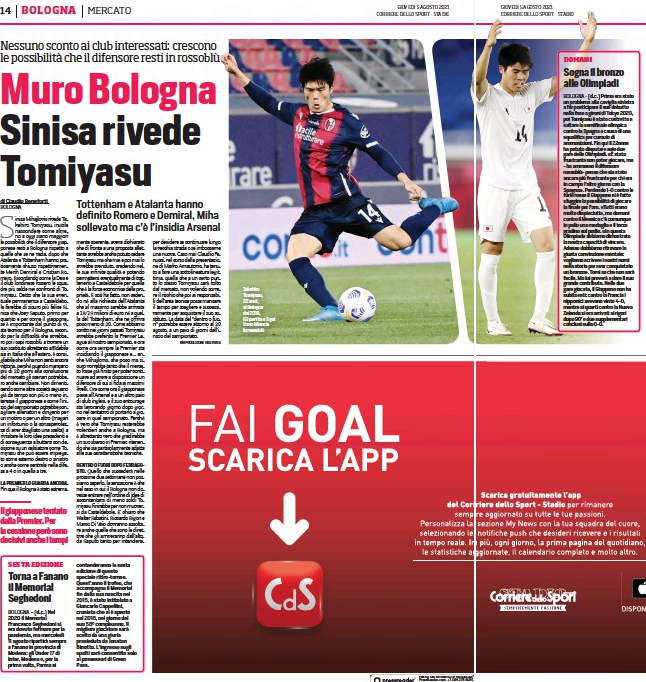 Coming on the back of a disappointing 2020/21 campaign, the Gunners are in for a major shakeup in the defensive unit this summer. They have already roped in one of England’s finest talents in Ben White. However, with questions being raised over the individual quality of players like Rob Holding and Calum Chambers, Mikel Arteta could be eyeing another centre-back.

Tomiyasu might be an ideal fit due to his imposing physical frame and dogged defensive nature, making him a potential replacement for Sokratis. In addition, the fact that Tomiyasu can easily play at right-back could also be a factor in Arsenal’s pursuit of him considering Hector Bellerin is staring at an uncertain future at the Emirates Stadium.

The move to Tottenham is also on the table for the Japanese international, identified as an alternative for the underperforming defensive duo of Eric Dier and Davinson Sanchez. He could also be seen as a replacement for exit-bound right-back Serge Aurier.

Contrary to what the report suggests, the Lilywhites may be tempted to make a move for Tomiyasu due to his slender price tag. They were linked with a £15 million move for the Bologna centre-back only last month, so it won’t be surprising to see Fabio Paratici dumping some extra cash in order to secure the services of one of his favoured options in the market, in addition to signing Romero.