Liverpool have reportedly emerged as a shock late contender in pursuit of Arsenal target Manuel Locatelli this summer.

According to the print edition of Gazzetta Dello Sport, as relayed by Football-Italia, Liverpool are preparing a last-gasp effort to sign Manuel Locatelli. The US Sassuolo midfielder has emerged as the latest option for Jurgen Klopp as he desperately looks for reinforcements in the middle of the park.

A star for Italy at UEFA Euro 2020, Locatelli is highly courted by Arsenal, although the Italian has snubbed a move to the Emirates in favour of a switch to Juventus, due to his desire to play in the UEFA Champions League, but with the Bianconeri failing to meet Sassuolo’s €40 million demands, it has paved the way for Liverpool to make an approach.

There is no secret that the Reds are in the market for new midfielders, having lost Georginio Wijnaldum to Paris Saint-Germain. It has created a massive void in Liverpool’s midfield department, whereas other options like Alex-Oxlade Chamberlain and Naby Keita have both failed to step up their game.

Oxlade-Chamberlain is already a target for other clubs including West Ham United. It has forced Klopp to desperately look for new faces in the market, with Locatelli now appearing as the latest target. 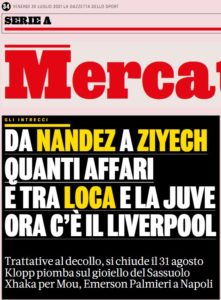 The Sassuolo starlet is currently one of the most in-demand players available in the market. He has enjoyed immense success under the leadership of Roberto De Zerbi, establishing himself as one of Italy’s finest. His performances for the Azzurri in Euro 2020 further helped his cause.

As a result, a move to Liverpool is now a possibility for the ex-AC Milan prodigy. But Arsenal won’t be going down without a fight, even though their lack of participation in European football makes them undesirables. The Gunners were even weighing up a fresh bid for the Italian international of around €40 million, which matches Sassuolo’s demands.

Arsenal can afford to offer him a significantly more lucrative contract as well, given the fact that they have already lost key midfielders like Dani Ceballos and Martin Odegaard while Matteo Guendouzi has recently moved to Marseille.

Another thing that might play in Arsenal’s favour is Liverpool’s desire to sign a more attack-minded midfielder. In Fabinho, Jordan Henderson and Thiago, Klopp already has a solid base in the holding midfield position, which is also why the club has appeared more interested in striking a deal with Atletico Madrid for Saul Niguez.