Sadio Mane will replace Diogo Jota while Rhys Williams will retain his place in defence when Liverpool take on West Bromwich Albion on Sunday.

Liverpool will have the chance to close the gap to fourth-placed Chelsea to just one point when they lock horns with West Bromwich Albion at the Hawthorns on Sunday evening. And, Jurgen Klopp does not have any fresh injury concerns to deal with ahead of his side’s latest fixture.

During his pre-match press conference, Klopp was asked about the general fitness situation in his squad and the Liverpool manager said, “I think so. It’s pretty early after the game, we came home last night pretty late. So far I heard nothing about main problems.”

In particular, though, Klopp has had words of praise for young central defensive duo of Nathaniel Phillips and Rhys Williams. Speaking to the Liverpool media, Klopp said, “First and foremost, the boys did incredibly well. Now they played together, did really well [on Thursday] night, I loved what they did. That’s good. So, this year created obviously two proper careers, which is nice.”

Both Williams and Phillips should pair up at the heart of the Liverpool defence once again, with Kabak still on the sidelines. Out wide, Trent Alexander-Arnold and Andrew Robertson are certain to reprise their roles as the two full-backs, with Alisson Becker picking himself in goal.

Up ahead in midfield, Fabinho will crucially essay his favoured holding midfield role once again, with defensive support coming from Thiago Alcantara and Georginio Wijnaldum. Therefore, Curtis Jones misses out once again, with the youngster being an option off the bench. 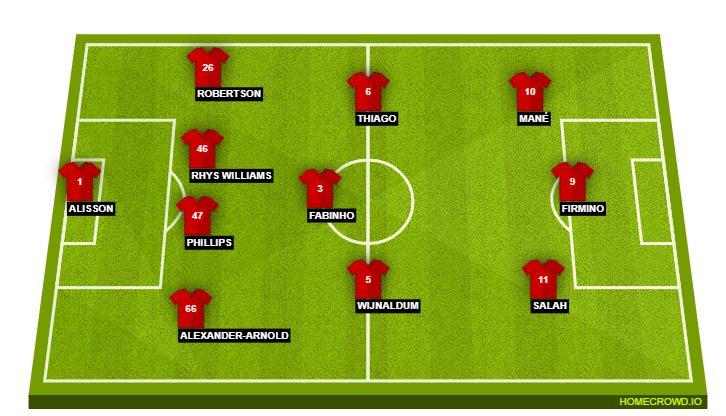 Finally, in attack, the big decision will once again concern who among Sadio Mane, Diogo Jota, Mohamed Salah and Roberto Firmino misses the cut. Salah and Firmino are automatic picks after their exploits against Manchester United, meaning the final choice will be between Mane and Jota, with the former likely to get the nod on the left flank.