Mohamed Salah is set to return while Curtis Jones will be in contention to feature when Liverpool welcome Newcastle United to Anfield on Saturday.

Liverpool will be aiming to get their pursuit for a top four finish back on track when they play hosts to Newcastle United at Anfield on Saturday afternoon. And, Jurgen Klopp has been handed a boost on the team news front ahead of his side’s latest fixture.

Curtis Jones is fit and available after recovering from a knock that had kept him on the sidelines for the last three games. In addition, Diogo Jota is also at Klopp’s disposal after it was initially feared that he would miss the visit of Newcastle as he supposedly missed training on Thursday.

However, Nathaniel Phillips remains unavailable due to a hamstring injury that had forced him to miss the game against Leeds United earlier this week. Apart from the 24-year-old, the likes of Virgil van Dijk, Joel Matip, Joe Gomez, Caoimhin Kelleher, Divock Origi and captain Jordan Henderson also miss out. And during his pre-match press conference, Klopp provided all the updates.

The Liverpool boss said, “No, Nat Phillips is not back. Curtis is back, yeah, that’s true. Diogo is fine. Not really, I don’t know [when Henderson would return]. Nobody told me, so it’s for sure not in the next couple of weeks.”

With Phillips still on the sidelines, Fabinho will once again pair up with Ozan Kabak at the heart of the Liverpool defence, with Andrew Robertson and Trent Alexander-Arnold continuing as the two full-backs. In goal, there is no looking past Alisson Becker.

Jones ought to be in contention to feature later on in the game, but is unlikely to make the starting lineup against Newcastle. The three-man midfield unit featuring Georginio Wijnaldum, James Milner and Thiago Alcantara should, therefore, continue, with Thiago sitting at the base of the unit, while Wijnaldum and Milner will be the box-to-box midfielders. 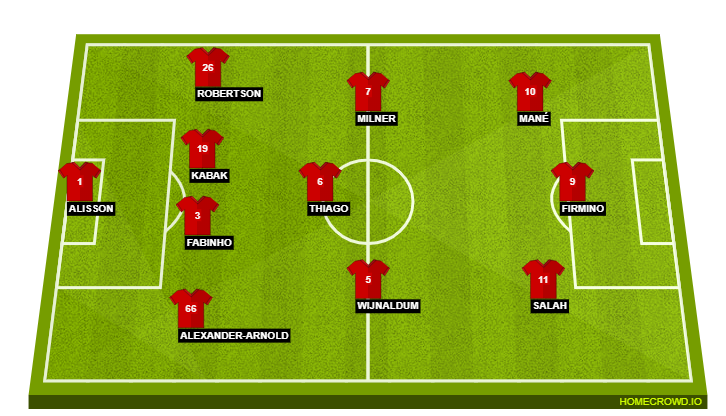 Finally, in attack, Jota could be the one missing out this time around, even though he is fit and available. In his stead, Mohamed Salah should return to the attacking unit, starting on the right flank, with Sadio Mane taking his place on the left wing. Roberto Firmino will reprise his usual false nine role.