Toni Kroos will return, but Marco Asensio could be benched when Real Madrid face Liverpool in the UEFA Champions League quarter-final on Tuesday.

Real Madrid will hope to take a step towards the UEFA Champions League semi-finals when they play hosts to Liverpool in the quarter-final first leg at Estadio Alfredo Di Stefano on Tuesday. And, Zinedine Zidane has been handed a boost on the team news front ahead of his side’s latest fixture.

While Sergio Ramos remains on the sidelines and will miss both the legs against Liverpool, the Real Madrid boss has welcomed Federico Valverde in the matchday squad. Dani Carvajal and Eden Hazard, though, miss out, even though they are not on the sidelines anymore, suggesting Zidane will only ease them back into the thick of action.

During his pre-match press conference, Zidane was quizzed on Hazard’s availability and the Real Madrid manager said, “The important thing is that he’s at ease with his return and that he’s fully recovered.”

“I don’t think he was rushed back the other day because the player felt good. We never take risks. If the player is fit, I want him with the team. What we’re going to take things gradually and we’ll see when Eden is ready to be with us, but for the moment this is the situation.”

Hazard’s absence might not hurt Real Madrid much, especially considering the form of Vinicius Jr. and Marco Asensio, who have supported Karim Benzema ably of late. Asensio, though, will likely be benched, with Zidane likely to alter his formation slightly, changing from 3-4-3 to a 3-5-2, meaning Vinicius and Benzema will form the strike partnership.

The change in formation is entirely due to the much-anticipated return of Toni Kroos, who will be a part of the three-man midfield unit alongside Luka Modric and Casemiro. Valverde will, therefore, be an option off the bench for Real Madrid along with Isco. 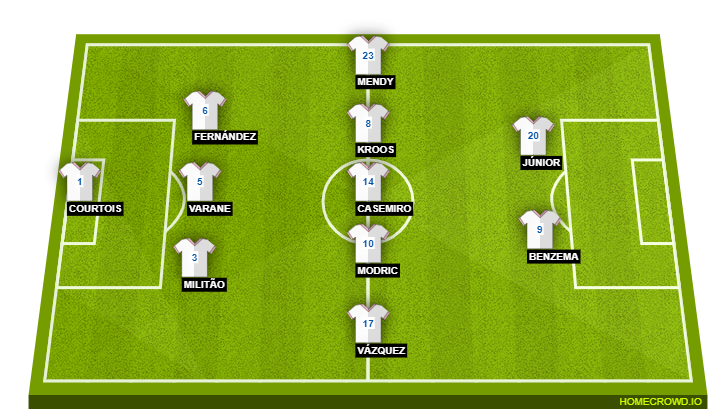 As for the defence, Raphael Varane is set to return after being rested on the weekend against Eibar. The Frenchman’s return will mean that Ferland Mendy will get freed up to start as the left wing-back, with Lucas Vazquez taking his place on the right flank once again. Meanwhile, Varane will be accompanied by Nacho and Eder Militao in the back three, with Thibaut Courtois starting in goal.