Ronald Araujo will replace Frenkie de Jong while Gerard Pique will be in contention to feature when Barcelona welcome Real Valladolid to Camp Nou on Monday.

Barcelona will be aiming to cut the gap to La Liga leaders Atletico Madrid to just one point when they play hosts to Real Valladolid at Camp Nou on Monday night. And, Ronald Koeman has been handed a double boost on the team news front ahead of his side’s latest fixture.

Gerard Pique and Sergi Roberto have both resumed training this week and will be in contention to feature for Barcelona against Real Valladolid. However, the likes of Neto, Philippe Coutinho and Ansu Fati remain on the sidelines. During his pre-match press conference, Koeman spoke about the fit-again duo of Pique and Roberto.

The Barcelona manager said (h/t Barca Universal), “Pique and Sergi Roberto are training with the group, they have improved a lot. Whether or not they’ll enter tomorrow’s squad, will be decided tomorrow.”

However, there have been suggestions made by Mundo Deportivo that Pique could be preserved for the crucial El Clasico on the weekend, meaning he will miss out against Real Valladolid. Frenkie de Jong could also be safeguarded ahead of the meeting with Real Madrid, with the Dutchman just one booking away from being suspended.

In his stead, Ronald Araujo should start, taking his place at the centre of the three-man central defensive unit, with Barcelona set to line up in the 3-4-3 formation again. Araujo will have Oscar Mingueza and Clement Lenglet for company in the back three, with Marc-Andre ter Stegen a certain starter in goal.

As for the two wing-backs, there is no looking past Sergino Dest and Jordi Alba, meaning Roberto and Junior Firpo miss out. In the middle of the park, Sergio Busquets will pair up with Pedri, with Miralem Pjanic being a backup option on the bench. As for attack, Lionel Messi is in a similar predicament as de Jong, and Koeman was quizzed about possibly resting the Barcelona captain. 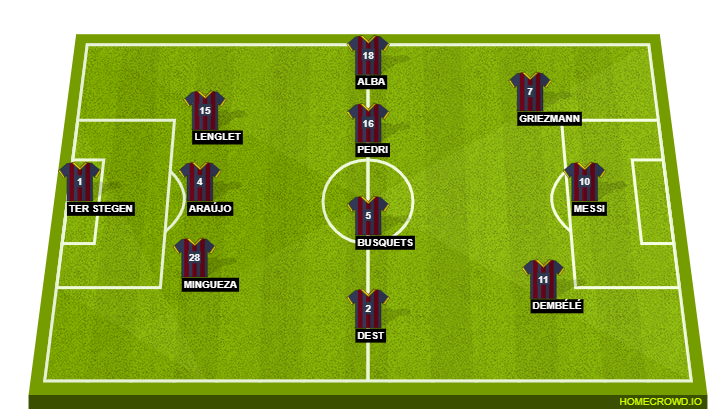 “We know that Messi and De Jong are close to suspension, but I don’t think it’s time to rest, there are 10 games remaining. The risk always exists, but the players must keep that in mind. I have to put the best team I believe in tomorrow.”

Despite Koeman’s comments, it is likely that de Jong will be rested, but Messi should start in the attacking trio, with Antoine Griezmann and Ousmane Dembele being his partners. Francisco Trincao and Martin Braithwaite will be attacking backups for Barcelona.