Casemiro is set to replace Federico Valverde while Sergio Ramos misses out when Real Madrid take on Celta Vigo at Balaidos on Saturday.

Real Madrid will be hoping to continue their recent unbeaten run when they lock horns with Celta Vigo at Balaidos on Saturday evening. And, Zinedine Zidane has another key player on the sidelines ahead of his side’s latest fixture.

While the likes of Dani Carvajal, Alvaro Odriozola, Eden Hazard and Mariano Diaz continue to be unavailable, Sergio Ramos also misses out after being omitted from the squad as a precautionary measure. While Zidane did not comment on the absence of the Real Madrid captain, he did speak about Hazard’s latest injury during his pre-match press conference.

The Real Madrid boss said, “We want him to properly recover. That’s what’s most important right now. He’s not going to undergo surgery, we have a different plan. Everyone here is doing their best to ensure that he recovers properly and returns in the best shape.”

In the absence of Ramos, Real Madrid should revert to the 4-3-3, with Nacho and Raphael Varane pairing up at the heart of the defence. In the right-back slot, Lucas Vazquez is a certain starter due to the fact that both Carvajal and Odriozola remain unavailable. On the opposite flank, Ferland Mendy picks himself ahead of Marcelo.

Up ahead in midfield, Casemiro is back in the matchday squad after having been unavailable due to a suspension in the midweek UEFA Champions League fixture against Atalanta. The Brazilian will come into the side in place of Federico Valverde to sit at the base of the three-man midfield unit, with Toni Kroos and Luka Modric giving him company in the middle of the park. 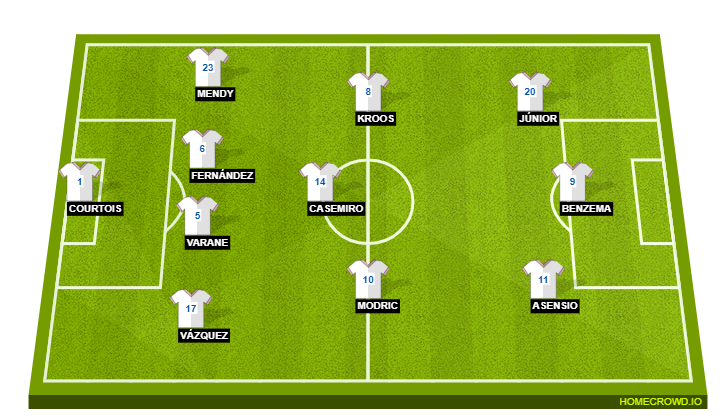 Finally, in attack, Vinicius Jr. ought to have nailed down his place following an impressive showing in Europe versus Atalanta. Karim Benzema is an automatic pick as well to lead the line for Real Madrid against Celta Vigo, with the Frenchman set to don the captain’s armband in the absence of Ramos. The final spot in the side should be taken up by Marco Asensio, who pips Rodrygo Goes to the right-wing berth.