Real Madrid will aim to keep up the pressure on Atletico Madrid and Barcelona when they take on Celta Vigo at Balaidos on Saturday.

The international break is nearly upon us, but before that, there is some business to be conducted. In Spain, Matchday 28 of the 2020/21 La Liga season will be played this season and on Saturday, defending champions Real Madrid will aim to continue their unbeaten run when they lock horns with Celta Vigo at Balaidos.

Celta Vigo have enjoyed a much more memorable league campaign this term than they have in the last couple of seasons or so. In fact, the Sky Blues would fancy their chances of achieving a top-half finish, having steered clear of the relegation zone in recent weeks. Indeed, Eduardo Coudet & co. have lost just one of their last eight games.

Real Madrid, on the other hand, are finally starting to find some sort of stable footing, despite what is happening off the pitch with respect to the renewals of certain players. Los Blancos, third in La Liga, are currently on a nine-game unbeaten run and come into this fixture on the back of a 3-1 win over Atalanta in the UEFA Champions League, which sent them through to the quarter-finals.

The reverse fixture, played at the Alfredo Di Stefano Stadium back in January, saw Real Madrid eke out a 2-0 win over Celta Vigo, courtesy of goals from Lucas Vazquez and Marco Asensio. Ahead of the latest meeting between the two sides, The Hard Tackle takes a closer look at the encounter.

Eduardo Coudet has been handed a fresh boost on the team news front ahead of the visit of Real Madrid. On Saturday, the Celta Vigo manager will only be bereft of the services of three first-team players, with one squad member returning to his disposal.

Hugo Mallo is available again after serving a one-match ban and should be reinstated into the starting lineup straightaway. The Celta Vigo captain will come in for Kevin Vazquez in the right-back slot. However, the likes of Ruben Blanco (knee), Sergio Alvarez (ACL) and Emre Mor (knock) remain on the sidelines ahead of the game against Real Madrid.

The absence of Blanco and Alvarez means Ivan Villar will take his place in goal, with Celta Vigo set to line up in a 4-4-2 formation versus Real Madrid. In front of him, Mallo will be joined by Aaron Martin in the full-back pairing, whereas Nestor Araujo and Jeison Murillo will partner up at the heart of the backline.

Up ahead in midfield, Renato Tapia will have the responsibility of keeping Toni Kroos and Luka Modric quiet, with Denis Suarez pulling the strings whenever Celta Vigo are afforded time on the ball. Out wide, Nolito and Brais Mendez will aim to run at the Real Madrid full-backs, while lining up in the second bank of four in the defensive phase.

The onus, though, will be on talisman Iago Aspas to do much of the heavy lifting higher up the pitch. The veteran Spanish forward will have Santi Mina as his strike partner, with the 25-year-old taking up scoring positions deep into the Real Madrid box. 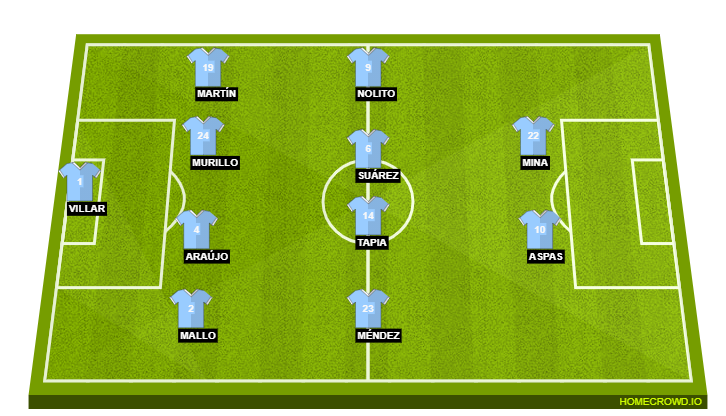 Like his counterpart in the Celta Vigo dugout, Zinedine Zidane does not have any fresh injury concerns hampering his preparations ahead of the trip to Balaidos. On Saturday, the Real Madrid boss will have to make do without four first-team players.

The major absentee continues to be Eden Hazard, whose fitness woes just do not seem to have an end. Apart from the Belgian winger, Dani Carvajal is another key player missing, with Alvaro Odriozola and Mariano Diaz also out for Real Madrid.

In the continued absence of Carvajal and Odriozola, Lucas Vazquez is the only viable option to play as the right-back and the Spanish international will continue in the lineup. On the opposite flank, Ferland Mendy is an automatic pick and so are Sergio Ramos and Raphael Varane at the heart of the Real Madrid defence, which will protect Thibaut Courtois.

Up ahead in midfield, Casemiro is available after missing in the midweek European fixture due to a suspension. The Brazilian international will line up in the three-man unit, where he will have Toni Kroos and Luka Modric for company. Finally, in attack, Karim Benzema will lead the line for Real Madrid, with Vinicius Jr. and Marco Asensio likely to be the two wide men. 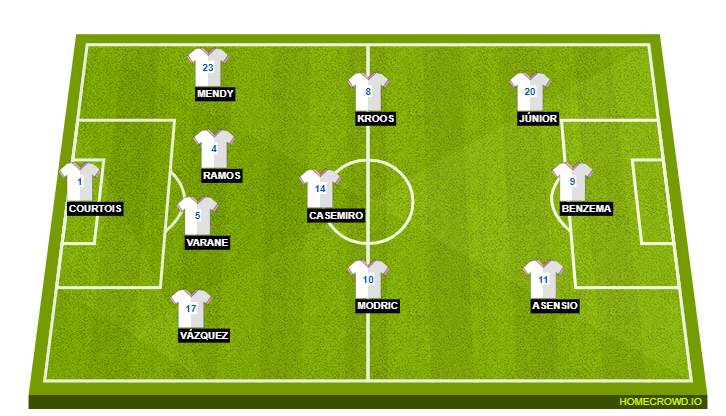 Karim Benzema is once again the man in form for Real Madrid in the final third, but the French striker is having to do a lot of the heavy lifting all by himself. And, with Vinicius Jr. and Rodrygo Goes still managing to impress in fits and parts, it is high time that Marco Asensio steps up and does so in a big way.

With his injury horror well behind him, Asensio really ought to retrace his steps back to a couple of years ago, when he outplayed Barcelona all on his own in the Spanish Super Cup and showed the potential to become a world-beater. That player has been nowhere to be seen of late and with rumours of a possible summer exit surfacing, Asensio has to start delivering the goods.

This is one of those potential banana skin fixtures for Real Madrid, who are still hopeful of winning the La Liga title for a second successive year. But, while Celta Vigo will make things difficult for Los Blancos, the visitors should have more than enough firepower to grab all three points by the narrowest of margins. To that end, The Hard Tackle predicts a 2-1 win for Zinedine Zidane & co.