Mateo Kovacic is set to return, but Jorginho and Mason Mount miss out due to suspension when Chelsea face Atletico Madrid on Wednesday.

Chelsea will be aiming to book their place in the UEFA Champions League quarter-finals when they play hosts to Atletico Madrid at Stamford Bridge in the round of 16 second leg on Wednesday night. And, Thomas Tuchel has a couple of fresh roster issues to deal with ahead of his side’s latest fixture.

While Thiago Silva (thigh) and Tammy Abraham (ankle) remain unavailable due to their respective injuries, Jorginho and Mason Mount also miss out due to a suspension. Tuchel was quizzed about the quartet during his pre-match press conference.

“We have no fresh injuries but we are are without two key players for us tomorrow in Mount and Jorginho. Especially with Mason for his offensive skills and his power to break the lines with strong dribbling and his shots. Atletico are one of the best teams in Europe for not giving shooting chances away, so of course it’s a blow to miss an offensive player for a game such as this one.”

“We also need to work without Thiago Silva and Tammy Abraham for this game. They are not quite right yet but with an international break now coming, I don’t think there is too much risk in me saying that we expect them to join us again after the international break. So we are missing four key players for this game but that makes the selection a little bit easier, because we can select 23 players in the Champions League.”

In Silva’s continued absence, Andreas Christensen will continue at the heart of Chelsea’s three-man central defensive unit, with Antonio Rudiger and captain Cesar Azpilicueta starting alongside him. In goal, there is no looking past Edouard Mendy.

Up ahead in midfield, Mateo Kovacic becomes an automatic pick in the absence of Jorginho, with N’Golo Kante being his partner in the middle of the park. Out wide, Reece James and Marcos Alonso ought to come in for Christian Pulisic and Ben Chilwell. 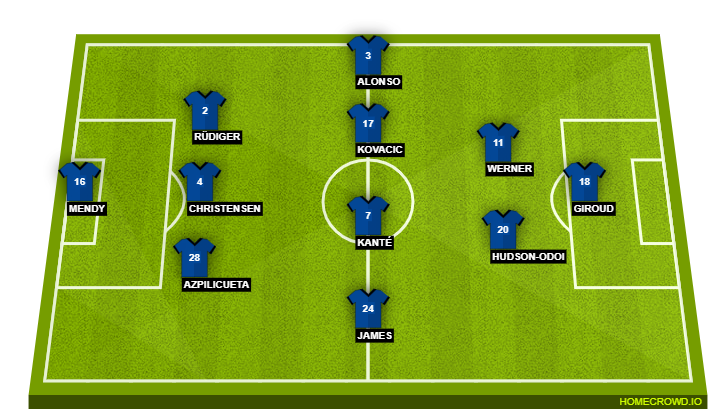 As for the attack, one of the changes will be forced due to the absence of Mount, with Timo Werner likely to start in his stead. Olivier Giroud should be handed a starting berth as well following his exploits in the first leg, with Callum Hudson-Odoi taking up the final spot in the side – Hakim Ziyech making way.

One Response to “Predicted Chelsea lineup against Atletico Madrid: Kovacic in for Jorginho; Mount suspended”