Roberto Firmino is in contention to feature while Fabinho will play in midfield again when Liverpool take on Wolves on Monday.

Liverpool will be desperate to get back to winning ways in the Premier League when they lock horns with Wolves at Molineux on Monday night. And, Jurgen Klopp could be handed a boost on the team news front ahead of his side’s latest fixture.

Roberto Firmino could be in contention to make his return to action if he recovers sufficiently from a knee injury. Klopp did provide an update on the Brazilian during his pre-match press conference, saying, “We will see. Bobby was not with us, that means he couldn’t play.”

“Now we have a few more days and later on, we have the medical meeting actually after the press conference – sorry! – so they will give me more information about that. We will see, two more days, hopefully. [It] looks like in the moment [everybody else is fit].”

Firmino, though, is unlikely to make the starting lineup, judging by Klopp’s comments, meaning Diogo Jota should once again feature in the Liverpool attack. The former Wolves forward will essay the false nine role that Firmino usually reprises, with Mohamed Salah and Sadio Mane starting alongside him in the final third.

The big decision in midfield will surround Fabinho, following his first start as a holding midfielder in ages last week against RB Leipzig in the UEFA Champions League. Klopp was probed on the possibility of Fabinho playing in midfield again, to which he replied, “Fabinho helps everybody on the pitch in both directions if he can play his natural position.”

“That’s it. It’s just that easy to say. And yes, that means then it makes life easier for Thiago as well. When Fabinho can play the ‘six’, it’s obviously for him the best position and for us it’s the best position for him as well.”

Fabinho should once again sit at the base of the three-man midfield, with Thiago Alcantara and Georginio Wijnaldum completing the unit in the middle of the park. As for defence, the likes of Joel Matip, Joe Gomez and Virgil van Dijk remain unavailable and Klopp provided an update on the trio.

“We all hope that they [Gomez and van Dijk] will be ready to start the pre-season with us. That’s what we hope. And, by the way, with Joel it’s pretty much the same. The two of them [Gomez and Van Dijk] look in the moment better than Joel looks because he’s still in his [what] looks like skiing boots. But he is here as well. Joe is not running, Virgil is already running, but this is really a tough one.” 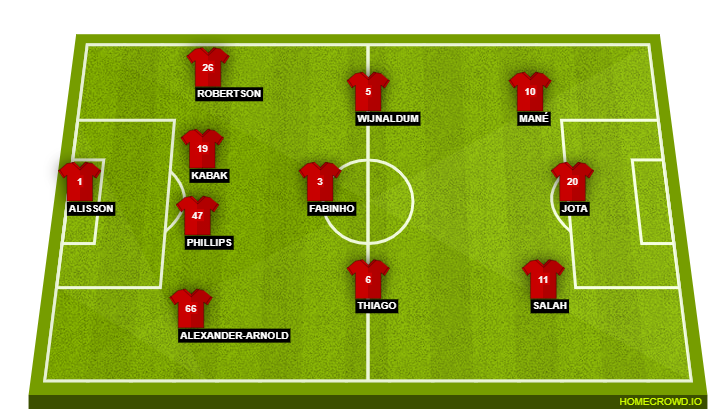 In the absence of Matip, Gomez and van Dijk, Nat Phillips and Ozan Kabak should once again pair up at the heart of the Liverpool defence, following a solid showing against Leipzig. Trent Alexander-Arnold and Andrew Robertson pick themselves as the two full-backs, with Alisson Becker starting in goal.